Researchers reveal that SARS-CoV-2 is more infectious than SARS-CoV because it can use both ACE2 and neuropilin-1 to infect cells. 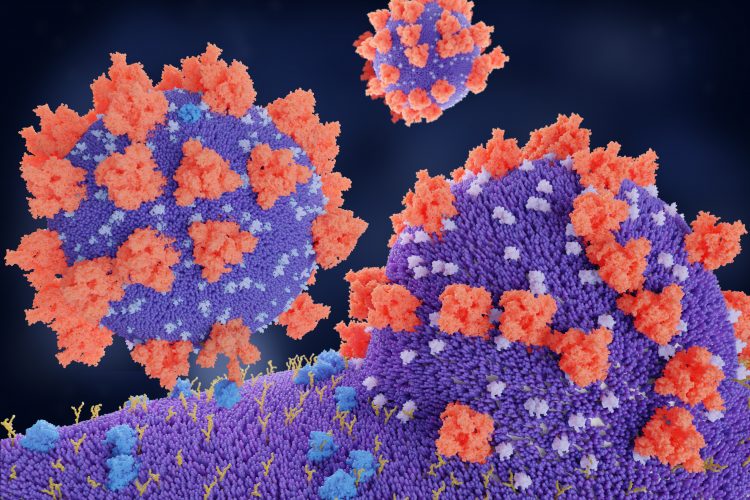 In trying to understand why SARS-CoV-2, the virus that causes COVID-19, is so much more infectious than its predecessor SARS-CoV (which causes Severe Acute Respiratory Syndrome), researchers have discovered that it can also use a receptor called neuropilin-1 to infect cells.

The discovery published in Science was made by a German-Finnish team of investigators, led by neuroscientists Mika Simons, Technical University of Munich, Germany, and virologist Dr Giuseppe Balistreri, University of Helsinki, Finland.

While scientists established early on in the COVID-19 pandemic that SARS-CoV-2 uses the angiotensin converting enzyme 2 (ACE2) receptor to bind to and infect human cells, researchers questioned how SARS-CoV-2 could spread so differently to its predecessor – the SARS-CoV virus – when they both infect cells via the ACE2 receptor.

Dr Balistreri, head of the research group Viral Cell Biology at the University of Helsinki involved in the study, explained that “viruses often use multiple factors to maximise their infectious potential”. Adding that the high infectivity of SARS-CoV-2 is because it infects both the upper and lower respiratory system, where typically respiratory viruses only infect the lower. Infecting upper airway cells means the virus is shed when people talk and breathe on top of when they cough or sneeze.

To understand the differences in spread between SARS-CoV and SARS-CoV-2, the team collaborated with Professor Olli Vapalahti from the University of Helsinki and compared the structure of their respective viral surface spike proteins using genomic sequences. Dr Balistreri revealed: “Compared to its older relative, the new coronavirus had acquired an ‘extra piece’ on its surface proteins, which is also found in the spikes of many devastating human viruses, including Ebola, HIV and highly pathogenic strains of avian influenza, among others.”

Through a further collaboration with virologist Ari Helenius at ETH Zurich, Switzerland, and cancer biologist Professor Tambet Teesalu from the University of Tartu, Estonia, the team were able to show that this extra piece binds to neuropilin-1, a receptor on the surface of human cells.

The international collaboration, including more than 30 scientists from Germany, Finland, Estonia and Australia, then explored whether neuropilins were important for SARS-CoV-2 infection.

When they specifically blocked neuropilin-1 with antibodies, the team where able to significantly reduce infection in laboratory cell cultures. “If you think of ACE2 as a door lock to enter the cell, then neuropilin-1 could be a factor that directs the virus to the door. ACE2 is expressed at very low levels in most cells. Thus, it is not easy for the virus to find doors to enter. Other factors such as neuropilin-1 might help the virus finding its door,” commented Balistreri.

Interestingly, an independent team of scientists at the University of Bristol, UK, has obtained similar results and confirmed that the virus spike binds directly to neuropilin-1, their study was published in Science.

Balistreri concluded: “it is currently too early to speculate whether blocking directly neuropilin could be a viable therapeutic approach, as this could lead to side effects. This will have to be looked at in future studies. Currently our laboratory is testing the effect of new molecules that we have specifically designed to interrupt the connection between the virus and neuropilin. Preliminary results are very promising and we hope to obtain validations in vivo in the near future.”