Role of retrons in bacteria revealed, with potential for use in gene editing

The role that retrons in bacteria has been discovered by researchers, who found they protect colonies when infected by viruses. 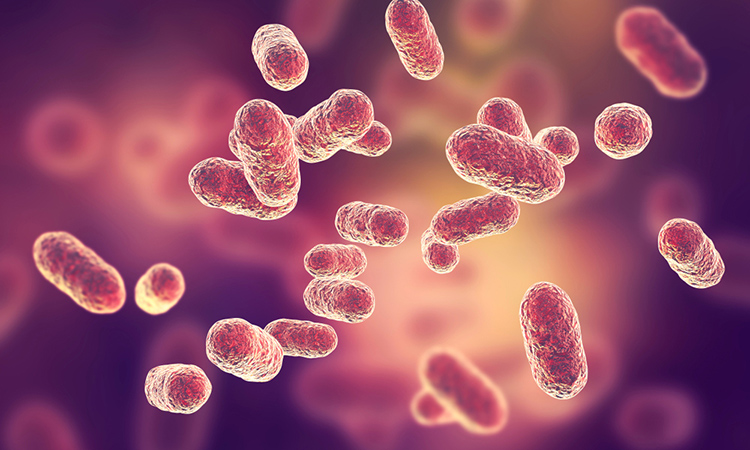 A team has revealed the role that retrons play in bacteria; they serve as an immune system to “guard” bacterial colonies when infected by viruses. The study was conducted at the Weizmann Institute of Science, Israel.

According to the researchers, retrons are hybrid structures that are half RNA, half single-strand DNA and are found in many species of bacteria. Since their discovery around 35 years ago, scientists have learned how to use retrons for producing single strands of DNA in the lab, but no one knew what their function was in bacteria.

Now, the researchers have found that retrons guard bacteria when infected by viruses. In addition to this, the team revealed many new retrons that they say may add to the genome-editing toolkit.

The study was conducted in the lab of Professor Rotem Sorek. Sorek and his team were seeking new elements of the bacterial immune system, specifically elements that help bacteria to fend off viral infection. When they uncovered the unique signature of retron within a bacterial defence island, the team investigated further.

Their initial research showed that this retron was involved in protecting bacteria against the viruses known as phages. The researchers found that the retrons were always connected – physically and functionally – to one other gene. When either the accompanying gene or the retron was mutated, the bacteria were less successful in fighting off phage infection.

The scientists then looked for more such complexes. They identified around 5,000 retrons, many of them new, in different defence islands of numerous bacterial species.

To check if these retrons generally function as immune mechanisms, the team transplanted many retrons into laboratory bacterial cells that were lacking retrons. As they suspected, in a great number of these cells they found retrons protecting the bacteria from phage infection.

The researchers discovered that the retron’s function is to cause the infected cell to commit suicide. Further investigation showed that retrons do not sense the phage invasion itself, but rather keep watch on another part of the immune system known as RecBCD, which is one of the bacterium’s first lines of defence. If it realises that the phage has tampered with the cell’s RecBCD, the retron activates its programme through the second, linked genes to kill the infected cell and protect the rest of the colony. 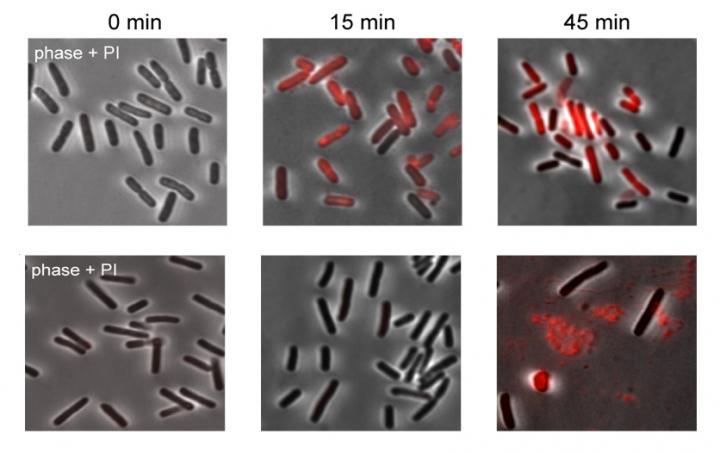 Top row: E coli bacteria containing a retron break apart the membranes in the cell around 15 minutes after infection (center) Red reveals holes in membranes as cells die. (Right) 45 minutes post infection with a phage, many cells have died, but a few remain to restart growth. Bottom: bacteria lacking this retron look fine after 15 minutes, but 45 minutes later, the infected cells have died and the viral DNA has spilled out, on its way into the remaining few cells [credit: Weizmann Institute of Science].

“It is a clever strategy and we found it works in a similar way to a guard mechanism employed in plant cells,” said Sorek. “Just like viruses that infect plants, phages come equipped with a variety of inhibitors to block assorted parts of the cell immune response. The retron, like a guard mechanism known to exist in plants, does not need to be able to identify all possible inhibitors, just to have a handle on the functioning of one particular immune complex. Infected plant cells apply this ‘abortive infection’ method, killing off a small region of a leaf or root, in an effort to save the plant itself. Since most bacteria live in colonies, this same strategy can promote the survival of the group, even at the expense of individual members.”

Retrons are useful to biotechnology because they begin with a piece of RNA, which is the template for the synthesis of the DNA strand. This template in the retron sequence can be swapped out for any desired DNA sequence and used, sometimes in conjunction with another tool borrowed from the bacterial immune toolkit – CRISPR – to manipulate genes in various ways. Sorek and his team believe that within the diverse list of retrons they identified may be hiding more than a few that could provide better templates for specific gene editing needs.

Whitepaper: How to monitor and minimise off-target events