Red propolis could be a better treatment for schistosomiasis

Investigators found that red propolis can kill schistosomes at all stages of development and therefore suggest it could be highly effective for treating schistosomiasis. 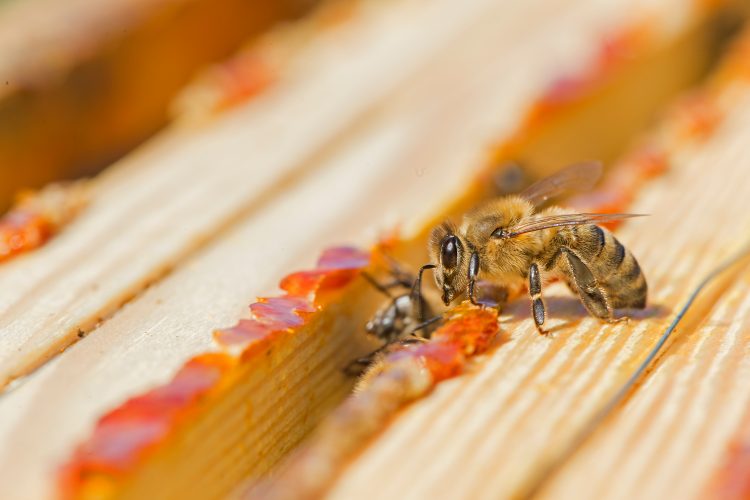 Bees laying red propolis at the edges of their hive. The propolis resin protects the hive from bacteria and fungus.

A new study has demonstrated that Brazilian red propolis can significantly reduce the parasite load in mice infected with the Schistosoma mansoni flatworm. The researchers found that red propolis is equally effective against both the eggs and the mature parasite, where current the treatment focuses on just the adult worms, and therefore suggest that the traditional medicine could be highly effective in treating schistosomiasis, the disease caused by infection with S. mansoni, and potentially other parasitic infections as well.

Brazilian red propolis is a natural resin produced by honeybees that has been used in traditional medicines for years. It contains more than 20 biologically active compounds and has well established bactericidal and antifungal properties.

In experiments performed at Universidade Guarulhos (UnG) in Brazil, researchers found that 400mg of red propolis per kilogram of body weight was sufficient to reduce the parasite load by more than 60 percent in mice infected with S. mansoni. They also found it was equally effective against the immature and adult stages of the parasite and that it could prevent the parasites reproducing and laying eggs in vitro. Because of its ability to target both immature and adult helminths (worms) the team suggest red propolis may be a more effective treatment for schistosomiasis than Praziquantel – the only drug currently available for the disease.

Josué de Moraes, a professor at UnG and last author of the article on the study published in the Journal of Ethnopharmacology, said schistosomiasis is the most common disease caused by helminths and affects more than 300 million people worldwide. Despite its high prevalence in tropical and subtropical areas, it has been treated with a single drug for about 40 years.

“Praziquantel is effective but has major limitations,” Moraes said. “In contrast with what we found in the study with red propolis, the drug does not combat infections caused by the immature stage of the parasite. It kills only adult worms, so patients have to wait until the growth cycle reaches the adult stage to start the treatment, by which time the infection has become chronic.”

He added that some schistosome strains have developed resistance to Praziquantel after 40 years of use and that to date the US Food and Drug Administration (FDA) has only approved two anthelmintics.

To overcome these issues, Moraes is leading a research project at UnG’s Center for Research on Neglected Diseases (NPDN) to repurpose drugs that could combat schistosomes. They have so far tested 73 nonsteroidal anti-inflammatory drugs and found five to be effective against the parasite, with mefenamic acid (widely used for menstrual period pain relief) exhibiting the most promising results to date. 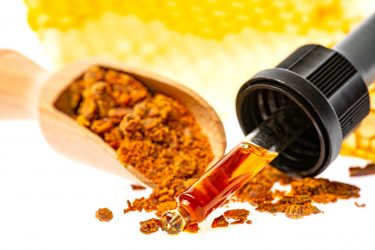 Red propolis granules on a wooden spoon and a dropper containing an amber liquid (propolis tincture).

Moraes and colleagues said they decided to study the effects of red propolis as part of the project because it had been fully characterised by other Brazilian researchers who found it had potent antimicrobial and anti-inflammatory properties.

“Our study did not investigate the mechanism of red propolis in the schistosome but analysed the action of red propolis extract indirectly using scanning electron microscopy. For example, we set out to see if this natural product, which is made up of several substances, could get through the parasite’s integument. This would increase its power to reach one or more targets and kill the worms, but we did not identify any targets,” explained Moraes.

He also said that green and brown propolis are likely to have the same effect on schistosomiasis and that their findings could be applicable to other parasitic infections: “The schistosome is a model for the study of infections in humans and animals caused by other flatworms, or platyhelminths, such as tapeworms of the genus Taenia. The discovery, therefore, creates an opportunity for research relating to the treatment of other diseases that affect humans, cats and dogs, that are also treated with praziquantel.” But cautioned that human studies would be required to ascertain its full potential.