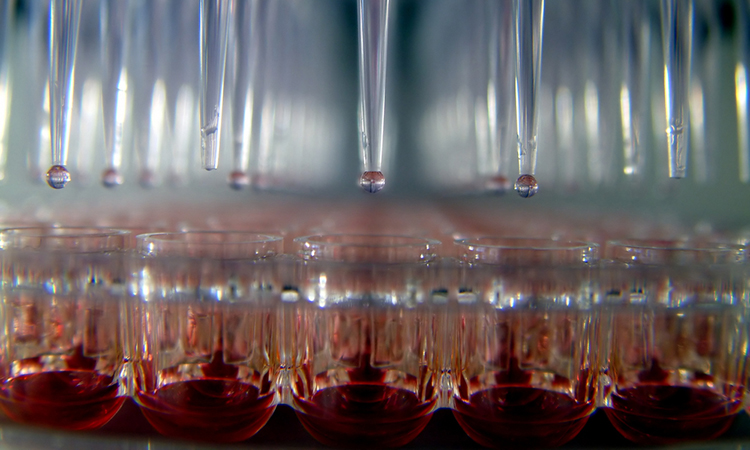 A research team at the University of Bonn, Germany, has used high-throughput screening to discover two families of active substances that can block the replication of the SARS-CoV-2 coronavirus. According to the scientists, the drug candidates are able to switch off the key enzyme of the virus, the main protease (Mpro).

The team explain that for the SARS-CoV-2 coronavirus to replicate, it relies on the Mpro as a key enzyme. The virus first has its genome translated from RNA into a large protein strand. The viral main protease then cuts this protein chain into smaller pieces, from which the new virus particles are formed.

“The Mpro is an extremely promising starting point for coronavirus drug research,” said Professor Christa Müller, one of the lead researchers. “If this enzyme is blocked, viral replication in the body’s cells is stopped.”

The pharmaceutical chemists designed a large number of potential inhibitors based on the structure of the Mpro and the mechanism by which the important virus-replicating enzyme works.

The researchers next developed a new test system for high-throughput screening. They offered the SARS-CoV-2 Mpro a substrate to which a reporter molecule was coupled. When the protease catalytically cleaved this coupling, the fluorescence of the product was measurable. However, if a simultaneously administered inhibitor successfully blocked the activity of the protease, there was no fluorescence.

“For most of the test compounds, we observed no enzyme inhibition. However on rare occasions in our comprehensive tests, fluorescence was suppressed. These were the hits we had hoped for in our search for inhibitors of the viral protease,” said Professor Michael Gütschow, who heads an independent research group on such inhibitors.

The high-throughput screening showed two classes of drugs that appeared to be particularly promising. Customised compounds of both classes were then newly synthesised by the team. They found that these stick to the Mpro like chewing gum and block the crucial catalytic centre, which prevents the protease from preparing viral replication.

“Some of the compounds even have another effect,” Müller reported. “They also inhibit a human enzyme that helps the virus enter body cells.”

The team emphasises that extensive clinical trials have yet to prove whether these candidates also inhibit SARS-CoV-2 replication in humans.

The results have been published in Angewandte Chemie.