Despite being one of the more ancient aspects of immunity, therapeutic modulation of the innate immune system has rarely been attempted. Innate immunity is intrinsically linked to the generation of inflammation – necessary for signalling to the adaptive immune system but often self-perpetuating and over-exaggerated, leading to deleterious effects, including sepsis…

The ability to selectively separate the inflammatory response from the anti-infective response of the innate immune system has only recently been recognised.1 Moreover, the complexity of the innate immune response, both in circulating cells and in tissue-resident cells (eg, tissue-resident macrophages and innate lymphoid cells) contributes not only to immunity but also to control of tissue homeostasis.2 Thus, innate immunity may play a significant role in the development of cancer, atherosclerosis, inflammatory bowel disease, rheumatoid arthritis, fibrosis, neurodegenerative disorders, wound healing and chronic inflammatory lung diseases.

Initial attempts to modulate the innate immune system (eg, through the use of TLR agonists such as CpG for treatment/prevention of viral infection) targeted the receptors and, therefore, turned the entire system ‘on’ or ‘off’ including inflammation, limiting the range of therapeutic utility. The innate immune system is characterised by a plethora of receptors (eg, toll-like receptors [TLRs], nucleotide-binding oligomerisation domain [NOD]-like receptors [NLRs], and RIG-I like receptors [RLRs]) each recognising different patterns indicative of bacterial, fungal or viral infection, genotoxic stress or tissue damage. The ‘pre-programmed’ responses of these receptors enable the innate immune system to perform with its hallmark rapidity with no need for individual ‘memory’ to be developed. Recently, the complexity of the innate immune system, including the concept of epigenetically-controlled ‘trained memory’, has been revealed, with the discovery of further subtleties in cell type and cell function ongoing.2 The consequences of triggering the innate immune system also results in the initiation of different signalling cascades. Interestingly, however, there has been some evidence of significant consolidation of these signalling networks at the intracellular level – for example, most TLRs signal through either MyD88 or TRIF signalling factors, and even these factors can be linked to each other.3-6 Targeting the convergence of these signalling pathways may yield the ability to modulate different and unique aspects of the innate immunity, rather than just a binary on/off response.

An example of the broad-ranging potential of innate immune modulation is reflected in the nonclinical and clinical studies conducted with Innate Defense Regulators (IDRs). These novel compounds target the convergence of intracellular innate immune signalling networks by binding directly to the scaffold protein p62 (also known as sequestosome-1). p62 does not have enzymatic activity but rather is involved in binding multiple proteins, bringing them in close proximity and augmenting signalling networks.3-6 By binding to the ZZ domain of p62, IDRs augment protein-protein complex formations and thus enhance specific signalling pathways (Figure 1).3 For example, IDRs enhance expression of the C/EBPb while leaving NFkB expression unchanged. Thus, inflammatory signalling through NFkB is not modulated, while other pathways (including chemokine/cytokine expression profiles) are enhanced via C/EBPb. Ultimately, this results in an increased recruitment of macrophages to the site of infection while suppressing inflammatory signalling (and enhancing anti-inflammatory signalling).4 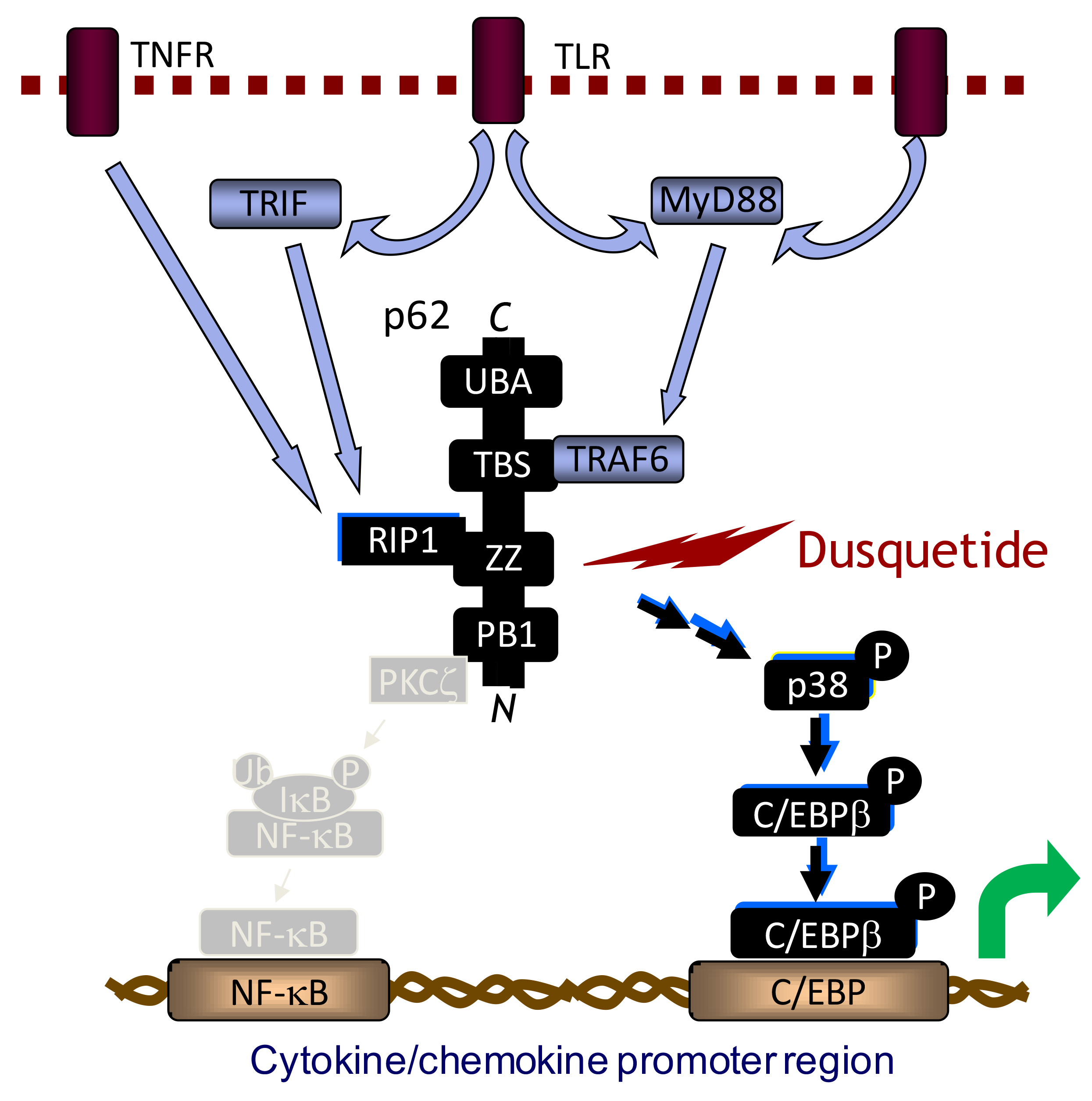 Figure 1: Dusquetide, the lead clinical IDR, binds to the ZZ domain of p62, altering downstream signalling of the innate immune system. Dusquetide specifically binds to the ZZ domain of p62 and selectively stabilizes TNFα-induced p62-RIP1 complex formation with no effect on TNFα-induced p62-PKCξ complex formation. Dusquetide specifically modulates downstream pathways by activating MAPK p38 and C/EBPβ and resulting in modulation of cytokine/chemokine production, altered protein expression in endothelial cells and monocytes, and increased macrophage recruitment to the site of infection/damage.

Nonclinical studies with the lead IDR, dusquetide, have demonstrated enhanced bacterial clearance, increased survival and synergy with antibiotic therapy.8 A noteworthy consequence of this mode of action is the lack of direct action on bacteria – thereby likely circumventing the ever-increasing problem of antibiotic resistance. Moreover, because all bacteria activate the innate immune system in some manner, the IDR response is applicable irrespective of the specific pathogen, with activity demonstrated with Gram-negative and Gram-positive, intracellular and extracellular, and antibiotic-resistant or antibiotic sensitive pathogens.8,5 Targeting the innate immune system to treat infection has a number of potential clinical advantages, including:

Given the role of innate immunity in tissue homeostasis, IDRs have also been evaluated in nonclinical and clinical studies of oral mucositis. Oral mucositis is a debilitating side effect of cancer treatment regimens (both radiation and/or chemotherapy) where the tumour treatment kills cells, triggering the dying cells to release damage-associated molecular patterns (DAMPs) and initiate the innate immune response. Unfortunately, the inflammatory component of the innate immune response exacerbates the underlying tissue damage, resulting in painful inflammation and ulceration throughout the gastrointestinal tract, including the mouth and throat. Severe oral mucositis, characterised by significant ulceration that inhibits eating and/or drinking, is one of the most painful side effects of cancer treatment and can lead to increased hospitalisations, infections and may ultimately cause patients to halt their tumour treatment. Treatment of oral mucositis must not interfere with the tumour while mitigating the secondary amplification of the innate immune system and ideally enhancing tissue healing. Studies with dusquetide in both radiation- and chemotherapy-induced oral and lower gastrointestinal mucositis demonstrated a significant potential to treat oral mucositis, yielding a 50 percent reduction in the duration of oral mucositis observed.6 Moreover, a completed Phase 2 clinical study of oral mucositis in head and neck cancer (HNC) patients similarly revealed at least a 50 percent reduction in the duration of severe oral mucositis in patients treated with at least 55Gy of intensity-modulated radiation therapy with concomitant cisplatin chemotherapy. About three-quarters of these patients experience severe oral mucositis, which can last for as long as 40 days. Of note, in addition to reducing the oral mucositis, treatment with dusquetide also resulted in a reduced rate of infections recorded as adverse events, also supporting the anti-infective activity of dusquetide observed in nonclinical studies.

Immunotherapy in cancer treatment has been largely focused on the modulation of the adaptive immune response (eg, T-cells, PD1 ligands, etc.). These studies have revealed the significant role that the tumour microenvironment plays in facilitating tumour growth and this microenvironment also intrinsically involves the local tissue innate immune response. The potential role for innate immunity in this setting is perhaps best characterised in the context of multiple myeloma, where p62 expression on stromal cells is known to modulate IL-6 expression and facilitate (or not) growth of the multiple myeloma cells in bone.7 Interestingly, preliminary nonclinical studies with dusquetide demonstrated an apparent ability to modulate both stromal cell support of multiple myeloma cells, as well as a potential effect on tumour cell lines (eg, MCF7 breast cancer cell line). Clinically, the Phase 2 study in oral mucositis in HNC patients revealed that not only did dusquetide not interfere with tumour treatment, but it may also have contributed to an accelerated rate of tumour resolution.8

One of the long-standing concerns in the modulation of innate immunity has revolved around any consequent impact in inflammation and adaptive immunity. Extensive nonclinical and clinical studies with dusquetide have demonstrated that there is no systemic inflammatory response of note and no interference with the adaptive immune system has been identified,8,10,11 demonstrating that, at least in these instances, innate immune modulation is associated with a benign safety profile.

As our understanding of the comprehensive and complex innate immune system increases, new opportunities to develop novel treatments for a range of indications – from infection to acute inflammation to cancer – may be significantly enhanced. The potential of innate immune modulation, particularly that focused on the integrated intracellular signalling networks, has been demonstrated by one of the first innate immune modulators in clinical development and highlights promising avenues for future research.

Dr Oreola Donini has more than 15 years of experience in drug discovery and preclinical development with start-up biotechnology companies and has been instrumental in leading early stage development of novel therapies into the clinic. She is a co-inventor of the Innate Defense Regulator technology. Her research has spanned drug discovery, preclinical development, manufacturing and clinical development in infectious disease, cancer and cancer supportive care. Dr Donini is a Senior Vice-President and the Chief Scientific Officer with Soligenix. She received her PhD from Queen’s University in Kingston, Ontario, Canada and completed post-doctoral work at the University of California, San Francisco.

Richard C Straube has over 35 years of experience and is a board-certified paediatrician with clinical research experience in host-response modulation, most notably with Centocor, Ohmeda Pharmaceuticals, INO Therapeutics, and Stealth Peptides, Inc. At Centocor, Dr Straube was responsible for anti-cytokine and anti-endotoxin programmes in infectious disease and immunology. Dr Straube received his medical degree and residency training at the University of Chicago, completed a joint adult and pediatrician infectious diseases fellowship at the University of California, San Diego, and completed training in clinical trial design at the London School of Hygiene and Tropical Medicine as a Milbank Scholar.

Christopher J Schaber has over 29 years of experience in the development of new drug therapies to treat rare diseases and areas of unmet medical need. Previously, he served as Chief Operating Officer of Discovery Laboratories, Inc., where he was responsible for overall pipeline development, including pre-clinical and clinical research, medical affairs, manufacturing, regulatory affairs, and quality control and assurance, as well as coordination of commercial launch activities. Dr Schaber received his BA from Western Maryland College, his MS in Pharmaceutics from Temple University School of Pharmacy and his PhD in Pharmaceutical Sciences from the Union Graduate School.