From the world’s flagship neutron science facility, Institut Laue-Langevin (ILL), Matthew Blakeley shares insights into how they are harnessing the power of neutrons to aid their search for new cancer treatments.

Understanding cancer – from anatomic to atomic

understanding regular, functional molecular processes within the body is fundamental to ensuring the appropriate pharmaceutical response is implemented when something goes wrong

Cancer is the second most common cause of death globally,1 killing an estimated 9.6 million people in 2018. Our understanding of cancer biology and treatments – both surgical and pharmaceutical – has progressed significantly over the last 100 years. Many theories have been recorded2 over the past few centuries to explain why cancer develops; including the possibility of parasites, trauma or chronic irritation leading to tumour development. In the 20th century, the elucidation of DNA structure and subsequent discovery of oncogenes and tumour suppressor genes opened our eyes to the endless potential causes of cancer, with scientific and technological advances in imaging enabling this deeper understanding. Much progress has been made in the characterisation and treatment of cancer thanks to these technological advancements and finding new leads to treat the illness will likely rely on the optimisation of many analytical techniques.

Understanding regular, functional molecular processes within the body is fundamental to ensuring the appropriate pharmaceutical response is implemented when something goes wrong. A seemingly insignificant alteration to a common protein or pathway could result in the development of malignant cells, leading to widespread cancer growth.

Visualising the miniscule details of binding or replication processes in the body could reveal new targets for oncological drugs at the location where malfunction occurs. This requires the most powerful analytical techniques that can reveal the precise position of atoms involved in the process. Neutron scattering is one such technique that provides unique insight into these interactions. A non-destructive and powerful tool, neutrons are proving to be an impressive weapon in the search for new oncological drug targets. A recent study carried out by scientists from across Europe and the US exemplifies how insights from neutrons are aiding the fight against cancer.

Galectins – a protein with cancerous connections 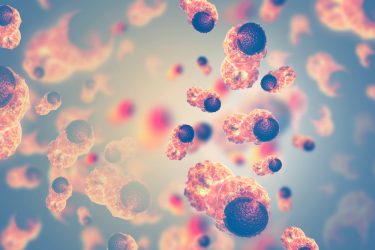 At the Institut Laue-Langevin (ILL), the world’s flagship neutron science facility, exploration into those proteins and enzymes linked to cancer has been underway for many years. This recent research,3 published in the Journal of Medicinal Chemistry, examines galectin-3, a sugar-binding protein found in most cells throughout the body. The galectin family attaches to other proteins via the carbohydrates on their surface, which thus impacts a range of processes in the cell associated with disease, including many cancers. Galectin-3, when overexpressed, can enhance the adherence of breast cancer cells to other cells in the human body, suggesting it plays a role in tumour development and possibly the way that cancer spreads through the body – a process called metastasis.4 Breast cancer is the most common cancer in women worldwide, with over 2 million new cases diagnosed in 2018 alone,5 thus the identification of new drug targets is an area of immense interest.

Given the widespread impact of the galectin protein, characterising the binding process could aid the design of inhibitory drugs, blocking the process and potentially limiting the development of diseases such as cancer. However, a complete picture of the exact mechanisms at play has so far eluded researchers and the precise details have not been well defined. The hydrogen bond networks, which are highly influential in the actions of the protein, can be difficult to visualise with many analytical tools, due to the small size and lightness of the hydrogen atom. Scientists have previously relied on X-ray crystallography, which, although powerful, cannot accurately determine the position of the hydrogen atoms, even with the most high-resolution structures (better than 0.1nm). Here, neutron crystallography can provide unique insight into the structure of this potential drug target.

The power of neutrons

Intense beams of neutrons, when fired at a sample, can explore deep inside matter via interaction with the nuclei. This provides an incredibly detailed picture of the atomic structure, as well as the magnetic interactions within the substance, which can be helpful in the characterisation of materials.

intense beams of neutrons, when fired at a sample, can explore deep inside matter via interaction with the nuclei

As neutrons are non-destructive and can investigate deep inside matter, they make an ideal probe for materials, including biological or sensitive samples that may be disturbed by X-ray radiation, which includes the galectin proteins. A more disruptive tool would provide a less accurate picture of the carbohydrate-binding process that occurs in the human body, potentially destroying the sample. Neutrons are also ideal for determining the position of light elements within a substance, such hydrogen or lithium. The collaboration with Lund University, Sweden, was carried out using the LADI-III instrument at the ILL, as well as neutron instruments at Oak Ridge National Laboratory (ORNL) and Heinz Maier-Leibnitz Zentrum (MLZ). Even with more modest resolutions (around 0.2nm) and at room temperature the researchers could identify, for the first time, the precise details of the hydrogen bonding network in the galectin-3 binding process. Neutron crystallography is the most powerful technique for revealing such critical interactions and has massive potential in the field of cancer drug discovery.

Another example of cancer research benefitting from the power of neutrons was a study of protein kinase G II (PKG II). Conversely to galectin-3, which is linked to cancer when overexpressed, this protein can increase the risk of stomach cancer when it is not activated. Thus, researchers are keen to understand the intricacies of how the protein interacts with its known activators, enabling drug developers to exploit this information in future cancer therapy treatments. The globally collaborative research,6 involved crystals grown by researchers Andrey Kovalevsky and Oksana Gerlits at ORNL, using PKG II protein provided by Choel Kim from the Baylor College of Medicine in Texas. The crystals were exposed to neutrons at the ILL’s LADI-III beamline and the resulting structure made it possible to observe the hydrogen-bonding interactions during the activation of PKG II, providing insights to the enzyme’s activation mechanisms.

The results suggest that the activator’s potency depends on its ability to efficiently decrease overall protein dynamics. While further studies are needed to identify how potent activators must be to bind the strongest; if confirmed, the results will be highly significant for future drug development across a range of diseases. This is particularly true considering ~2 percent of all human genes encode for protein kinases, and over half of these are linked to various diseases such as cancer and diabetes.7 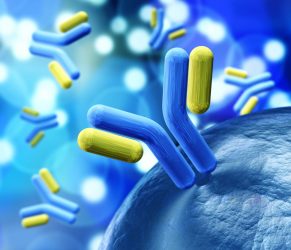 As well as characterising ordinary cell processes in order to identify drug targets, neutron beams are increasing our understanding of a growing group of cancer pharmaceuticals: the monoclonal antibodies (mAbs). These are being utilised against cancer, as well as other diseases, due to their highly-specific targeting abilities. They can be refined so that they attach themselves to specific protein targets on cancerous or disease-causing cells. Despite the huge potential of mAbs as a therapeutic, they can be difficult to manipulate into a format that can be administered to patients. High concentrations of antibodies are required in each dose to be effective, which results in a solution that is viscous and thus physically impossible to inject. Their tendency to clump together – part of the reason for their efficacy in tackling malignant cells – also means that the exact concentration is difficult to predict in solution.

In international collaborative research8 between the ILL, National Center of Neutron Research, University of Delaware and biopharmaceutical company Genentech, the researchers used Small Angle Neutron Scattering (SANS) and Neutron Spin-Echo (NSE) to study the structure and dynamics of mAb clustering. Neutrons are exceptionally capable of analysing the extremely high concentrations in the mAb samples that are required for the high doses present in the injectable forms. The ILL instruments provide unrivalled high-resolution and neutron intensity, which enabled the researchers to confirm that the challenging properties of the mAb solutions came from previously unnoticed small clusters in the solution. NSE is the most sensitive neutron spectroscopy technique. The IN15 Spin-Echo spectrometer has world-leading sensitivity that can unravel molecular-level motions and interactions. As a result, the potential of mAbs to be used in the treatment of various cancers becomes more achievable as its administration becomes more accessible to patients and practitioners.

As our understanding of the human body expands, so does our ability to identify pathways and address causes of disease, allowing us to develop innovative drugs to intervene in these malignant processes. Cancer, being so inextricably linked to both our DNA and our lifestyles, requires the most powerful and fine-tuned analytical tools to identify its inception and progression. The ILL’s arsenal of the most advanced neutron crystallography instruments in the world enables its teams of researchers to explore and discover new ways to treat this widespread and devastating illness, by looking directly at the molecular mechanisms that can so often go wrong and discovering new drugs to fight it.

MATTHEW BLAKELEY is a research scientist at the Institut Laue-Langevin (ILL) in Grenoble. Graduating from Manchester University in 1999, Matthew completed his PhD in neutron crystallography in 2003, before undertaking postdoctoral research at the EMBL. Since 2007, Matthew has been responsible for the LADI-III beamline at the ILL.