A circuit involved in itching: from skin to sensory neurons

Dr Santosh Mishra and Srisruti Bontala explain how they discovered a new cutaneous-nerve pathway for allergic itch in atopic dermatitis. 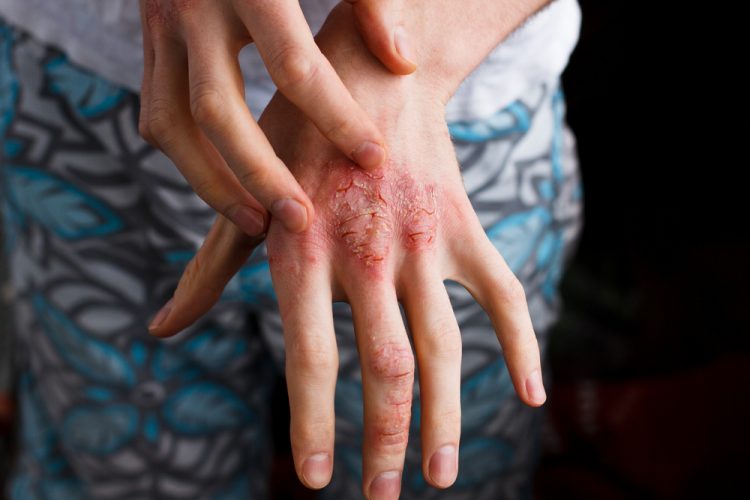 Atopic dermatitis (AD) is a chronic inflammatory skin condition characterised by pruritic, erythematous and scaly lesions often localised on the surfaces of the body.1 Chronic itch is one of the more significant symptoms associated with individuals suffering from AD that affects the skin of both humans and companion animals.

Although several factors play an important role in AD, in our recent study we focused on the endogenous protein periostin, known to be abundantly present in the skin of AD individuals from humans to animals.2,3 Periostin is an extracellular matrix protein belonging to the fasciclin family and it plays a critical role in the remodelling and repairing of damaged tissues.4 The protein is also vital for the restoration of tissue because it supports the adhesion and migration of epithelial cells, the first line of defence that exists on the surfaces on an organism’s body – for example, the skin, blood vessels and urinary tract. These cells act as a barrier between the outside and inside of the body to block infections and/or allergens.

The role of periostin in AD pathogenesis has been known for a while, but its direct role in the induction of itch was completely unknown. So, in this study, we investigated the direct role of periostin in acute itch5 and using cellular, molecular and pharmacological approaches, we showed the direct role of periostin in the propagation of itch. Furthermore, we identified that the integrin receptor αVβ3 is expressed on sensory neurons involved in the generation of itch sensation. Additionally, we demonstrated in two different mouse models – one using chemical MC903, a vitamin D3 analogue and the other using house dust mites for an allergen model – that periostin levels increased in the skin compared to vehicle-treated mice.

Overall, we identified that the endogenous protein periostin links the skin to the spinal cord through the sensory neurons that express αVβ3; this loop sends the itch signal to the brain via the spinal cord from the skin, resulting in an itching sensation for the organism.

However, the direct role of periostin in the propagation of itch sensation remains unidentified. To test the hypothesis of whether periostin is directly involved in the generation of itching, we injected recombinant mouse periostin subcutaneously in the models’ skin. To our surprise, we found a robust scratching behaviour in the mice. Since expression of periostin is conserved among three different species and is secreted at a higher level in AD among dogs and humans,2,3 we extended our experiment in dogs and monkeys to test if periostin injection induces itch in these animals. Unsurprisingly, we found periostin-induced itch in both dogs and monkeys.5 Since the injection was in the skin, which is composed of many different cell types including fibroblasts and immune cells (mast cells), we wondered if the itch response was due to the indirect effect of periostin. Mast cells are known to release many chemicals that can directly activate sensory neurons.

To exclude this possibility – if periostin-induced itch is not due to the activation of mast cells and other immune cells – we injected the protein in several different immune cell-deficient mice. We found no change in the itch response between wild type and knockout (KO) mice (B cells, T cells, natural killer cells and mast cells). Overall, our study suggests that periostin-induced itch is directly mediated through sensory neurons. 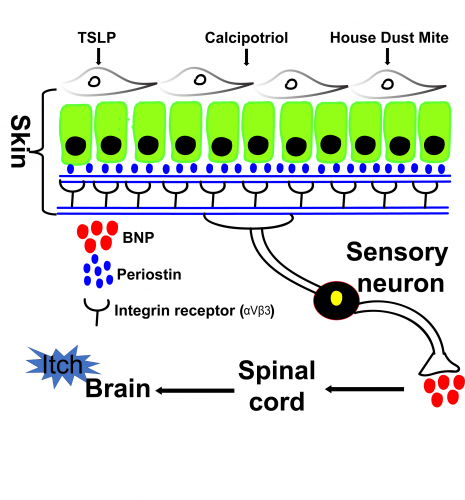 Figure 1: Illustration represents skin-neuronal connection for chronic allergic itch. Periostin releases in response to different chemicals/allergen. Released periostin from keratinocytes goes on to bind to the integrin receptor (αVβ3) that are expressed on the sensory neurons. Periostin-induced neuronal activations result in release of neuropeptide BNP, which via feed forward circuit transmits the itch signal to the brain through the spinal cord.

Periostin binds to integrin receptors in osteoblasts as well as several types of normal and tumour cells and elicits a variety of downstream signalling pathways.6-8 However, the expression of integrin receptors in dorsal root ganglia (DRG) sensory neurons remains elusive. Since we found periostin-induced itch in mice, dogs and monkeys, we became immediately interested in identifying the expression and function of integrins on DRG sensory neurons.

First, we used quantitative real-time polymerase chain reaction (qRT-PCR) to evaluate if integrin αV, β3, and β5 are expressed in the DRGs of mice, dogs and monkeys. We found the expression of all these subunits of integrin receptors expressed in all three species. Second, we used calcium imaging to confirm its functional appearance in the DRG sensory neurons. Third, we used the conditional knockout mice (CKO), where we eliminated one of the subunits β3 of the integrin receptor in TRPV1-lineage neurons9 to demonstrate that periostin-induced calcium influx is significantly reduced in CKO compared to control littermates. Finally, we showed that these CKO mice lost their itch responses to periostin.

In addition, we showed that brain natriuretic peptide (BNP) is involved in transducing a message from peripheral afferents to the spinal cord in response to periostin.5 Overall, we showed that αVβ3 is essential to transduce itch signals through peripheral sensory neurons.

The use of mouse models

We used two different mouse models to match the human manifestation of the AD. Human manifestation of AD is strongly associated with an increase in the IgE levels due to sensitisation to allergens including house dust mite (HDM) and in another chemically induced (Calcipotriol/MC903) AD-like inflammation in mouse skin.10,11 In both these models, we found an increase in periostin in the skin, which suggests periostin is the connecting link between skin to neuronal activation and in transmitting itch signals. We further showed that repeated topical application of vitamin D analogue MC903 once daily for seven days led to the AD-like skin inflammation. Interestingly, we found a significant reduction in itch responses in the CKO mice compared to control.

In brief, this suggests periostin-led scratching behaviour was attenuated in β3-deficient mice and further confirms the functional role of integrin receptors in DRG sensory neurons for acute and chronic itch.5

While our study identifies a new cutaneous-nerve pathway for the allergic itch, which is conserved among multiple species, several questions still remain unanswered that need to be addressed before we begin to think about the treatment of this complex allergic itch that affects millions of people around the world. 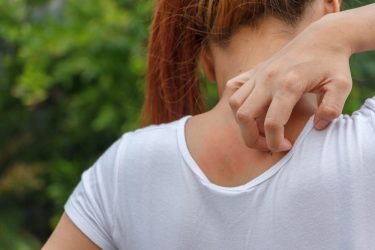 First, we need to identify the cell types in the skin that predominantly release periostin in AD. Second, periostin is involved in several other biological processes, so directly inhibiting its release may have some unwanted side effects. Blocking the integrin receptor on the DRG may perhaps provide an alternative target for drug development; however, because of the heterogeneity of the neuronal cell types in the DRG, it is important to first dissect the neuronal specific mechanisms that are involved in chronic allergic itch.

In short, our findings may open the gateway for the development of drugs that can offer the same results in humans to end the chronic itch in AD individuals and alleviate their suffering.

Dr Santosh Mishra completed his undergraduate and postgraduate degrees in India. He moved to Johann Wolfgang Goethe University (also known as Frankfurt University), Germany, and completed his Ph.D. in neurochemistry. He then joined the US National Institutes of Health/National Institute of Dental & Craniofacial Research (NIH/NIDCR) for his postdoctoral research work. Since January 2016, he has been appointed as an assistant professor in the department of Molecular Biomedical Sciences/North Carolina State Veterinary Medicine.

Srisruti Bontala is an intern in the Mishra lab at North Carolina State Veterinary Medicine. During her internship, Bontala was interested in gaining experiences in careers in the field of biology that provide her a deeper understanding of how the process of research works. She plans to continue volunteering and learning from new experiences.