Could GPCRs be causing people to respond differently to the same drug?

Hannah Balfour explores how genetic variation in G-protein-coupled receptors (GPCRs) and the proteins that regulate the duration of G protein signalling could be contributing to disease and people’s divergent responses to the same therapeutics. 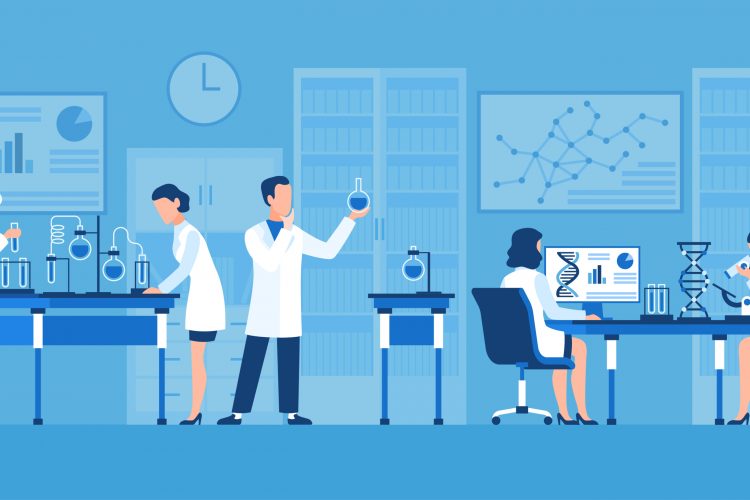 An introduction to GPCRs and RGS proteins

G-protein-coupled receptors (GPCRs) are one of the largest and most diverse families of proteins found in the mammalian genome.1 They primarily function to convert extracellular stimuli into intracellular signals, but because of their large number, widespread distribution and important roles in cell physiology and biochemistry, mutations in GPCRs are implicated in a range of acquired and inherited diseases.1

To date, over 600 inactivating and roughly 100 activating mutations in GPCRs have been linked with more than 30 human diseases,2 including endocrine disorders such as hypothyroidism, fertility disorders (hypogonadisms),3 cancers and neurodegenerative diseases like Alzheimer’s, to name just a few.

As of November 2017, an estimated 35 percent of drugs approved in the US or European Union (EU) targeted GPCRs.4 According to the same researchers, these drugs were directed at 134 different GPCRs, with GPCRs and GPCR-related proteins – ie, proteins upstream or downstream of GPCRs – representing roughly 17 percent of all protein targets for approved drugs (GPCRs alone account for 12 percent).

There is no consensus on the total number of GPCRs encoded for in the human genome and estimates vary widely, but genes for GPCRs could account for as much as one percent of the total human genome.5 Despite this, studies agree that their diversity is huge. According to Roth et al.,1 “the diversity of GPCRs is dictated both by the multiplicity of stimuli to which they respond, as well as by the variety of intracellular signalling pathways they activate.” External stimuli for these include environmental factors like light and smell, as well as chemical/molecular signals such as hormones, proteins, lipids and neurotransmitters.

GPCRs are cell surface proteins that couple to a G protein heterodimer inside the cell. G proteins consist of a Gα subunit and a βγ heterodimer. In the resting state, the Gα subunit binds guanosine diphosphate (GDP), forming Gα-GDP. When an agonist interacts with a GPCR, it induces a change in the conformation of the receptor that causes the exchange of GDP for guanosine triphosphate (GTP). As a result, the Gα subunit of the G protein uncouples from the βγ heterodimer and both go on to trigger various downstream signalling events, which depend on the makeup of the G protein coupled to the receptor. There are 18 known Gα subunits, five different β and 11 γ variants.1 To stop signalling, GPCRs can be internalised, facilitated by arrestin binding. 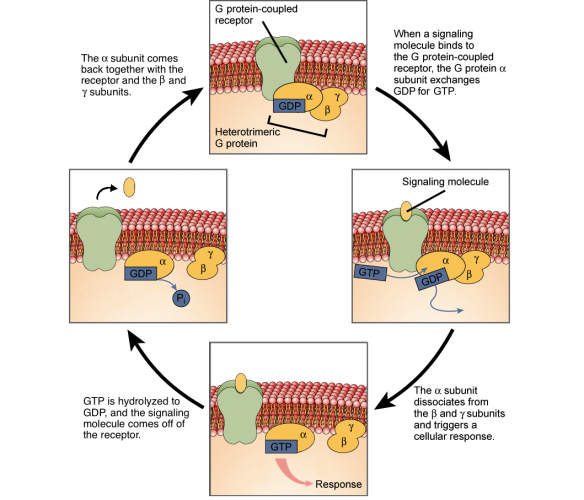 GPCR signalling can also be terminated by regulator of G protein signalling (RGS) proteins, which are an emerging family of GTPase-activating proteins (GAP) that can accelerate the hydrolysis of GTP bound to the Gα subunit by two orders of magnitude. Hydrolysis of GTP converts it back to GDP, inactivating the Gα subunit and causing re-association with the βγ heterodimer, thus terminating the downstream signalling effects of both Gα-GTP and βγ.6

A growing body of literature has described the roles of RGS proteins in a variety of conditions, including cancer, inflammation, cardiovascular processes and neuroinflammation. According to O’Brien et al.,7 targeting RGS proteins, instead of the upstream GPCRs, has advantages for drug specificity because different tissues expressing non-unique GPCRs (ie, those expressed in many cells/tissues) employ specific RGS proteins to control the signalling processes. Therefore, targeting the unique regulatory proteins would provide an increased level of specificity over targeting the GPCRs directly.

The study’s senior author Dr Kirill Martemyanov, professor and chair of the Department of Neuroscience at Scripps Research’s Florida campus, said that their study established how RGS proteins function normally and how they are implicated in disease to provide a basis for fixing the disorders they are associated with.

The researchers suggest that RGS proteins serve as a ‘reset button’ for cellular receptors and that without this function, cells are unable to stop passing along old signals and simultaneously prevented from picking up new ones. Martemyanov explained this phenomenon in the context of RGS regulation loss in the light-detecting cells of the retina: “Patients born with this condition cannot stop perceiving light, even when they go into a dark room and they cannot track moving objects very well because they lack the normal visual refresh rate.” He added that this loss of RGS protein regulation could be particularly devastating if it occurs in either the heart or the brain, where timing is vital for function.

In their study, Martemyanov and colleagues studied how each of the 20 canonical RGS proteins found in human cells selectively recognises and regulates its G protein counterparts using real-time kinetic measurements in living cells. The data reveals the rules underlying RGS-Gα subunit recognition and creates a map of how GPCR signals are routed in cells.

The study’s first author Dr Ikuo Masuho, staff scientist in the Martemyanov lab, explained: “This selective recognition of G protein subunits turns out to be performed by a few elements in each RGS protein – elements organised in a pattern resembling a barcode.”

Through their analysis of more than 100,000 genomes, the team identified mutations and common variations in RGS barcode regions which were able to disrupt Gα subunit recognition by RGS proteins. These mutations could either prevent recognition of Gα subunits, eg, a mutation in RGS16 which has been linked to insomnia or cause RGS proteins to incorrectly recognise the wrong subunit. 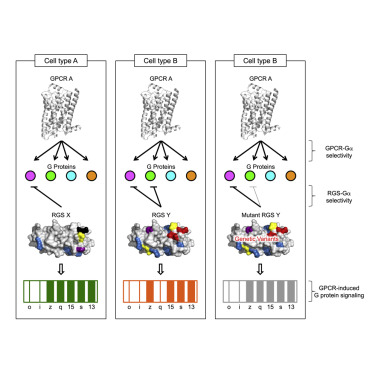 Martemyanov said: “It is clear that genetic variation in the RGS barcode regions has the potential to disrupt normal GPCR signalling, to cause disease or to create more subtle differences or traits… it may help explain why different individuals treated with the same GPCR-targeting drug often differ widely in their responses.”

According to the authors, the RGS barcode regions – and the Gα subunits they regulate – are continuously evolving. The researchers compared the analyses of different species of RGS proteins to create less nuanced, “ancestral” RGS proteins, which enabled them to devise principles for developing novel recombinant RGS proteins that could be used to regulate a desired set of G proteins.

These same principles could be used to guide the development of drugs targeting RGS proteins and treatments that put corrective new RGS proteins in cells might be another avenue for potential therapies, said Martemyanov.

The diversity and ubiquitous nature of GPCRs and their RGS proteins mean that they are implicated in a wide range of pathologies, from neurodegeneration to sexual dysfunction and cancer. However, despite their promise, GPCRs are not necessarily the most attractive drug targets as many are expressed throughout the body, limiting any potential drug’s specificity and increasing the likelihood of off-target effects.

As a result, GPCR-associated proteins may be more fruitful – especially in the case of the RGS proteins, where individual cells employ unique regulators for non-unique GPCRs.

In their study, Martemyanov and colleagues characterised how 20 human RGS proteins recognise and regulate their respective Gα subunits. They established that RGS proteins recognise Gα through a region that has a barcode and that some of the genetic mutations identified in this region were able to disrupt or drive incorrect Gα subunit recognition. Additionally, the natural variation to RGS proteins observed within the population may be causing people to react differently to the same GPCR-targeting drugs, which is potentially a further argument for targeting specific RGS proteins, rather than their upstream receptor.

One response to “Could GPCRs be causing people to respond differently to the same drug?”