News from the Pasteur Institute in France reports on how multi organisational efforts of numerous research institutes enabled the scientific community to gain key insight into the Omicron variant, facilitating a rapid life-saving response. 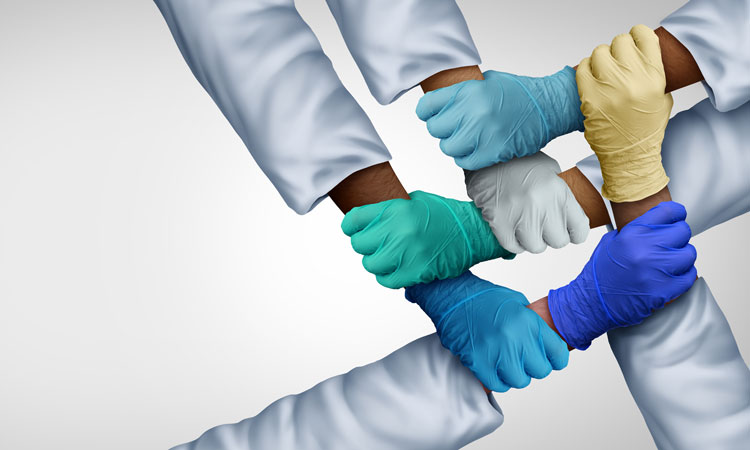 The Omicron variant was detected for the first time in South Africa in November 2021 and has since spread to many countries and become the dominant variant. Initial epidemiological studies show that the Omicron variant is more transmissible than the Delta variant and is capable of spreading to individuals who have received two vaccine doses and to previously infected individuals.

An article in Nature reported that Scientists from the Institut Pasteur and the Vaccine Research Institute, in collaboration with KU Leuven (Leuven, Belgium), Orléans Regional Hospital, Hôpital Européen Georges Pompidou (AP-HP), Inserm and the CNRS, studied the sensitivity of the Omicron variant to monoclonal antibodies used in clinical practice to prevent severe forms of the disease in people at risk, as well as to antibodies in the blood of vaccinated individuals and those previously infected with SARS-CoV-2.

The scientists from KU Leuven isolated the Omicron variant of SARS-CoV-2 from a nasal sample of a 32-year-old woman who developed moderate COVID-19 a few days after returning from Egypt. The isolated virus was immediately sent to scientists at the Institut Pasteur, where therapeutic monoclonal antibodies and serum samples from people who had been vaccinated or previously exposed to SARS-CoV-2 were used to study the sensitivity of the Omicron variant.

Researchers used rapid neutralisation assays, developed by the Institut Pasteur’s Virus and Immunity Unit, on an isolated sample of the Omicron virus. This collaborative multidisciplinary effort also involved the Institut Pasteur’s virologists and specialists in the analysis of viral evolution and protein structure, together with teams from Orléans Regional Hospital and Hôpital Européen Georges Pompidou in Paris.

They compared Omicron’s sensitivity with that of the Delta variant, finding that the Omicron variant is far less sensitive to neutralising antibodies than Delta.
The scientists proceeded to analyse the blood of individuals who had received two doses of the Pfizer or AstraZeneca vaccine. They found that five months after vaccination, their antibodies were no longer capable of neutralising Omicron. This loss of efficacy was also observed in individuals who had been infected with SARS-CoV-2 within the past 12 months.

However, administering a booster dose of the Pfizer vaccine or a single vaccine dose in previously infected individuals led to a significant increase in antibody levels that was sufficient to neutralise Omicron.

Five to 31 times more antibodies were nevertheless required to neutralise Omicron, compared with Delta, in cell culture assays. These results help shed light on the continued efficacy of vaccines in protecting against severe forms of disease.

“We demonstrated that this highly transmissible variant has acquired significant resistance to antibodies. Most of the therapeutic monoclonal antibodies currently available against SARS-CoV-2 are inactive,” commented Olivier Schwartz, co-last author of the study and Head of the Virus and Immunity Unit at the Institut Pasteur.

“We now need to study the length of protection of the booster dose. The vaccines probably become less effective in offering protection against contracting the virus, but they should continue to protect against severe forms,” explained Schwartz.

“This study shows that the Omicron variant hampers the effectiveness of vaccines and monoclonal antibodies, but it also demonstrates the ability of European scientists to work together to identify challenges and potential solutions. While KU Leuven was able to describe the first case of Omicron infection in Europe using the Belgian genome surveillance system, our collaboration with the Institut Pasteur in Paris enabled us to carry out this study in record time. There is still a great deal of work to do, but thanks to the support of the European Union’s Health Emergency Preparedness and Response Authority (HERA), we have clearly now reached a point where scientists from the best centers can work in synergy and move towards a better understanding and more effective management of the pandemic,” commented Emmanuel André, co-last author of the study, a Professor of Medicine at KU Leuven (Katholieke Universiteit Leuven) and Head of the National Reference Laboratory and the genome surveillance network for COVID-19 in Belgium.

The scientists concluded that the many mutations in the spike protein of the Omicron variant enabled it to largely evade the immune response. Ongoing research is being conducted to determine why this variant is more transmissible from one individual to the next and to analyse the long-term effectiveness of a booster dose.

Inhibiting REST gene could be clue to new diabetes treatments