Scientists from Stanford University have been able to halt the growth of multiple myeloma and diffuse large B cell lymphoma in mice with custom molecule sBCMA-Fc V3. 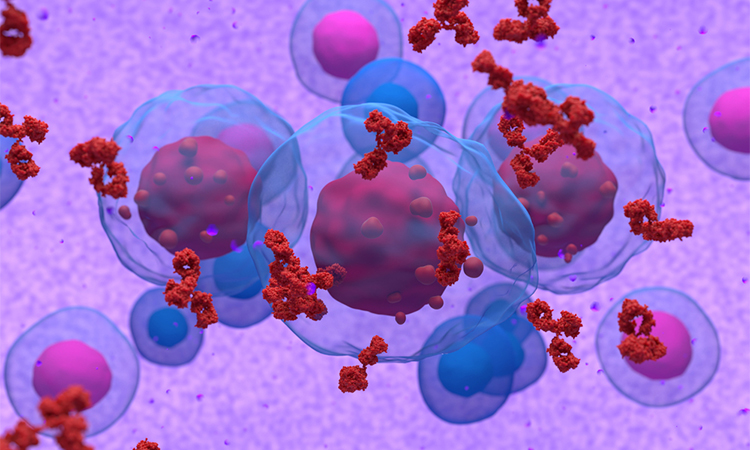 Researchers at Stanford University, US, have developed “decoy receptor” molecules that inhibit the growth of both multiple myeloma (MM) and diffuse large B cell lymphoma (DLBCL) in mice. The molecules were also found to be nontoxic in monkeys, suggesting they could be used to treat humans with either of these deadly diseases, which are two of the most common blood cancers around the world. The study was recently published in Journal of Experimental Medicine.

Both MM and DLBCL are cancers that develop from the body’s antibody-producing B cells. In recent years, the use of genetically engineered CAR T cells to specifically kill cancerous B cells has proved effective in some patients. However, this immunotherapeutic approach often comes with significant side effects and is unsuitable for elderly patients, in whom MM and DLBCL are particularly common.

The researchers suspected that two cell signalling proteins named APRIL and BAFF could be effective therapeutic targets for MM and DLBCL. By binding to several different cell surface receptor proteins, APRIL and BAFF control the development of normal B cells. But elevated levels of APRIL and BAFF promote the growth and survival of malignant B cells, facilitating blood cancer progression and treatment resistance. APRIL is linked to the progression of MM, whereas BAFF is associated with DLBCL.

BCMA is a B cell surface receptor that binds to both APRIL and BAFF. Miao and colleagues investigated whether a soluble version of BCMA, unattached to the B cell surface, would act as a “decoy receptor” to mop up excess APRIL and BAFF and prevent these proteins from driving the growth of cancerous B cells.

The researchers found that soluble BCMA was able to bind to APRIL and inhibit the growth of MM in mice. However, the decoy receptor only bound weakly to BAFF and was therefore unable to reduce the growth of DLBCL.

The team therefore engineered a mutant version of soluble BCMA that binds strongly to both APRIL and BAFF. This molecule, dubbed sBCMA-Fc V3, was able to impede the growth of both MM and DLBCL in rodents.

Notably, sBCMA-Fc V3 also reduced the activity of APRIL and BAFF in cynomolgus monkeys without causing any significant side effects. This suggests that treatment with sBCMA-Fc V3 or similar decoy receptors could be safe and effective in humans.

“Collectively, our data support sBCMA-Fc V3 as a clinically viable candidate for the treatment of MM and DLBCL,” concluded Dr Yu Rebecca Miao. “The biological functions of BAFF and APRIL are not limited to B cell malignancies but extend to autoimmune disorders and other diseases triggered by pathological B cells, suggesting an even broader clinical indication for sBCMA-Fc V3.”