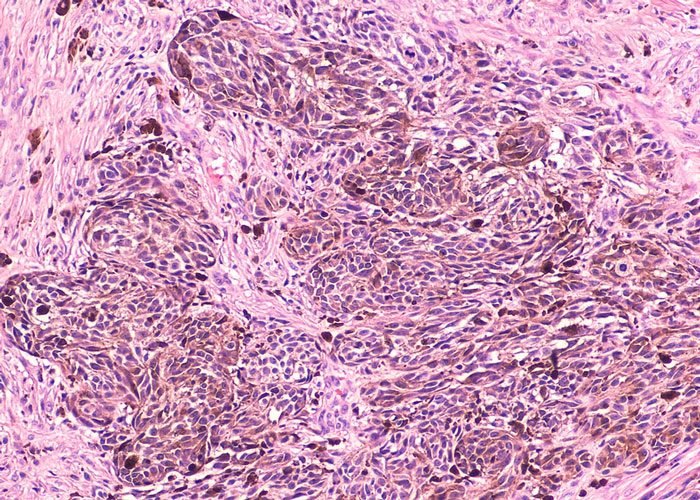 Researchers have revealed a protein active during early embryo development called GDF6 plays a primary role in metastatic melanoma, they also indicate that an increase in the protein correlated with an increase in melanoma growth and spread.

“Melanoma is an aggressive cancer and the most deadly form of skin cancer,” said Dr Craig J. Ceol Assistant Professor of Molecular Medicine at the University of Massachusetts Medical School. “Although new therapies have shown effectiveness against melanoma, a majority of patients either do not respond to these therapies or develop resistance. What is so exciting about this discovery is that it opens up a completely new therapeutic target for investigation. None of the current therapies on the market target GDF6 or its pathway. For patients with very aggressive or treatment-resistant forms of this cancer, this is very important; there is great therapeutic potential when you combine a drug targeting GDF6 with current therapeutics.”

In order to locate GDF6, researchers had to narrow down cancer-causing gene candidates from thousands of “copy number” genetic variations in melanoma cells to just a few hundred, because unlike noncancerous cells, cancer cells have large chromosomal areas where thousands of genes are repeated. Most of these play no actual role in the cancer’s progression. A few, however, do. To separate genes that were important in disease progression from those that aren’t, Researcher Arvind Venkatesan used zebrafish, an animal model that is particularly well-suited to studying melanoma.

The lab compared genes in zebrafish with melanoma to genes in human melanomas and found 374 that were altered in both fish and human cells. Further analysis of DNA, RNA and protein expression revealed GDF6 as a potential genetic driver in melanoma.

GDF6 is a part of a class of proteins that are active during embryo development, called “growth differentiation factors.” These proteins work to help cells divide and differentiate into specific cell types.

By turning off MITF, GDF6 keeps the cells from differentiating

In melanoma cells, the lab discovered that GDF6 worked to turn off two genes, MITF and SOX9. Together, these genes help cells reach maturity and control cell death. When they are turned off, cancer cells are better able to multiply and survive.

“MITF is a master regulator of cell differentiation in melanocytes, which are the cells that form melanin pigment in the skin,” said Dr Ceol. “By turning off MITF, GDF6 keeps the cells from differentiating. Instead of differentiating, the cells keep dividing. Additionally, GDF6 also represses the expression of SOX9, which helps keep these melanoma cells alive.”

Looking at human melanoma cells, Dr Ceol and Venkatesan found that 80 percent of patient tumours had elevated levels of GDF6 and the level of the protein in a tumour correlated to the aggressiveness of the cancer. Patients with less GDF6 had a lower risk of metastasis and a higher chance of survival. “This is important because it means melanoma cells are dependent on GDF6 for survival,” said Venkatesan. “Without GDF6, melanoma cells do not survive.”

The next step for Dr Ceol and colleagues is to find a way to turn off GDF6 that could potentially be used in a clinical setting. “Because GDF6 is a type of protein that acts outside the cell, it makes it much easier to target therapeutically. We’re already exploring how to use monoclonal antibodies to inhibit GDF6,” he said.

The study has been published in the Journal of Clinical Investigation.