By chipping away at a viral protein, Rice University scientists have discovered a path toward virus-like, nanoscale devices that may be able to deliver drugs to cells. 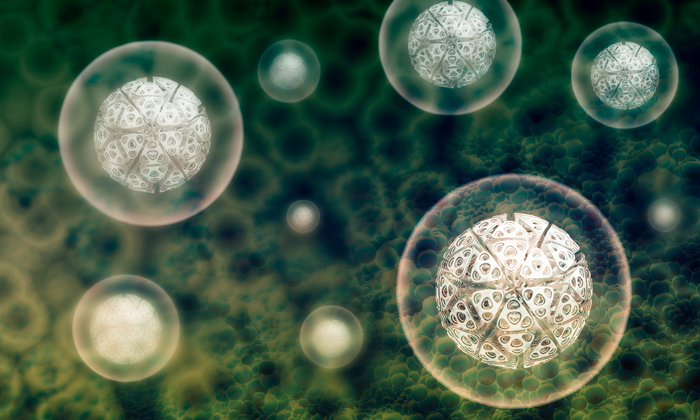 The protein is one of three that make up the protective shell, called the capsid, of natural adeno-associated viruses (AAV). By making progressively smaller versions of the protein, the researchers made capsids with unique abilities and learned a great deal about AAV’s mechanisms.

Rice bioengineer Junghae Suh studies the manipulation of nondisease-causing AAVs to deliver helpful cargoes like chemotherapy drugs. Her research has led to the development of viruses that can be triggered by light or by extracellular proteases associated with certain diseases.

AAVs are small – about 25 nanometers – and contain a single strand of DNA inside tough capsids that consist of a mosaic of proteins known as VP1, VP2 and VP3. AAVs have been used to deliver gene-therapy payloads, but nobody has figured out how AAV capsids physically reconfigure themselves when triggered by external stimuli, Suh said. That was the starting point for her lab.

“This virus has intrinsic peptide (small protein) domains hidden inside the capsid,” commented Suh. “When the virus infects a cell, it senses the low pH and other endosomal factors, and these peptide domains pop out onto the surface of the virus capsid.

“This conformational change, which we termed an ‘activatable peptide display’, is important for the virus because the externalised domains break down the endosomal membrane and allow the virus to escape into the cytoplasm. In addition, nuclear localisation sequences in those domains allow the virus to transit into the nucleus. We believed we could replace that functionality with something else.”

Of the three natural capsid proteins, only VP1 and VP2 can be triggered to expose their functional peptides, but neither can make a capsid on its own. Shorter VP3s can form capsids by themselves, but do not display peptides. In natural AAVs, VP3 proteins outnumber each of their compadres 10-to-1.

That limits the number of peptides that can be exposed, so Suh, Thadani and their co-authors set out to change the ratio. That led them to truncate VP2 and synthesize mosaic capsids with VP3, resulting in successful alteration of the number of exposed peptides. Based on previous research, they inserted a common hexahistidine tag that made it easy to monitor the surface display of the peptide region.

“We wanted to boost the protein’s activable property beyond what occurs in the native virus capsid,” Thadani said. “Rather than displaying just five copies of the peptide per capsid, now we may be able to display 20 or 30 and get more of the bioactivity that we want.”

They then made a truncated VP2 able to form a capsid on its own. “The results were quite surprising, and not obvious to us,” Suh said. “We chopped down that VP2 component enough to form what we call a homomeric capsid, where the entire capsid is made up of just that mutant subunit. That gave us viruses that appear to have peptide ‘brushes’ that are always on the surface.

“A viral structure like that has never been seen in nature,” she said. “We got a particle with this peptide brush, with loose ends everywhere. Now we want to know if we can use these loose ends to attach other things or carry out other functions.”

Homomeric AAVs display as many as 60 peptides, while mosaic AAVs could be programmed to respond to stimuli specific to particular cells or tissues and display a smaller desired number of peptides, the researchers said.

“Viruses have evolved to invade cells very effectively,” Suh said. “We want to use our virus as a nanoparticle platform to deliver protein- or peptide-based therapeutics more efficiently into cells. We want to harness what nature has already created, tweak it a little bit and use it for our purposes.”