In an experiment with pigs, researchers have demonstrated for the first time that the administration of even extremely low doses of an endocrine disruptor – in this case, an endogenous oestrogen – leads to epigenetic changes in a pregnant sow’s DNA. 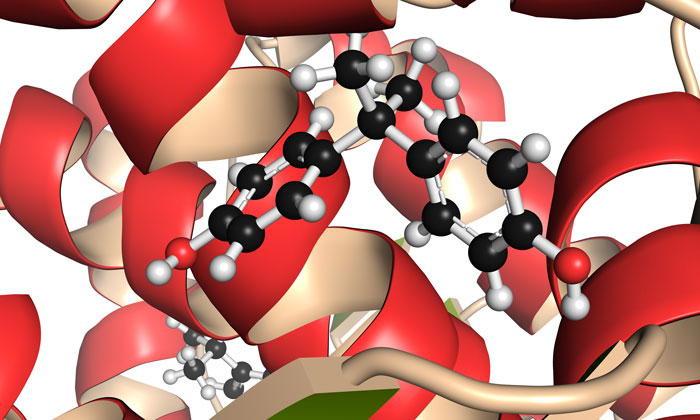 Moreover, these changes were also observed in the sows’ embryos, and similar changes were even evident after the offspring had reached adulthood.

The study, from researchers at ETH Zurich and the Technical University of Munich, is published in the journal Scientific Reports.

A time window of increased sensitivity

“Endocrine disrupting chemicals (EDCs), especially oestrogens, are highly effective even at very low doses,” says Susanne Ulbrich, Full Professor of Animal Physiology at ETH Zurich. Whether endo- or exogenous chemicals have an effect, and how strong that effect is, also depends on the point in time during which the exposure occurs. “For example,” Ulbrich explains, “the body is particularly susceptible to external disruptive hormonal influences during the embryonic phase of early pregnancy.”

Ulbrich and her colleagues examined exactly such a time window in their study with pigs: to simulate the intake of EDCs via drinking water or food, they exposed pregnant sows to varying doses of oestradiol-17β, a natural oestrogen, via their daily feed either over the course of the whole gestation period or only during the first 10 days after fertilisation.

The scientists tested the gene expression and the epigenetic changes in various tissues of the pregnant sows as well as in their offspring, both in the 10 day old embryos (blastocysts) and in one year old mature females.

Their efforts bore fruit: of the 57 oestrogen-related genes, oestradiol affected the tissue-specific expression of about two dozen of the genes tested, according to dosage. Most of these genes regulate the cell cycle or suppress the growth of tumours. The changes were most pronounced in the pregnant sows’ corpora lutea, endometria, hearts and skeletal muscle.

Epigenetic changes occur for example through the addition or removal of small chemical groups, such as methyl groups, at certain points in the DNA. This can alter the expression of the affected gene, and in turn change the cell’s function.

“We didn’t find any serious impact on the health of the adult offspring; we saw only slight changes, such as in bone density and the ratio of fat to muscle mass,” Ulbrich explains. However, it remains unclear what long-term effects the epigenetic changes might have, and whether the interaction of the many EDCs humans are exposed to on a daily basis render the situation more acute.

“There is an urgent need to observe this phenomenon over several generations in a long-term study,” says the ETH professor. “Epigenetic changes can emerge within just one generation, but in certain circumstances they will continue to be transmitted to succeeding generations. We can already clearly demonstrate that hormones, even after a brief exposure period and in very small amounts, can have a measurable effect,” she concludes.

Based on these results, Ulbrich, an expert in reproductive physiology, is calling for a re-assessment of the acceptable daily intake value and the “no observed effect level” dosage. She notes that pigs’ hormonal changes during pregnancy closely resemble those in humans, so the results of the study are highly applicable to humans; they may even be more appropriate than findings from a study of, say, mice.

“At the moment, recommended threshold levels are probably too high,” Ulbrich says. No matter how tiny the oestrogen dosage, the epigenetic changes she and her team observed clearly evidenced that the test subjects had been exposed to an EDC. She continues: “How exactly that resulted in the changes and what impact these changes will have in the long run requires closer study. The sensitivity of embryos in the early days of pregnancy should under no circumstances be underestimated.”