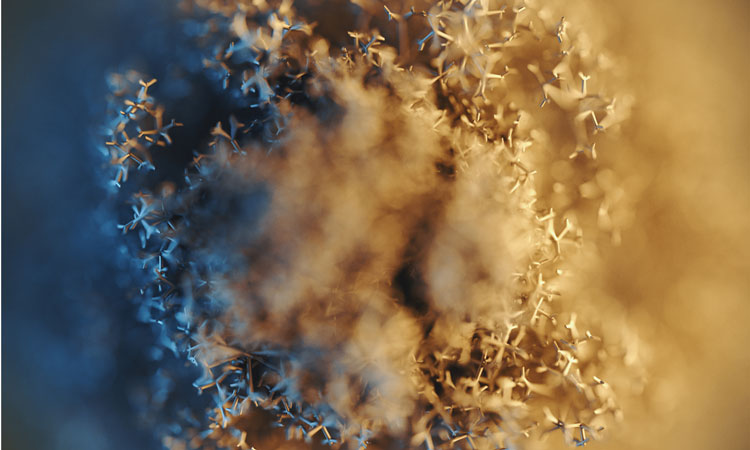 A ‘drug sponge’ could be used in future to soak up excess drugs in the hope that it would prevent debilitating and dangerous side effects of toxic treatments. It could even deliver higher doses to tumours that do not respond to more benign treatments.

The “drug sponge” is an absorbent polymer coating a cylinder that is 3D printed to fit precisely in a vein that carries the blood flowing out of the target organ – the liver in liver cancer, for example. There, it would absorb up any drug not absorbed by the tumour, preventing it from reaching and potentially poisoning other organs.

In early tests in pigs, the polymer-coated drug absorber took up, on average, 64 percent of a liver cancer drug – the chemotherapy agent doxorubicin – injected upstream.

“Surgeons snake a wire into the bloodstream and place the sponge like a stent, and just leave it in for the amount of time you give chemotherapy, perhaps a few hours,” said Dr Nitash Balsara, a Professor of Chemical and Biomolecular Engineering at the University of California, Berkeley, and a faculty scientist at Lawrence Berkeley National Laboratory.

“Because it is a temporary device, there is a lower bar in terms of approval by the FDA,” said Professor Steven Hetts, an interventional radiologist at UC San Francisco who first approached Prof Balsara in search of a way to remove drugs from the bloodstream. “I think this type of chemofilter is one of the shortest pathways to patients.”

Most anticancer drugs are poisonous, so doctors walk a delicate line when administering chemotherapy. A dose must be sufficient to kill or stop the growth of cancer cells, but not high enough to irreparably damage the patient’s other organs. Even so, chemotherapy is typically accompanied by major side effects, including nausea, vomiting, diarrhea and suppression of the immune system, not to mention hair loss and ulcers.

“We are developing this around liver cancer because it is a big public health threat – there are tens of thousands of new cases every year – and we already treat liver cancer using intra-arterial chemotherapy,” Prof Hetts said. “But if you think about it, you could use this sort of approach for any tumour or any disease that is confined to an organ, and you want to absorb the drug on the venous side before it can distribute and cause side effects elsewhere in the body. Ultimately we would like to use this technology in other organs to treat kidney tumours and brain tumours.”

Prof Hetts, the chief of interventional neuroradiology at the UCSF Mission Bay Hospitals, treats tumours of the eye and brain by threading catheters through the bloodstream to deliver chemotherapy drugs directly to the site of the tumour. This delivers the maximum dose to the tumour and the least dose to the rest of the body, minimising side effects. It is a vast improvement over injecting chemotherapy drugs straight into the bloodstream, which allows the drugs to reach and poison every part of the body and gambles on the tumour succumbing before the patient. Nevertheless, typically more than half of the dose injected into the body escapes the target organ.

Several years ago, he started thinking about a major improvement: filtering the blood coming out of the targeted organ to remove excess chemo so that much less of the drug reaches the body as a whole.

Prof Balsara, a chemical engineer who specialises in ionic polymers for batteries and fuel cells, is one of the people Prof Hetts approached to find a suitable absorber to put in the bloodstream. In 2016, former UC Berkeley and Berkeley Lab postdoctoral fellow Chelea Chen identified an ionic polymer, not unlike polymers used in fuel cells, that efficiently absorbed doxorubicin,

“An absorber is a standard chemical engineering concept,” Prof Balsara said. “Absorbers are used in petroleum refining to remove unwanted chemicals such as sulfur. Literally, we’ve taken the concept out of petroleum refining and applied it to chemotherapy.”

That polymer led Prof Balsara’s team to a commercial version of the absorbent polymer that was easier to obtain in large quantities, and Berkeley postdoc Hee Jeung Oh spent more than a year perfecting a way to adhere the polymer to a 3D-printed cylinder with crisscrossing struts that could be placed inside a person’s vein.

“Fitting the cylinder in the vein is important; if the fit is poor, then the blood with the dissolved drug will flow past the cylinder without interacting with the absorbent,” Prof Balsara said. Recognising the need for customising the device for individual patients, Prof Balsara solicited the help of a long-time collaborator, Joseph DeSimone, the CEO of Carbon, Inc., a 3D-printing company in Redwood City.

In the experiments Prof Hetts implanted the 3D-printed device into the vein of a pig and measured how much of the doxorubicin injected upstream remained downstream of the absorber. In a healthy pig, about 64 percent of the drug was removed.

They are currently in the midst of experiments to determine how much drug is absorbed when the device is implemented at the exit of a healthy pig liver, though the true test will be in humans, perhaps in a couple of years, Prof Hetts said.

“This is a first level in vivo validation that yes, this device will bind up drug in the bloodstream,” he said. “But extensive animal testing is not the next path; the next path is getting conditional approval from FDA to do first-in-human studies, because it is much more realistic to test these in people who have cancer as opposed to continuing to test in young pigs who have otherwise healthy livers.”

Prof Hetts says that the technique is superior to another liver cancer treatment now undergoing testing, which requires major endovascular surgery to completely block the outputs from the liver with balloons and divert the outflowing blood to an external dialysis machine, where the drug is removed and the blood returned to the body.

“There is a lot of opportunity to develop less-invasive devices that will bind up the drug in a gentler manner,” he said.

Drug sponges could be applied to many types of tumours and chemotherapy drugs, Prof Hetts said, and could potentially be used to sop up other dangerous drugs, such as high-powered antibiotics that are toxic to the kidneys but required to kill a pathogen.

“We think this is a generally applicable concept,” he said.

Prof Hetts, Prof Balsara and their colleagues at UC Berkeley, UCSF and the University of North Carolina, Chapel Hill, published their results in the journal ACS Central Science.