New protein function could be key to treatment of drug addiction

Scientists have revealed new findings about the neural circuit involved in the reward stimulus, which plays a major role in drug dependence and psychological disorders. 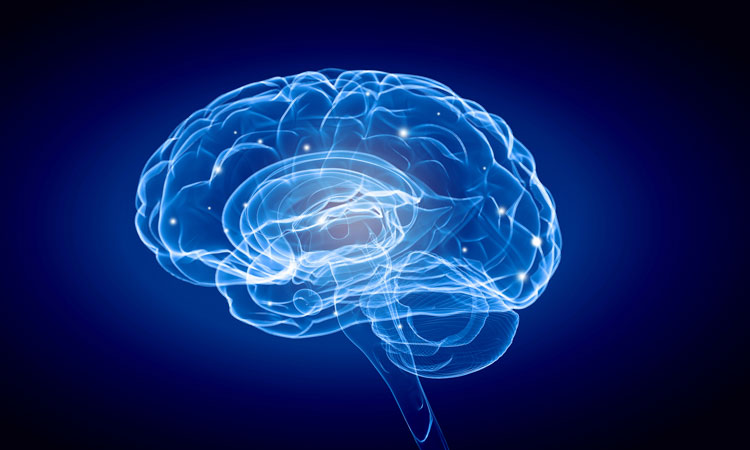 A team of scientists has identified a novel protein function involved in the reward circuit of the brain which could be used in the development of therapies for drug addiction.

The study, led by Prof Kozo Kaibuchi and Dr Yasuhiro Funahashi from Nagoya University, Japan, was based on the fact that dopamine, when released in the brain, activates several proteins in response and these proteins then cause certain changes in brain activity, such as reward-related gene expression and changes in nerve transmission or plasticity. But, how these changes happen at the molecular level was not well understood.

What was known was that dopamine activates multifunctional proteins, such as CREB-binding protein (CBP), which in turn promotes gene expression through interactions with other proteins. The scientists searched for proteins interacting with CBP in mice that experienced a conditioned reward. Of these, one protein, called Npas4, a ‘transcription factor’ (a protein that binds to specific DNA sequences and regulates transcription from DNA to mRNA), was known to function in reward-related learning.

To find out Npas4’s mechanism the scientists showed that a protein kinase called MAPK adds a phosphate group to Npas4 (a well-known intracellular process called phosphorylation, which ‘activates’ proteins to carry out their functions), thereby facilitating its interaction with CBP. The scientists also identified the exact sites where MAPK phosphorylates Npas4. Moreover, they found that dopamine activates Npas4 in striatal medium spiny neurons and so promotes the expression of genes related to ‘neural plasticity’ (changes in neural connections).

Thus, the three dopamine-stimulated proteins CBP, MAPK, and Npas4 interact with each other, leading to profound neural changes. 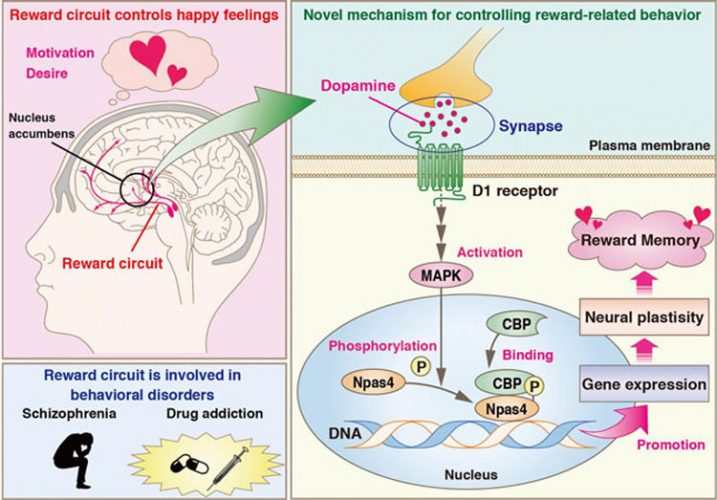 Novel mechanism for regulating the reward behavior can potentially be explored for new treatments of Schizophrenia & other addiction-based disorders (credit: Kozo Kaibuchi and Yasuhiro Funahashi).

To investigate the function of Npas4 in reward-related behaviour, the scientists inactivated the Npas4 protein in the reward circuit neurons of mice. These mice and normal mice learned to expect a cocaine reward in only one of two chambers, after which chamber preference was measured. Compared to normal mice, the Npas4-deficient mice showed a 50 percent reduction in drug-seeking behaviour, indicating a significant reduction in reward memory.

Importantly, the drug-seeking behaviour was restored after exogenous administration of the Npas4 protein but not by phospho-deficient mutants of Npas4. This confirmed that Npas4 and its phosphorylation play an important role in reward-related behaviour.

These findings shed light on the pathways involved in the reward circuit of the brain. Faulty functioning of the reward circuit is seen in various neuropsychological and cognitive disorders. By explaining in detail, the function and reward-associated mechanism of Npas4, the scientists have paved the way for new, effective therapies.

“Our study can help develop treatments for neuropsychiatric disorders such as schizophrenia. It can also be useful in tackling addiction to or dependence on cocaine and other stimulants,” said Prof Kaibuchi.