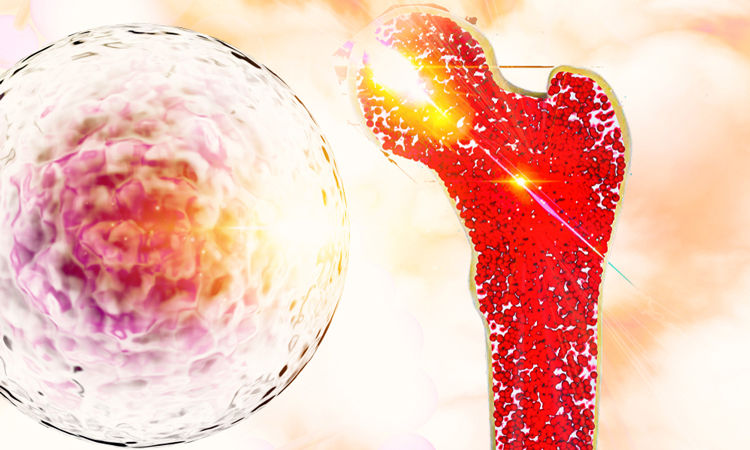 Molecular motors have been used by Dutch researchers to manipulate the protein matrix on which bone marrow-derived mesenchymal stem cells are grown. The team say that their findings could be used in the development of tissue engineering. The study was conducted at the University of Groningen and the University Medical Center Groningen.

According to the scientists, the rotating motors altered the protein structure which results in a bias of the stem cells to differentiate into bone cells. Without rotation, the stem cells tended to remain multipotent.

“Cells are sensitive to the structure of the surface that they attach to,” explained Patrick van Rijn, associate professor in materiobiology and nanobiomaterials. “And movement is an important driver in biology, especially continuous movement.”

The growing possibilities for stem cells in pharma…

This was the reasoning behind the researchers’ decision to use molecular motors to manipulate the protein matrix on which stem cells are grown.

The motors were linked to a glass surface, which was subsequently coated with protein and either exposed to UV irradiation to power the motors or not exposed to it at all. After about an hour, the motor movement was stopped and cells were moved onto the protein layer and left to attach. Finally, differentiation factors were added.

The importance of movement

These experiments showed that cells grown on protein that was submitted to the rotary motion of the molecular motors tended to specialise into bone cells more often, while cells seeded on protein that was not disturbed were more inclined to maintain their stem-cell properties.

Observations of the protein layer using atomic force microscopy and simulations of the interaction between the motor molecules and proteins revealed that the movement induced subtle structural changes in the protein matrix. 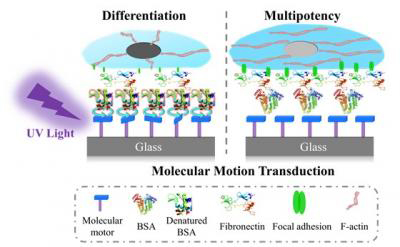 The movement of motor molecules interferes with the alpha-helices in the proteins, which causes structural changes. The change in the structure of the protein affects how the cells attach. This sets off a signaling cascade that eventually leads to altered behaviour, such as the differentiation into bone cells. Thus, molecular movement leads to nanoscopic changes in surface structure, which in turn leads to differences in cell attachment, cell morphology and eventually, cell differentiation (credit: Zhou et al, University of Groningen).

“The movement of motor molecules interferes with the alpha-helices in the proteins, which causes structural changes,” said Van Rijn.

The researchers explained that the change in the surface structure of the adhered protein affects how the cells attach. This triggers a signalling cascade that eventually leads to altered behaviour, such as the differentiation into bone cells. Thus, molecular movement leads to nanoscopic changes in surface structure, which in turn leads to differences in cell attachment, cell morphology and eventually, cell differentiation.

“Changing the properties of a surface to affect cell fate has been used before,” says Van Rijn. However, this was done primarily with switches, so there was only a change from one state to another. “In our study, we had continuous movement, which is much more in line with the continuous motion found in biological transport and communication systems. The fact that the motors are driven by light is important… Light can be carefully controlled in space and time. This would allow us to create complex geometries in the growth matrix, which then result in different properties for the cells.”

The team concluded that light-controlled molecular motors could be a useful tool in tissue engineering.

Under the microscope: Exploring phage display technologies for drug discovery and early development