Nanoparticles could be an alternative to antibody immunotherapies

A study has shown that inexpensive nanoparticles can effectively inhibit PD-L1 in cancer cells in the lab and work as well as antibodies, providing a potential alternative immunotherapy. 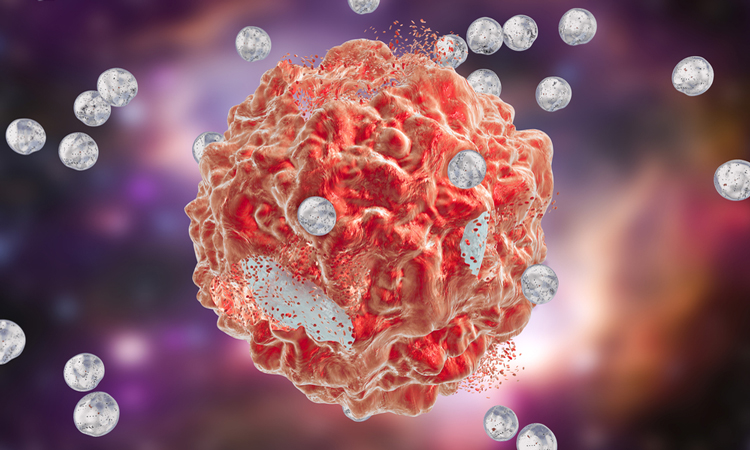 A group of American researchers has developed nanoparticles that can activate immune responses to cancer cells in the lab. According to the scientists, if the nanoparticles work as well in the body as in the lab, they could provide an effective and more affordable way to fight cancer.

Led by a team at the University of Wisconsin-Madison (UW-Madison), the study demonstrated that the nanoparticles are cheaper to produce and easier to engineer than the antibodies which underlie current immunotherapies.

“The antibodies that are used right now are large, they’re expensive, they’re hard to engineer and they don’t always show the highest level of efficacy either. So, we wanted to explore other ways to activate the immune system,” says Seungpyo Hong, a professor in the UW-Madison School of Pharmacy.

In tests against lab-grown strains of cancer, the researchers found that the nanoparticles boosted production of the immune stimulating protein interleukin-2 by T cells by about 50 percent, compared to no treatment; they were just as effective as antibodies. The nanoparticles were also able to improve the effectiveness of the chemotherapy drug doxorubicin in similar tests.

The PD-1 protein is produced by T cells and acts as an ‘off switch’ for immune responses, which helps to prevent T cells from improperly attacking healthy cells.

Some cancer cells hide from the immune system by imitating healthy cells. They produce proteins called PD-L1, which bind to the off switch and enable tumours to avoid detection. Several immunotherapies use antibodies against either PD-1 or PD-L1 to disrupt this connection.

“The key here is if you block that binding very efficiently, you can now reactivate the T cells, so the T cells start attacking the tumour cells,” says Hong.

The nanoparticles the researchers developed inhibit PD-L1 on cancer cells, so they do not activate the off switch on T cells. Although Hong’s lab used a different approach to antibodies, they achieved the same effect. 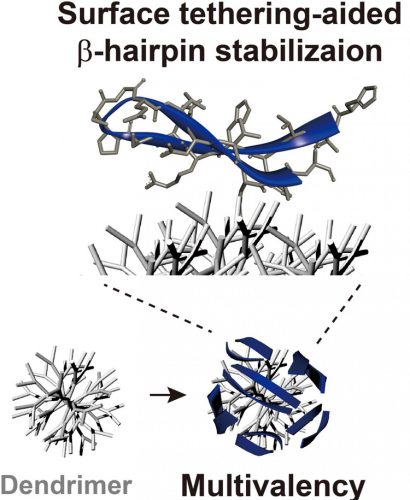 The nanoparticles were made of sections of the T cell protein PD-1 (in blue) attached to a branched core called a dendrimer (in grey). The branches in the core of the nanoparticle allowed many chunks of the PD-1 protein to bind to the nanoparticle, increasing its effectiveness (credit: Seungpyo Hong).

Taking small chunks, or peptides, of the PD-1 protein, the team attached them to branched nanoparticles. The nanoparticles stabilise these peptides so they bind to PD-L1 on cancer cells much like the full PD-1 protein can. They also have a lot of branches, so they can hold many copies of the PD-1 peptides and bind more strongly to PD-L1.

Both the peptides and the nanoparticles they are attached to are simple and cheap to produce in the lab. Furthermore, both can easily be altered, so the researchers say that future research might be able to optimise the technology by following this early proof-of-concept study.

“The bottom line is that, for the first time, we developed this peptide-nanoparticle platform for immunotherapy and found clear evidence that this system has great potential,” says Hong. “We’re looking forward to the next step.”

According to the researchers, this is the first demonstration that nanoparticles can act as immunotherapy agents. Although more research is needed to understand their effectiveness in the body, Hong has applied for a patent on the new technology and is now testing the nanoparticles in animal models.