A study has shown that targeting the proteins mtp53 and PARP in triple negative breast cancer could inhibit tumour growth and provide a new treatment option. 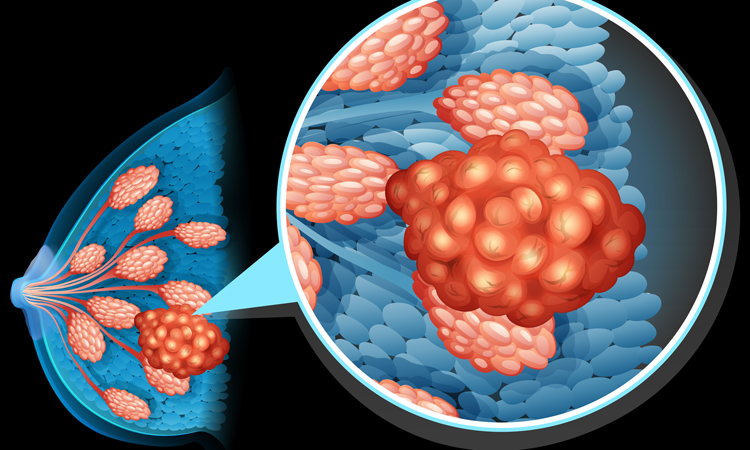 Researchers have revealed a potential new targeted treatment for triple negative breast cancer. According to the team, their findings regarding an interaction between the mtp53 and PARP proteins during DNA replication which appear to drive the growth of malignant cells, could improve therapeutic options.

The research, conducted at The Graduate Center, CUNY and Hunter College in collaboration with other American scientists, shows that in the vast majority of patients with the condition, mutant mtp53 and PARP proteins are present.

“Our new findings suggest that the presence of both mtp53 and PARP could serve as a good identifier of breast cancers that would respond to combined treatment with talazoparib – a PARP inhibitor that was developed to treat breast cancers with the BRCA mutation – and temozolomide – a chemotherapy agent that is used to treat some brain cancers,” said Professor Jill Bargonetti, whose lab conducted the research. “This is an exciting finding because it could lead to the first targeted therapy for triple negative breast cancer, enabling more precise and effective treatment of a very aggressive form of the disease.”

Investigating a variety of breast cancer cell lines, patient-derived xenographs, tissue microarray samples and data from the Cancer Genome Atlas, the researchers discovered that high levels of these proteins are present on replicating DNA in triple negative breast cancer tumours. They suggested that these levels drive tumour growth.

A review of the therapeutic mechanism of existing cancer drugs led the research team to identify talazoparib and temozolomide as existing drugs that could potentially be combined to create a targeted therapy which could effectively suppress the growth of triple negative breast cancer tumours.

The illustrations show how co-ordination of the proteins mtp53 R273H, PARP, and MCM2-7 on replicating DNA likely play a role in tumour development for some breast cancers. In figure A, MCM2-7 (shown in purple), mtp53 R273H (shown in green), and PARP (shown in red) interact with replicating DNA. When cell damage occurs, they help facilitate aberrant repair, allowing cells to survive and promoting tumour development. In figure B, high PARP and mtp53-expressing cells are treated with talazoparib (shown in yellow) in combination with temozolomide, which allows PARP to be trapped on replicating chromatin. This increases disrepair of DNA damage, promoting cell death and preventing tumour development (credit: Gu Xiao).

“Our findings that mutant p53 and PARP participate in the DNA replication pathway will provide mechanism-derived dual biomarkers that aid in the diagnosis and treatment of these therapeutically elusive subsets of breast cancer,” said Gu Xiao, a research associate with Bargonetti’s lab and the paper’s first author.

The team said their next step is to test whether the combined drugs successfully block replication of triple negative breast cancer cells in tumour samples in animal models. If the therapy ultimately proves successful, it could lead to the reclassification of the disease to a category of cancers called mutant p53/PARP1 positive cancers, which are treatable by combination PARP inhibitor therapies.