Astrocytes could be harnessed to protect motor neurons in MND 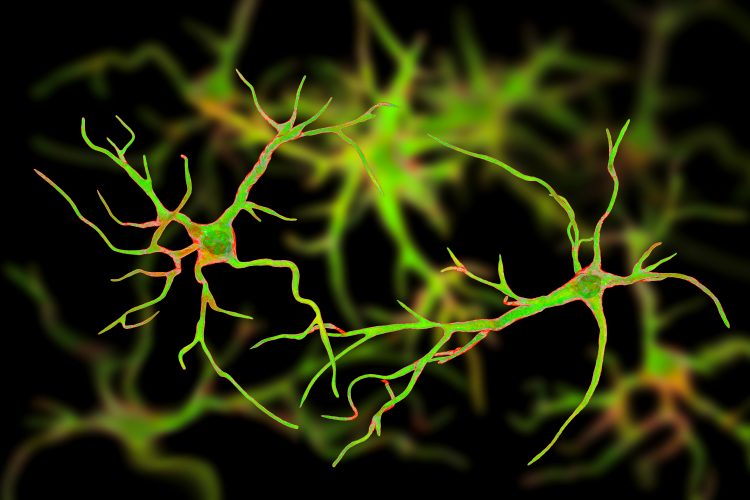 Researchers have discovered that astrocytes can protect motor neurons in the central nervous system (CNS) from the toxicity of misfolded protein, TDP-43, in sporadic motor neuron disease (MND). The team suggest this ‘rescue mechanism’ could be harnessed to slow disease progression, particularly in amyotrophic lateral sclerosis (ALS).

The study, published in Brain, demonstrated that this neurodegenerative disease is caused by accumulation of TDP-43 in motor neurons, resulting in cell death. However, the scientists noted that TDP-43 accumulation in neural support cells, called astrocytes, does not cause death. Instead they appear “comparatively resistant”.

According to the paper, when the two cell types are together, astrocytes protect motor neurons from the protein aggregates, promoting their survival. The researchers from the Francis Crick Institute and University College London, both UK, suggest that these cells may therefore be supporting motor neurons early on in sporadic MND. They called this a ‘rescue mechanism’.

…when the two cell types are together, astrocytes protect motor neurons from the protein aggregates, promoting their survival”

“The role astrocytes have played in dealing with toxic forms of TDP-43 in motor neurons has not been previously well documented in motor neuron disease. It’s exciting that we’ve now found that they may play an important protective role in the early-stages of this disease,” explains Phillip Smethurst, lead author and former postdoc in the Human Stem Cells and Neurodegeneration Laboratory at the Crick. “This has huge therapeutic potential – finding ways to harness the protective properties of astrocytes could pave the way to new treatments. This could prolong their rescue function or find a way to mimic their behaviour in motor neurons so that they can protect themselves from the toxic protein.”

A new model for MND

In order to conduct this research, the team created a new model for MND, which more closely resembles the disease in patients. In the model they took healthy adult stem cells and exposed them to the toxic TPD-43 protein using post-mortem spinal cord tissue samples donated by patients with MND.

“For the first time, we have been able to create a model of sporadic motor neuron disease by essentially ‘transferring’ the toxic TDP-43 protein from post-mortem tissue into healthy human stem cell-derived motor neurons and astrocytes in order to understand how each cell type responds to this insult, both in isolation and when mixed together,” said Dr Rickie Patani, co-senior author, group leader of the Human Stem Cells and Neurodegeneration Laboratory at the Crick and Professor of Human Stem Cells and Regenerative Neurology at UCL Queen Square Institute of Neurology.