Researchers have revealed that the WDR74 protein plays a key role in lung cancer and melanoma, including metastasis, indicating it may be a potential drug target. 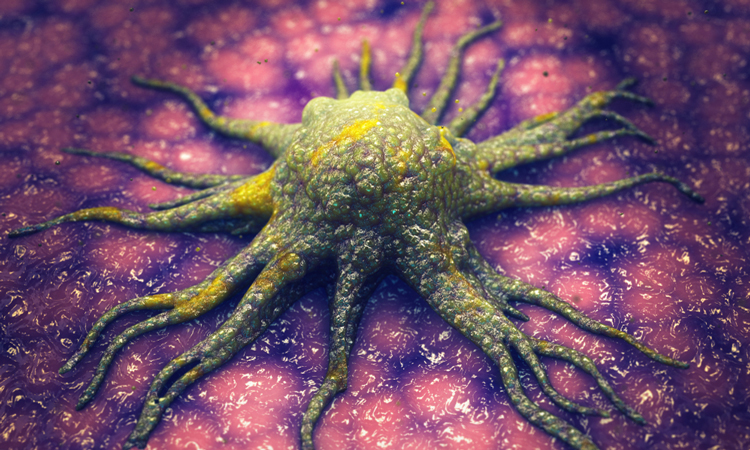 Researchers have identified the WDR74 protein as key in the progression of lung cancer and melanoma primary tumour and metastases progression. Mice with artificially increased levels of the protein demonstrated high activity in cancer cells, leading the scientists to conclude WDR74 is a drug target for the advancement of these conditions.

The study was conducted by an international group of researchers at the Far Eastern Federal University (FEFU), Russia, the University of Geneva, Switzerland, Minjiang University and Fuzhou University, both China.

WDR74 indirectly affects the expression of a number of other proteins, including p53″

Investigating which circulating tumour cells give rise to metastases, Chinese scientists from the laboratory of Dr Lee Jia at Fuzhou University undertook a proteomic analysis and analysed the tumour cells. They discovered proteins which were highly expressed in active metastatic cells and lost in passive ones.

“Within this discovery, two of our scientific publications were being built, one devoted to lung cancer and the other to melanoma. To test the oncogenic activity of WDR74 in circulating tumour cells of lung cancer and melanoma, we ‘turned off’ this protein by the method of gene correction CRISPR-Cas9 and interfering RNAs to remove/reduce the amount of protein. After that, we monitored what happens to the cells in the context of their proliferation, colony formation, cell cycle, ability to migrate and grasp in body tissues. We have also conducted the opposite experiment increasing the amount of WDR74 protein in cancer cells. Both types of experiment confirmed that WDR74 plays a crucial role in the progression of the tumour and its metastases. Protein absence decreases and the presence increases the oncogenic properties of circulating tumour cells. In vivo this confirmed during the experiments conducted on mice,” said Professor Vladimir Katanaev, one of the research authors, Head of the Laboratory of Pharmacology of Natural Compounds, Department of Pharmacology and Pharmacy of the FEFU School of Biomedicine.

The group explained that WDR74 has at least two mechanisms of action, as in different tumors it has different priorities. In lung cancer cells, the protein primarily regulates WNT signaling pathways, which are active in tumour cells and passive in healthy cells of the body. In melanoma, WDR74 indirectly affects the expression of a number of other proteins, including p53.

WDR74 manages the production of ribosomal protein RLP5, which has additional, extraribosomal properties; RLP5 controls the MDM2 protein ligase and MDM2, in turn, leads to the degradation of the p53 protein. The question of which mechanism is responsible for the expression of WDR74 itself remains unsolved.

According to the researchers, the published studies open up new paths to the development of effective curing methods for the metastases of these two cancer types with targeted drugs. Such therapies should hit specific protein targets in the circulating tumour cells. The next stage of work for the scientists is to develop a drug with this mechanism.

The paper were published in Cancer Letters and Oncogene.