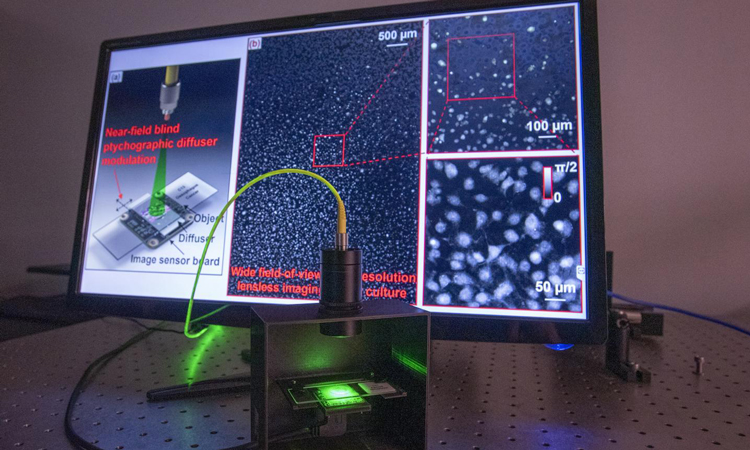 A new label-free microscopy platform has been developed by researchers that removes objective lenses – a central component of traditional microscopes. According to the scientists, from the University of Connecticut (UConn), US, this alteration provides a fuller picture than conventional optical microscopy for the study of diseases.

Most optical microscopes have a limited field of view, only one to two millimeters. The researchers say this is a major inconvenience for life scientists and pathologists who rely on microscopy to analyse diseases since prepared tissue samples have dimensions in the centimetre range.

Rather than using lenses to magnify the tissue sample, the platform relies on a diffuser that goes between the specimen and the image sensor or camera. The diffuser randomly moves to different positions while the sensor acquires the images, gathering the encoded object information that will later be used to recover an image for viewing by clinicians or researchers.

This approach cuts down on processing time, cost and allows for a more complete image to be produced”

At the core of the object recovery process is a microscopy imaging technique called ptychography. Ptychographic imaging typically uses a focused beam to illuminate a sample and record the pattern created by the diffracted light. To recover an entire complex image like a tissue sample for viewing, ptychography requires thousands of patterns to be recorded while scanning the sample to different positions.

“Although ptychography has been of increasing interest to scientists around the world, broad implementation of the method has been hampered by its slow speed and the requirement of precise mechanical scanning,” says Shaowei Jiang, a UConn graduate student and the lead author of the study.

The new ptychographic technology addresses these issues by bringing the sample close to the image sensor. This new configuration allows the team to have the entire image sensor area as the imaging field of view. In addition, it no longer requires the precise mechanical scanning needed for traditional ptychography. This is because the new configuration has the highest Fresnel number ever tested for ptychography, approximately 50,000. The Fresnel number characterises how a light wave travels over a distance after passing through an opening, such as a pinhole. The ultra-high number used in the researchers’ experiments indicates that there is very little light diffraction from the object plane to the sensor plane. Low levels of diffraction mean that the motion of the diffuser can be directly tracked from the captured raw images, eliminating the need for a precise motion stage, which is critical for conventional ptychography.

“This approach cuts down on processing time, cost and allows for a more complete image to be produced of the sample,” said lead researcher Guoan Zheng, a UConn professor of biomedical engineering.

The new prototype offers a 30mm2 field of view, compared to the standard ~2 mm2. By using a full-frame image sensor in a regular photography camera, the technology allows physicians to analyse two entire slides at once.

“Imagine being able to read a whole book at once instead of just a page at a time. That’s essentially what we hope our technology will allow clinicians to do… By using our lensless, turn-key imaging system, we can bypass the physical limitations of optics and acquire high-resolution quantitative information for on-chip microscopy. We’re excited to continue to refine this technology,” Zheng concluded.

The research was published in Lab on a Chip.