A team has discovered channels that enable the transport of lipids between the malaria parasite and red blood cells during infection. 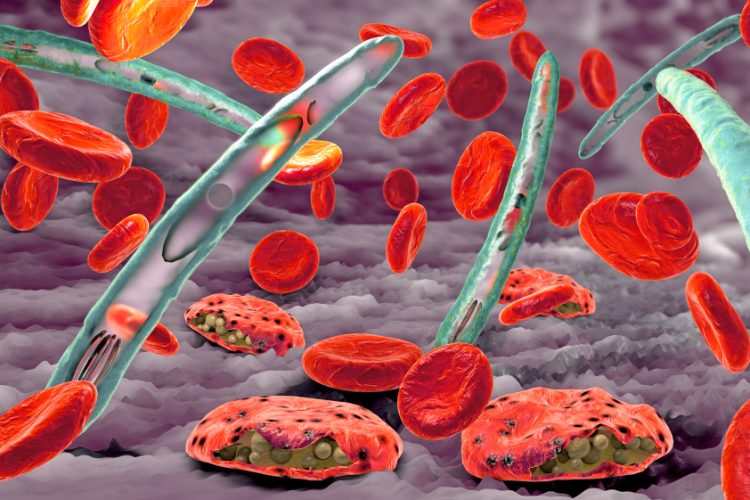 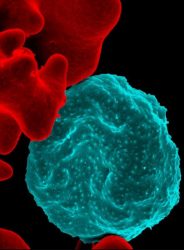 Colourised scanning electron micrograph of red blood cell infected with malaria parasites, which are colourised in blue. The infected cell is in the centre of the image area. To the left are uninfected cells with a smooth red surface [credit: NIAID].

A group of researchers at the US National Institutes of Health (NIH) and other institutions have discovered a set of pore-like holes, or channels, traversing the membrane-bound sac that encloses the deadliest malaria parasite as it infects red blood cells. These channels enable the transport of lipids between the blood cell and parasite, Plasmodium falciparum. The parasite draws lipids from the cell to sustain its growth and may also secrete other types of lipids to hijack cell functions that meet its needs.

According to the team, their finding follows an earlier discovery of another set of channels through the membrane, which enables the two-way flow of proteins and non-fatty nutrients between the parasite and red blood cells. Together, these discoveries raise the possibility of treatments that block the flow of nutrients to starve the parasite, say the researchers.

In the current study, researchers determined that the channels through the sac, or vacuole, that encloses the parasite are made of Niemann-Pick C1-related protein (PfNCR1). The PfNCR1 channels are restricted to locations where the vacuole membrane touches the membrane of the parasite.

The channels the team discovered in the previous study are formed by exported protein 2 (EXP2). Areas of the vacuole membrane containing EXP2 are located far from the parasite’s membrane, at an average distance of 20 to 40 nanometers. The researchers therefore believe that the parasite may use this variation in distance to separate the two transport systems.