Finding order in the chaos of cancer mutations

Scientists observed that different cancers undergo the same genetic mutations at similar stages of evolution, the findings could become part of an ‘evolutionary rule book’ which would theoretically enable the prediction and prevention of cancer’s next evolutionary move. 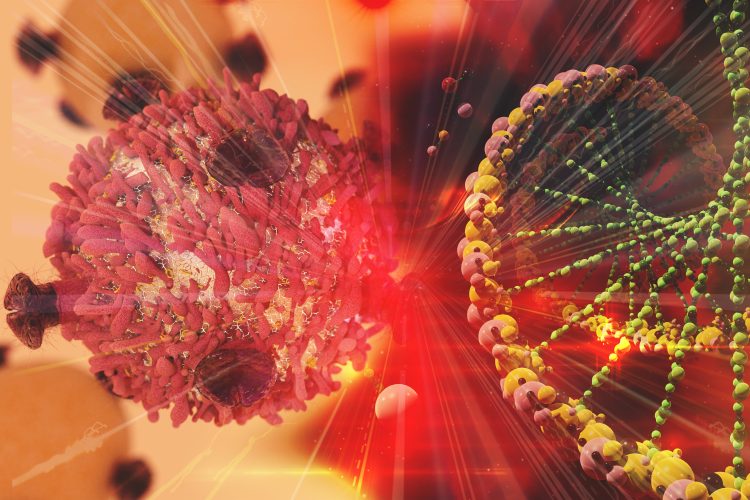 Researchers have identified that there is an element of order to the seemingly chaotic changes to chromosomes that give tumours their heterogeneity. In their paper, the team report that mutations in the chromosomes of cancer cells happen frequently and throughout the development of a tumour; however, some are more likely to occur in the early stages of cancer development and others in the later stages, once a tumour has metastasised.

One of the difficulties in treating cancers is that the genetic make-up of tumours evolves over time. Scientists believe these changes result from errors made in DNA replication, which are more frequent in cancers due to the upregulation of various cell survival pathways and the speed with which cancer cells divide. Unfortunately, the more heterogeneous a tumour is (in other words, the greater the genetic variability of cells within a single tumour), the less likely a patient is to respond successfully to treatment, which ultimately makes recovery less likely and survival shorter.

In their paper published in Nature, researchers at the Francis Crick Institute (the Crick) and the University College London (UCL) Cancer Institute, both UK, sought to identify why these mutations occur and if there is a pattern or order to them.

In collaboration with Germany’s Max Delbrück Center for Molecular Medicine, the team developed a technique that analyses multiple samples from a single tumour and used it to identify chromosomal changes in 1421 tumour samples taken from 394 patients with 22 different types of tumours.

They observed that often similar chromosomal changes had taken place in different subclones within a tumour from the same patient. Subclones are different groups of cells within a single tumour. The team found evidence of subclones evolving in parallel in samples taken from 37 percent of patients (146 patients).

The scientists also identified certain chromosomal changes that occurred in multiple tumour types at particular stages of cancer evolution, including changes that could aid in immune evasion or promote tumour growth despite a lack of oxygen.

Thomas Watkins, lead author and PhD student in the Cancer Evolution and Genome Instability Laboratory at the Crick, said: “In a tumour there are lots of genetic changes taking place. The fact we saw similar chromosomal changes take hold independently within a tumour in separate subclones suggests these changes are important for the tumour and might lead to subclones with them ‘out-competing’ other subclones without them.”

Professor Charles Swanton, senior group leader at the Crick and UCL, Cancer Research UK’s chief clinician and consultant oncologist at UCL Hospital, added: “The presence of common changes supports the theory that there are a number of genetic pathways through which tumours must evolve. Identifying these would move us a step closer to writing cancer’s evolutionary rule book.”

The study’s authors also revealed that some changes were common in the early stages of a cancer’s development, while others were more frequent later on, after it metastasised. They added that there were certain events that acted as a catalyst for mutations; for example, whole genome doubling – where every chromosome is duplicated – appears to open up new evolutionary solutions for the tumour, leading to a wave of late-stage mutations.

Nicholas McGranahan, group leader of the Cancer Genome Evolution Group at the UCL Cancer Institute, commented: “There was a sense of order in the mutations we identified, with different mutations likely to appear at different points. So, these changes, which may seem like chromosomal chaos, could actually be something we could predict. Of course, if you could predict them, this opens the door to scientists and doctors developing new treatments… which could block these evolutionary pathways.”

The team are continuing to leverage their analysis technique on samples taken from patients with lung cancer, as part of Cancer Research UK’s TRACERx project. They said that they hope this will lead to new insights about the genetic changes that drive the spread of lung cancer as well as understanding what changes help these tumours to evade the immune system.