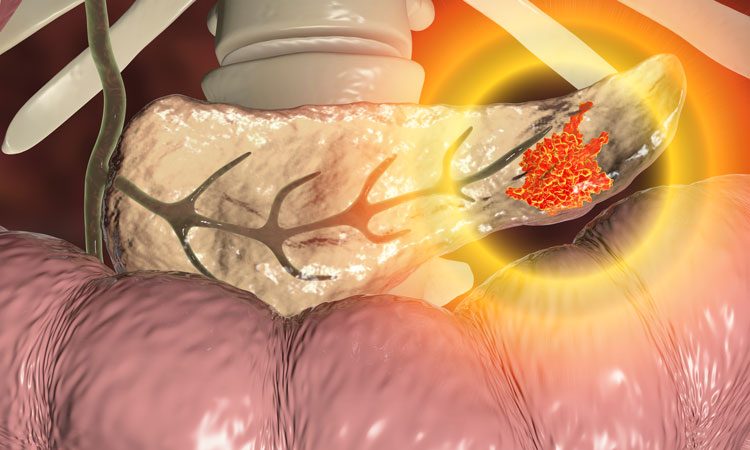 Researchers have identified and validated a promising protein target that could be used in novel chimeric antigen receptor (CAR) T-cell therapies for pancreatic cancer. According to the team, this is the first time a distinct and specific target protein for pancreatic cancer cells has been identified and marks an important step towards a new, more effective treatment option with less toxic side-effects.

CAR T cell therapy is an immunotherapy which takes a patient’s white blood cells and modifies them, so they express a receptor that is specific for a protein expressed by cancerous cells. When the receptor binds, the killer T cells become activated and destroy the cancerous tissue. This technology has revolutionised the treatment of some blood cancers; however, its use in the treatment of solid tumours has been limited, in part because most of the proteins currently used to target CAR T cells to solid tumours are present in low levels on other normal tissues, leading to toxic side effects.

In their study, researchers from Queen Mary University of London, UK, used immunostaining to examine a panel of human pancreatic ductal adenocarcinoma (PDAC) samples and normal tissues for the presence of CEACAM7, a protein which they believed may be specific to pancreatic cancer cells. They found that the protein was undetectable in the normal tissue panel, which included samples from the tonsils, lung, liver and prostate, but was expressed in a large subset of the PDAC samples. From this the team concluded that CEACAM7 may be an ideal target for CAR T cell development against pancreatic cancer.

They then validated the target by developing CAR T cells targeted to CEACAM7 and applying them to PDAC cell lines, as well as a pre-clinical model of PDAC. In the study, published in Clinical Cancer Research, the researchers reported that the novel CAR T cells effectively targeted the CEACAM7-expressing cells in PDAC cell cultures and eliminated cancer cells in a late-stage pre-clinical model of PDAC.

Professor John Marshall from Queen Mary University of London, who led the study, said: “This is an exciting development. Finding that CEACAM7 allows us to kill pancreatic cancer cells specifically with CAR T cells while having no significant toxicity in non-tumour tissues, gives us hope that this strategy could be effective in the future. It is also possible that other types of immune-based therapies could be directed to CEACAM7 for the treatment of pancreatic cancer.”

Dr Deepak Raj, postdoctoral researcher and first author of the study, said: “As CEACAM7 is a poorly studied protein thus far, we were excited to find that it appears a promising CAR T-cell target on pancreatic cancer. It would be important to assess a larger number of antibodies against CEACAM7, not only to generate and test a larger panel of CAR T cells that may have increased efficacy against pancreatic cancer, but also to more conclusively rule whether low levels of CEACAM7 are present in normal tissues.”

About the treatment of pancreatic cancer

PDAC is the most common type of pancreatic cancer and has the lowest survival rate of all the common cancers, with only a seven percent five-year survival rate. Diagnosis often occurs at a point when surgery to remove the tumour – which offers the greatest chance of a cure – is not possible. As a result, there is an urgent need for new and more effective targeted therapies.

Chris Macdonald, Head of Research at Pancreatic Cancer UK, the charity which funded the study, said: “These findings are very encouraging and offer real hope that a new, innovative immunotherapy treatment for pancreatic cancer is on the horizon. For the first time a distinct and specific target protein for pancreatic cancer cells has been identified and, crucially, the brilliant team at Barts have shown that by focusing on it, they can destroy the cancer without damaging healthy tissue.”

He concluded that the study “marks an important step towards a desperately needed new treatment option, which could be both more effective and have fewer side-effects for patients” and that he looks forward to seeing the outcomes of clinical trials targeting the CEACAM7 protein in future.