A combination of chemicals has shown promise in pre-clinical studies to produce muscle stem cells, giving hope for regenerative medicine. 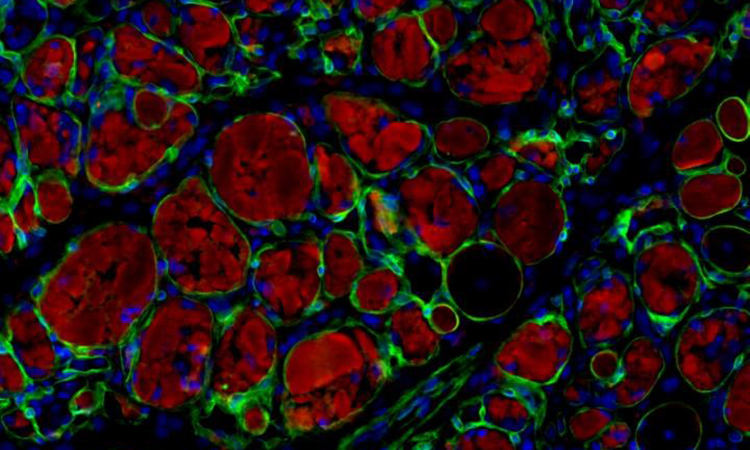 A research team has identified a chemical cocktail that enables the production of large numbers of muscle stem cells, which can self-renew and give rise to all types of skeletal muscle cells. According to the team, from the University of California, Los Angeles (UCLA), US, the advance could lead to the development of stem cell-based therapies for muscle loss or damage due to injury, age or disease.

In fully grown adults, muscle stem cells are quiescent – they remain inactive until they are called to respond to injury by self-replicating and creating all of the cell types necessary to repair damaged tissue. However, that regenerative capacity decreases as people age; it also can be compromised by traumatic injuries and by genetic diseases such as Duchenne muscular dystrophy.

The team identified a chemical cocktail – a combination of the root extract forskolin and the small molecule RepSox – that can efficiently create large numbers of muscle stem cells within 10 days. In mouse studies, the researchers demonstrated two potential avenues by which the cocktail could be used as a therapy.

The researchers tested that approach in three groups of mice with muscle injuries: adult (eight week old) mice, elderly (18 month old) mice and adult mice with a genetic mutation similar to the one that causes Duchenne in humans.

Four weeks after the cells were transplanted, the muscle stem cells had integrated into the damaged muscle and significantly improved muscle function in all three groups of mice.

For the second method, the team used nanoparticles to deliver the chemical cocktail into damaged muscle tissue. The nanoparticles, which are about one one-hundredth the size of a grain of sand, are made of the same material as dissolvable surgical stitches and are designed to release the chemicals slowly as they break down.

The second approach also produced a robust repair response in all three types of mice. When injected into injured muscle, the nanoparticles migrated throughout the injured area and released the chemicals, which activated the quiescent muscle stem cells to begin dividing.

While both techniques were successful, the researchers say the key benefit of the second one is that it eliminated the need for growing cells in the lab – all of the muscle stem cell activation and regeneration takes place inside the body.

The team was particularly surprised to find that the second method was effective even in elderly mice, in spite of the fact that as animals age, the environment that surrounds and supports muscle stem cells becomes less effective.

In future studies, the research team will attempt to replicate the results in human cells and monitor the effects of the therapy in animals for a longer period. The experiments should help determine if either approach could be used as a one-time treatment for patients with serious injuries.

The team envisions that muscle stem cells generated from a healthy donor’s skin cells could be transplanted into a muscular dystrophy patient’s muscle – such as in the lungs – which could extend their lifespan and improve their quality of life.

The research was published in Nature Biomedical Engineering.