A CRISPR gene editing technique has been developed to restore dystrophin, which is missing in many Duchenne muscular dystrophy (DMD) patients. 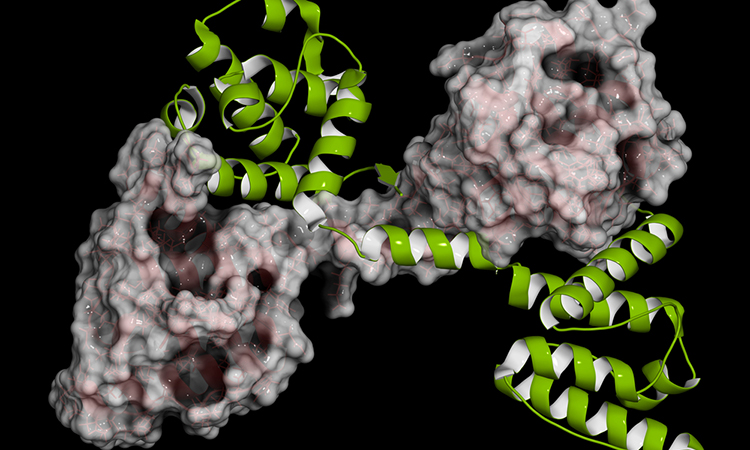 Scientists have successfully employed a new type of gene therapy to treat mice with Duchenne muscular dystrophy (DMD), utilising CRISPR-Cas9-based tools to restore a large section of the dystrophin protein that is missing in many DMD patients. The researchers, from the University of Texas Southwestern, US, say the approach could lead to a treatment for DMD and inform the treatment of other inherited diseases.

“Thousands of different mutations causing Duchenne have been identified, but they tend to cluster into certain parts of the dystrophin gene,” said study leader Professor Eric Olson. Some of these mutations cause muscle cells to produce short, less functional versions of the dystrophin protein. “The power of our method is that you do not need a new gene editing strategy for every patient with a new mutation – you can correct multiple different mutations with a consolidated approach.”

The researchers took advantage of the fact that the enormous dystrophin gene is composed of many different segments called exons, some of which are dispensable. In about eight percent of boys with DMD, nearly half of the dystrophin protein is missing due to mutations within exon 51 that cause the body to stop protein production. The researchers developed multiple successful CRISPR-Cas9 nucleotide gene editing strategies to skip the errant “stop” signal, restoring production of 97 percent of the protein. Some strategies worked by removing neighbouring exons, while others utilised tiny genetic additions or subtractions to get protein production back on track.

When the researchers used the new approach in mice with dystrophin mutations, functioning copies of dystrophin returned to more than half of all leg muscle fibres within three weeks. Moreover, the group showed that they could use isolated cells from mice or humans with DMD to test whether the approach would be successful for a particular patient ahead of treatment. The isolated cells are coaxed to develop into induced pluripotent stem cells (iPSCs) and then heart cells. In a dish, researchers could observe whether the gene editing programme helped the heart cells to work better. 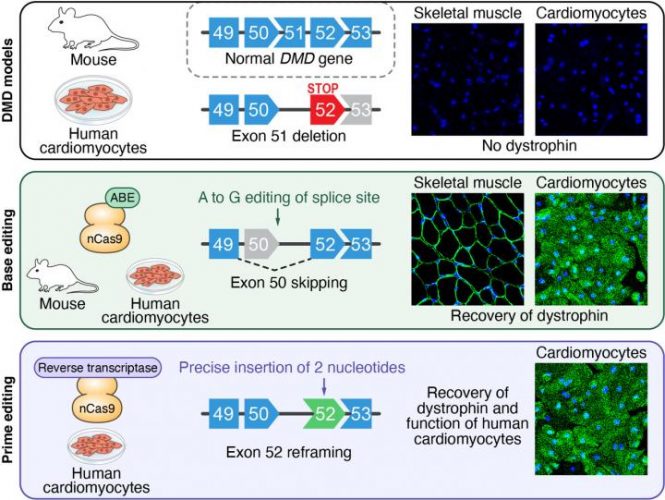 The team say that additional safety studies in animals are needed before the therapy is used in humans, as well as more work to optimise the virus that carries the gene editing machinery to muscle and heart cells. However, by showing that multiple CRISPR-Cas9 strategies can correct a mutation, the researchers have expanded the toolbox of potential gene therapy options for DMD.

“Every cell in the human body has three billion letters of DNA sequence in its genome and this method makes it possible to correct large deletions in the DMD gene by specifically swapping one of these letters,” said Olson. “That level of specificity and efficiency is remarkable.”