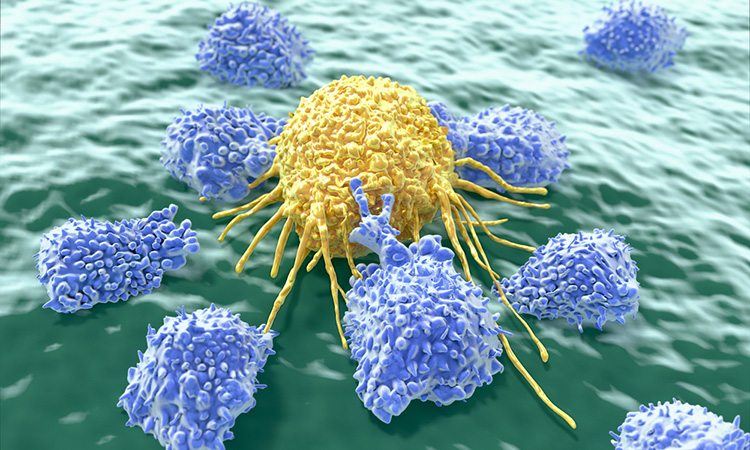 Researchers at Washington University School of Medicine in St Louis, US, have shown in pre-clinical studies in mice and human cells that a type of cell-based immunotherapy could be effective against solid tumours, starting with melanoma. The immunotherapy is based on utilising the immune system’s natural killer (NK) cells and has been effective in treating patients with recurrent leukaemia and other difficult-to-treat blood cancers.

The NK cells are harvested from the patient’s or a donor’s blood and exposed to a set of chemical signals called cytokines that activate the cells and prime them to remember this activation. When these “cytokine-induced memory-like” NK cells are given to the patient, they are more potent in attacking the cancer.

“These ‘revved-up’ memory-like NK cells attack blood cancers quite well,” said Professor Todd Fehniger, the study’s co-senior author. “But relatively little work has been done on whether these cells can be used against solid tumours. This is an unmet need in solid tumour oncology. Our study provides proof-of-principle that memory-like NK cells respond better than normal NK cells against melanoma and it serves as a stepping stone to a first-in-human clinical trial of these cells in advanced melanoma.”

The researchers studied human NK cells from both healthy people and from patients with melanoma and found that the cytokine-induced memory-like NK cells could effectively treat mice harbouring human melanoma tumours. Tumours shrank to the point of being almost undetectable in many of the mice and the memory-like NK cells prevented the tumours from returning in most cases for the duration of the 21-day experiment. While normal NK cells also reduced and controlled melanoma tumours, they did not do so to the same degree.

“We are currently designing a clinical trial to evaluate these NK cells in patients with advanced melanoma who have exhausted all other treatment options,” Fehniger said. “We would like to investigate NK cells from a donor and a patient’s own NK cells to see if the cytokine-induced memory-like NK cells offer an effective treatment option for patients with this aggressive skin cancer.” 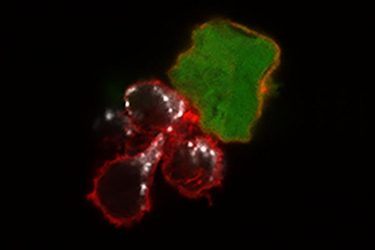 A new study from Washington University School of Medicine in St Louis demonstrates, in mice and human cells, that a cell-based immunotherapy may be effective against melanoma. Until now, such therapy – based on the immune system’s NK cells – has only been used against blood cancers. Shown are three “memory-like” NK cells (red) attacking a melanoma cancer cell (green). The white areas show toxic molecules that the natural killer cells use to destroy the tumour cell [credit: Nancy Marin/Fehniger lab].

“Even 10 years ago, we had no effective therapies for advanced melanoma – much like the lack of therapies for glioblastoma or advanced pancreatic cancer today,” said co-senior author Dr Ryan Fields. “Checkpoint immunotherapy has revolutionised melanoma treatment, but we’re still not satisfied with the 50 percent response rate. We want to do better, and this NK cell therapy is a promising approach.”

The study is published in Clinical Cancer Research.