Investigation of venom use in stem cell differentiation

Stem cells differentiate to form more than 200 specialised cells, including erythroid bodies, haematopoietic cells, myogenic cells, neural cells, signalling cells and structural cells, such as hepatocytes. Differentiation of stem cells triggers a number of variable changes in the cell, such as membrane potential, responsiveness to signal, metabolic activities, and most importantly their specialisation often involving size and shape… 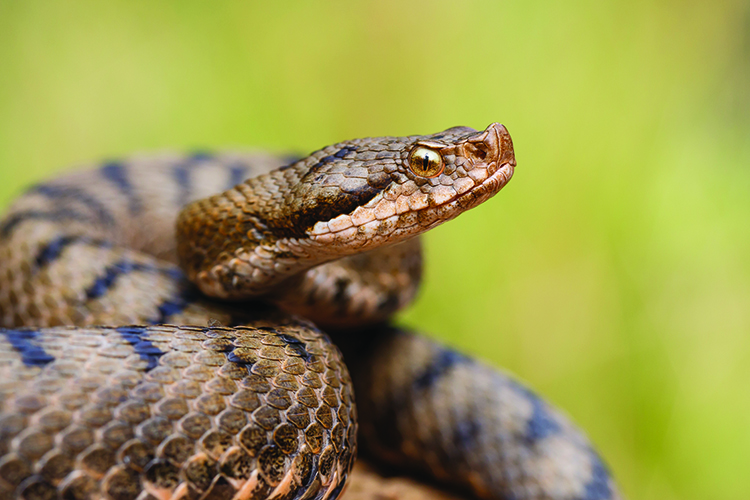 Alterations in gene expression make a very significant contribution to these changes and continue through the life of the differentiated cell. The DNA sequence usually remains the same during cellular differentiation, with a few exceptions (as with germ cells). Stem cell differentiation is crucial in embryogenesis; numerous specific cells are produced in precise locations to form the organism in a carefully controlled sequence. Embryonic stem (ES) cells formed during this process are being investigated to treat a wide range of diseases.

The success of the clinical application of ES cells depends on proper isolation, manipulation, expansion and differentiation of the cells1. The identification of the appropriate growth factors necessary to maintain the proliferation of undifferentiated state of ES cell is important in the development of the optimal culture condition. In addition, the efficient control of the in-vitro differentiation of the ES cell to a specific cell type is a crucial issue in ES cell research.

Variable ES cell differentiation methods have been developed for certain tissues. The frequently used method is the aggregation of ES cells creating embryoid bodies (EB). The stem cells are cultured in the absence of differentiating signals, thus, the ES cells proliferate into specialised cells in the form of these embroid bodies. The cells induce each other to differentiate, which is similar to early embryogenesis. In human ES cells, EBs are generated and then isolation of the ES cell colonies takes place using either mechanical transfer or enzymatic transfer from the EBs. The selected colonies are grown in different media and plates depending on the pathway required.

ES cells can also be differentiated by combined culturing with specific feeder cells, which is usually employed in producing haematopoietic and neuronal stem cells from ES cells. This method is highly effective in programming ES cells into a specific lineage. However, the separation of feeder cells from specialised cells is critical because the remains of the feeder cells pose concern due to xeno-contamination. ES cell differentiation in a specific monolayer substrate without feeder cells reduces the influences of other factors that may affect differentiation2. The key limiting step has been finding the parameters and reagents to initiate and maintain the differentiated phenotype.

The following are examples of signalling pathways involved in stem cell differentiation.

This pathway is crucial in embryonic development across a vast phylogenetic distance. The hedgehog signalling protein is expressed in concentration gradients in various parts of the embryo to coordinate development of multicellular organisms. Among the three hedgehog homologues, sonic is the most researched. This pathway is a highly coordinated and orchestrated network3. When sonic 29 hedgehog (shh) protein is present, its protein complex will release a complete Gli3 in the nucleus to stimulate Hh target genes such as Gli1. Current research suggests that incorrect activation of Hh pathway may contribute to human tumour formation. Most tumours investigated such as skin, brain and muscles have been demonstrated to show Hh pathway activation. Therefore, tight control of such a pathway is needed to produce safe stem cell therapies.

Like Hh this is another evolutionary conserved pathway involved in regulation of organ size in an animal by controlling proliferation and apoptosis. Hippo signalling occurs through a kinase-dependant mechanism to control transcription of sensitive genes.

This plays a major role in the development of organs and tissues including cell fate determination, axis and polarity of cells and tissues. Wnt signalling has also been implicated in stem cell renewal and expression of wnt is under very tight regulation during embryogenesis.

The combined effect of growth factors and cytokines with haematopoietic stem cells determines the possibility of differentiation into a specific lineage or self-renewal of the stem cell depending on the stress level. Proliferation and apoptosis of stem cells are regulated by activated protein kinase receptors through phosphorylation of eukaryotic initiation factor5. There is a suggestion that the loss of protein kinase receptor expression is associated with increased growth and malignancy.

Venoms are complex mixtures made up of carbohydrates, peptides, proteins, nucleotides, ions and biogenic amines, with a small amount of lipids and amino acids. Venom is a toxin injected into victims by venomous animals such as snakes, spiders, scorpions, insects, fish, jellyfish and others through bites or stings. Their complexity varies from ordinary phenols and organic acids in some venom, to sophisticated combinations of proteins with a wide range of pharmacologically active substances, as often found in snake venoms.

Many venom components have significant medical importance. To give some examples, apamin is a component of honey bee venom, which efficiently blocks the SK2 and SK2 genes expression in an animal model of atherosclerosis, and has been shown to exert antifibrosis effects6, while a snake venom ‘thrombin-like enzyme’ known as batroxobin, derived from Bothrops atrox moojeni, is currently used in the treatment of deep vein thrombosis through thrombolysis. It continues to degrade the fibrin chains even after the clot has formed. Another example of a venom component is C-type lectin, which is a non-enzymatic, calcium dependent carbohydrate-binding protein. It has been utilised in cancer therapy, through reduction in cell viability of gastric carcinoma cells due to the cytotoxic properties disrupting the actin filaments and apoptosis. Cyclin D is involved in controlling the progression of cell cycle by activating cyclin-dependent kinase (Cdk) enzyme. Cyclin-D1 amplification has been a point of discussion in cancer therapy resistance using tamoxifen.

Disintegrins are a family of proteins found in viper venom that interfere with integrin signalling pathways. These affect many cell adhesion pathways including the coagulation pathway, by inhibiting the aggregation of platelets7. In total approximately fifteen drugs on the market are known to have involved venom in their research or are venom peptides.

The improved understanding of stem cell pathways and their application as therapeutic agents is the basis of hope for many of incurable diseases. Stem cells have the potential to regenerate and repair tissue injury or aid in disease recovery. This regenerative ability of stem cells applied in certain disorders, such as diabetes, stroke, spinal cord injury, macular degeneration, burns, rheumatoid arthritis, heart disease and osteoarthritis, will promote longevity.

The aim of this study was to investigate weather venom peptides could be screened as novel cheaper ways to differentiate stem cells. The table was produced through critically reviewing the literature, listing the stem cell markers in these pathways and then searching for overlap with venom publications. The result has only scratched the surface but suggests that venom components such as snake venom fibrin sealant, scorpion venom peptides and batroxobin could have a role in stem cell research. Potentially screening venom peptides could elucidate unknown pathways and lead to further advances in stem cell biology.

The improved understanding of stem cells and their application as therapeutic agents is the basis of hope for the development of better therapy for numerous diseases. Stem cells have the potential to regenerate and repair tissue injury or aid in disease recovery in disorders such as diabetes, stroke, spinal cord injury, macular degeneration, burns, rheumatoid arthritis, heart disease and osteoarthritis. One of the hurdles is the difficulty and cost of promoting and controlling stem cell differentiation. Several venom components, including snake venom fibrin sealant, scorpion venom peptides and batroxobin could have potential for use in this field. This project has just scratched the surface of how looking to nature, specifically venoms could help unlock problems in stem cell research due to the potent pharmacological action of venom components.

GINIKA J. JIDEOFOR is a Biomedical Scientist in Stoke Mandeville Hospital, Buckinghamshire Healthcare NHS Trust. She is a specialist in haematology and blood group serology and currently performs a range of laboratory investigations using both automated and manual techniques. She is also registered with the Health Care Professional Council (HCPC) United Kingdom. Mrs Jideofor earned her bachelors degree in Medical Laboratory Science at Ambrose Ali University, Nigeria, and obtained her Masters degree in Medical Diagnostics at Cranfield University. Her Masters thesis in ‘Venom Use in Stem Cell Differentiation’ forms the basis of this article.

DR. JEFF NEWMAN has worked for Cranfield University since 1990, during which time he has undertaken research and consultancy into many areas of industrial biotechnology. For many years, Jeff has led Cranfield Biotechnology Centre’s consultancy service, which offers industry a service encompassing market and technological surveys, identifying new opportunities and developing company strategy. Jeff is the founding Editor-in-Chief of the journal Biosensors. He is also very active in teaching and is Programme Director for the Advanced Biotechnology MSc courses in Medical Diagnostics, Biomedical Engineering and Analytical Biotechnologynal Medicine.

New study helps improve the understanding of bacteria and viruses