Researchers have successfully generated organoids in suspension, offering the possibility of larger-scale experiments to study human development and disease. 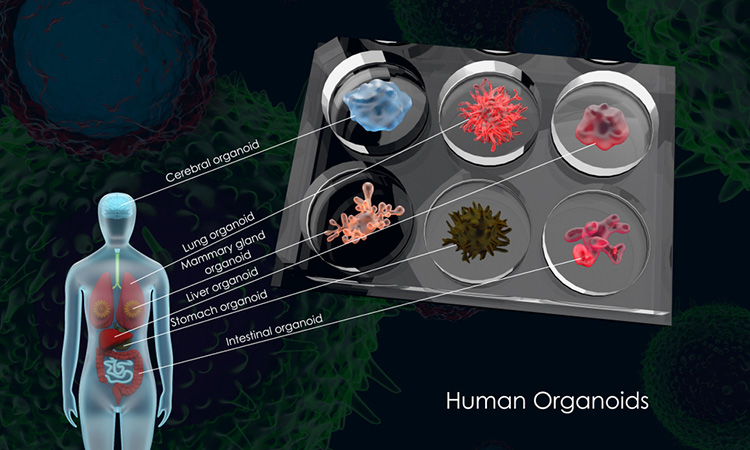 A University of Michigan Medical School, US laboratory has developed a new, significantly simpler way of cultivating a three-dimensional (3D) model of the intestine that leads to increased complexity and organisation. The advance, published in Cell Reports, reveals how intestinal organoids can now include cells that make up the serosal mesothelium.

Previous research growing various types of mini organs relied on a supportive gel called Matrigel, which forms a 3D scaffolding that allows different cell types to develop into an organoid. However, this gel has many limitations, including cost. It is also derived from mouse tumour cells, therefore contains unknown biological components.

Earlier research by the scientists determined that intestinal organoids could be grown in a simpler, biologically-inert alginate gel, as they form their own supportive mesenchymal cells. This finding led the team to examine whether the cells needed a 3D growth environment at all and they concluded that it is not needed. In the new paper, they describe their successful generation of the human intestinal organoid in a simple suspension culture.

The team’s next step was to see whether these floating mini-intestines could function like a developing human intestine and they sought to use the organoids to understand how the serosal layer forms, noting that little is known about this process in the context of human development.   The team therefore interrogated the chemical cues that cause the serosa to form in suspension culture.

Given that abnormal development of the serosa can lead to congenital defects, the team hoped to leverage the organoids to uncover how this tissue layer forms normally. Using drugs that block the activity of specific proteins, the team identified two pathways, called Wnt and Hedgehog, that were essential for the normal formation of the serosa. Though the suspension method resulted in fewer organoids overall, for researchers using human pluripotent stem cells, the method could be a game-changer.

The team hopes that suspension culture will open the possibility of larger-scale organoid experiments and will be an improved system to study human development and disease.