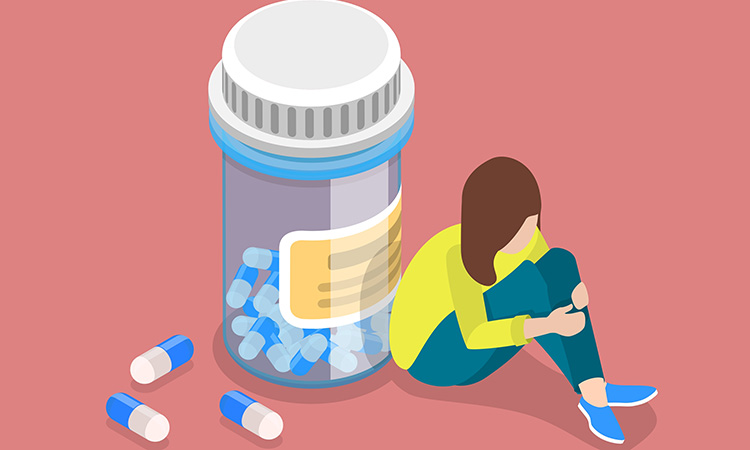 A new study at the University of California, Irvine, US has shown an important connection between circadian rhythms, metabolism and addiction. Through analysing the liver metabolome of mice deficient in the expression of the dopamine D2 receptor (D2R) in striatal medium spiny neurons, the researchers found profound changes in the liver circadian metabolome compared to control mice. They also found that activation of dopaminergic circuits by acute cocaine administration reprogrammes the circadian liver metabolome. The details of the study were recently published in Proceedings of the National Academy of Sciences.

“D2R signalling in medium spiny neurons is key for striatal output and is essential for regulating the first response to the cellular and rewarding effects of cocaine,” said Dr Emiliana Borrelli, Professor of Microbiology and Molecular Genetics at UCI School of Medicine. “Thus, our results suggest that changes in dopamine signalling in specific striatal neurons evoke major changes in liver physiology. Dysregulation of liver metabolism could contribute to an altered allostatic state and therefore be involved in continued use of drugs.”

The circadian clock is tightly intertwined with metabolism and relies heavily on multifaceted interactions between organ systems to maintain proper timing. Genetic and/or environmental causes can disrupt communication between organs and alter rhythmic activities. Substance use leads to altered dopamine signalling followed by reprogramming of circadian gene expression and metabolism in the reward system.

“This study shows that D2R in striatal medium spiny neurons play a key role in regulating diurnal liver metabolic activities. In addition, drugs that increase dopamine levels, such as cocaine, disrupt circadian metabolic profiles in the liver, which is exacerbated by loss of D2R signalling in medium spiny neurons. These results uncover a strict communication between neurons/brain areas and liver metabolism as well as the association between substance use and systemic deficits,” said Borrelli. 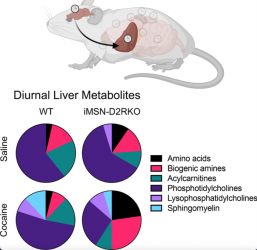 “Our studies show that alterations of dopaminergic signalling in the brain affects liver metabolism in a circadian manner. Metabolic inter-tissue communication is highly dynamic and easily influenced by external factors. Indeed, the metabolic perturbations observed between normal mice and those with an impaired dopamine D2R signalling in striatal medium spiny neurons is greatly enhanced by cocaine, a substance of abuse and psychomotor stimulant, as shown in the pie charts. These results highlight the important connectivity between single type of neurons and metabolism and show how psychoactive drugs impact physiology through direct brain-liver connections,” continued Borrelli.

Future studies will examine whether the alterations in the specific metabolites identified in this study contribute to susceptibility to drug use.