In a new study, researchers have demonstrated the efficiency of T-cell immune response against the Omicron variant of SARS-CoV-2. 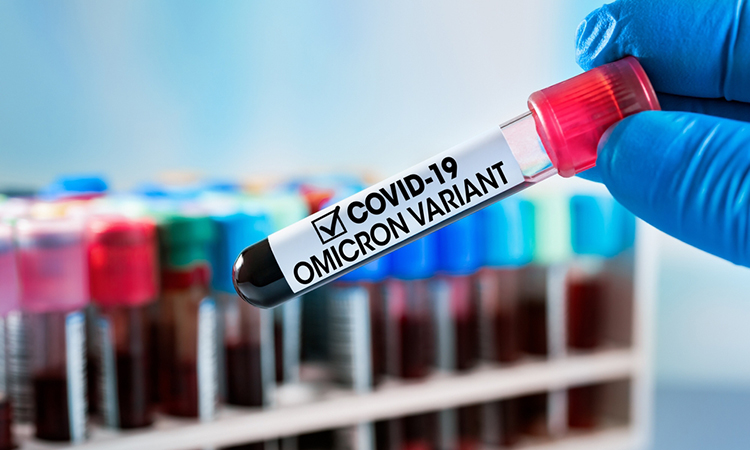 Researchers from HSE University and the RAS Institute of Bioorganic Chemistry, both Russia have demonstrated the efficiency of T-cell immune response against the Omicron variant of SARS-CoV-2. The study, which was recently published in PeerJ, showed that in approximately 90 percent of vaccinated Europeans, T-cell immunity was as effective against Omicron as with other variants.

Those who have already had the disease or who have been vaccinated are getting infected more often as the new mutations help the virus spread more effectively and avoid antibodies. At the same time, recent data shows that the severity of the disease in vaccinated patients is significantly lower than in people who have not contacted the virus. The researchers assume that this can be explained by several factors: First, the Omicron variant is slower at infecting the human cells; second, there is a hypothesis that a lighter course of the disease is related to effective action of T-cell immunity.

The development of T-cell response starts from the recognition of virus peptides with the molecules of the human major histocompatibility complex (HLA). The more peptides that are recognised, the faster and more efficient T-cell immunity is. Virus mutations can change such peptides, which is why they can stop being recognised by HLA molecules, and the T-cell response will be less effective.

T-CoV, a bioinformatics algorithm, demonstrated that the Omicron variant avoided none of the HLA molecule variants. But it detected several HLA molecule variants that started to become less effective at recognising the Omicron’s S-protein. An outstanding discovery was the HLA-DRB1*03:01 variant of the molecule—the most important peptide of the virus managed to avoid it. Interestingly, both types of Omicron, BA.1 and BA.2, evaded immune response recognition, though this was achieved by completely different mutations. 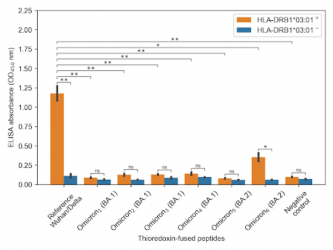 Peptides of the Wuhan basic variant and the Delta variant bind well with HLA-DRB1*03:01 (high orange column on the left), while Omicron BA.1 and BA.2 peptides are no longer recognised by this molecule
[Credit: S.Nersisyan et al].

The bioinformatics calculations were verified experimentally in a laboratory. The researchers proved that there is no binding between Omicron peptides and HLA-DRB1*03:01 molecule, which was expressed in vitro.

The researchers emphasised that the initial peptide from the Wuhan basic variant, as well as Delta peptide, are recognised effectively by this molecule. The authors also emphasised that the detected HLA-DRB1*03:01 variant is present in a big share of the global population: for example, in 8.9 percent of Europeans.

“The population diversity of HLA molecules, as well as the specificity of their work do not let the virus avoid the T-cell immune response. But the virus has managed to hide its S-protein from one of the HLA molecules. Importantly, most of COVID-19 vaccines (Sputnik V, Pfizer, Moderna, AstraZeneca and some others) carry specifically this virus protein. This means that people with the variant HLA-DRB1*03:01 (who make up 9 percent of Europe’s population, for example) vaccinated by S-protein may suffer from a more severe course of the disease caused by the Omicron variant,” said Alexander Tonevitsky, Dean of the HSE Faculty of Biology and Biotechnology.