A new insight into the way the EGF receptor sends signals into cells could help researchers design new cancer drugs that target this protein. 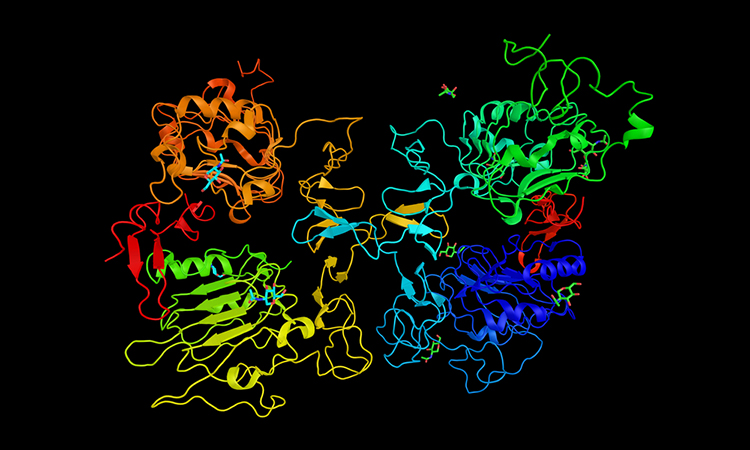 In a new study that was recently published in Nature Communications, researchers from the Massachusetts Institute of Technology (MIT) describe their discovery of how epidermal growth factor receptors (EGFR) changes its shape when it binds to its target, and how these changes trigger cells to grow and proliferate. The receptor is overexpressed in many types of cancer and is the target of several cancer drugs. These drugs often work well at first, but tumours can become resistant to them. Understanding the mechanism of these receptors better may help researchers design drugs that can evade that resistance.

Like most cell receptors, the EGFR spans the cell membrane. An extracellular region of the receptor interacts with its target molecule; a transmembrane section is embedded within the membrane; and an intracellular section interacts with cellular machinery that controls growth pathways.

The extracellular portion of the receptor has been analysed in detail, but the transmembrane and intracellular sections have been difficult to study because they are more disordered and cannot be crystallised.

In a study carried out five years ago, the team set out to try to learn more about those lesser-known structures. The researchers embedded the proteins in a special type of self-assembling membrane called a nano disc, which mimics the cell membrane. Then, they used single-molecule fluorescence resonance energy transfer (smFRET) imaging to study how the conformation of the receptor changes when it binds to EGF.

The researchers labelled the nano disc membrane and the end of the intracellular tail of the protein with two different fluorophores, which allowed them to measure the distance between the protein tail and the cell membrane, under a variety of circumstances.

To their surprise, the researchers found that EGF binding led to a major change in the conformation of the receptor. Most models of receptor signalling involve interaction of multiple transmembrane helices to bring about large-scale conformational changes, but the EGF receptor, which has only a single helical segment within the membrane, appears to undergo such a change without interacting with other receptor molecules.

The researchers also used their model to discover that positively charged amino acids in the intracellular segment, near the cell membrane, are key to these interactions. When the researchers mutated those amino acids, switching them from charged to neutral, ligand binding no longer activated the receptor.

The researchers also found that cetuximab, a drug that binds to the EGF receptor, prevents this conformational change from occurring. Cetuximab has shown some success in treating patients with colorectal or head and neck cancer, but tumours can become resistant to it. The researchers hope to learn more about the mechanism of how EGFR responds to different ligands to design drugs that might be less likely to lead to resistance.