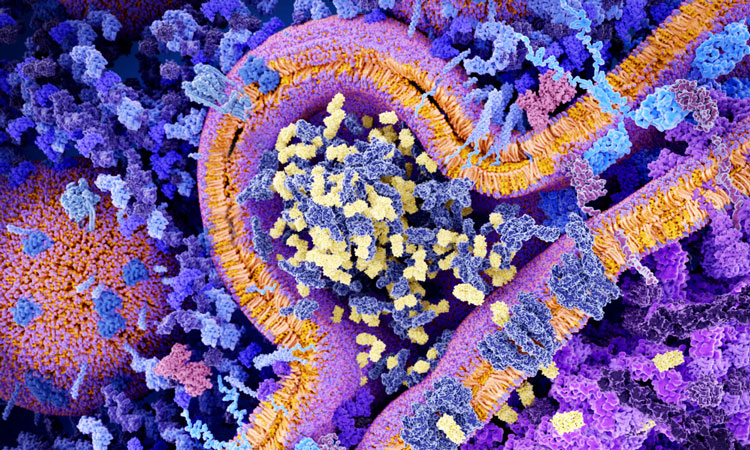 The Atg2 protein has been analysed for the first time, with researchers discovering how the protein tethers itself to the pre-autophagosomal membrane to the endoplasmic reticulum during autophagosome formation. Despite the process of autophagy being known, the role of individual Atg protein are still poorly understood.

Autophagy deals with the destruction of cells in the body, and is a normal physiological process in the body. It degrades RNA and organelles, and maintains homeostasis. When the process is induced by stress, such as the starvation of nutrients, a flattened membrane vesicle expands spherically to engulf materials to be degraded. It then closes to form a double-membrane vesicle called the autophagosome.

This autophagosome fuses with a vacuole or lysosome, and the materials inside are degraded by enzymes in the lysosome/vacuole.

The team, from the Tokoyo Institute of Technology, found that the protein is made up of 1,592 amino acids, but functional domains are not predicted based on the amino acid sequence. Comparing the Atg2 among varying organisms revealed that N- and C-terminal regions have been highly conserved. The team also found that both these regions are vital to the function of Atg2.

Through in vitro analysis using purified yeast cells and liposomes, the group demonstrated that both the N- and C- terminal regions of Atg2 have the ability to bind to a membrane. They also discovered that Atg2 tethers the two membrane structures together by means of these two membrane-binding regions.

In contrast, the N- terminal region was found to be involved in the association of Atg2 with the endoplasmic reticulum.

The research team suggest that as these findings are related to neurodegeneration and cancer, the investigation of the mechanism of autophagosome formation is anticipated to provide fundamental information to discovering drugs to treat autophagy-related diseases.