Researchers have discovered a new type of T-cell receptor that can kill most cancer types while leaving healthy cells unharmed. 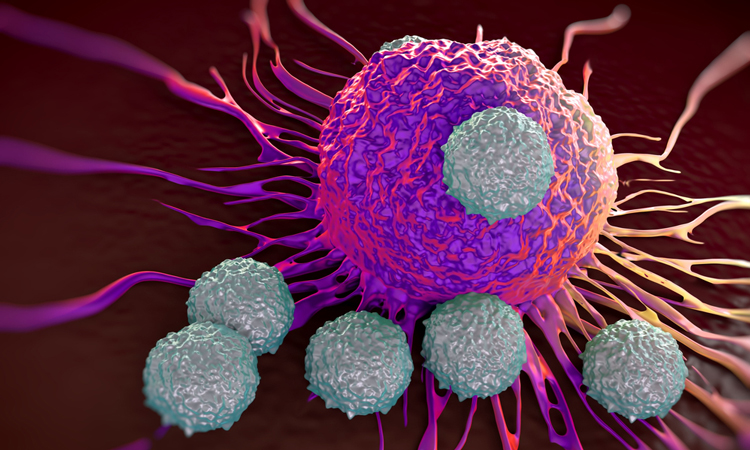 A novel type of killer T cell has been identified as a potential universal cancer therapy. The most widely used T-cell therapy, CAR T, is personalised to each patient but only targets a few types of cancers and has not been successful in solid tumours.

…MR1 does not vary from patient to patient, making it a new target for immunotherapies”

This TCR recognises a molecule present on the surface of a wide range of cancer cells as well as in many of the body’s normal cells but can distinguish between the two. The T-cell scanning system recognises small parts of cellular proteins that are bound to cell-surface molecules called human leukocyte antigens (HLAs).

As HLA varies widely between individual patients, it has previously prevented scientists from creating a single T-cell treatment that targets many cancers. However, the researchers found a unique TCR that can recognise many types of cancer via a single HLA-like molecule called MR1.

According to the researchers, MR1 does not vary from patient to patient, making it a new target for immunotherapies.

To test the cells in vivo, the researchers injected T cells able to recognise MR1 into mice models of human cancer. The findings were comparable to the National Health Service (NHS) approved CAR-T therapy in a similar animal model.

The researchers believe that the process may work by sensing changes in cellular metabolism, causing different metabolic intermediates to be presented at the cancer cell surface by MR1.

Professor Andrew Sewell, lead author on the study from Cardiff University’s School of Medicine, said: “We hope this new TCR may provide us with a different route to target and destroy a wide range of cancers in all individuals… Current TCR-based therapies can only be used in a minority of patients with a minority of cancers.”

Professor Oliver Ottmann, Cardiff University’s Head of Haematology, whose department delivers CAR-T therapy, said: “This new type of T-cell therapy has enormous potential to overcome current limitations of CAR T, which has been struggling to identify suitable and safe targets for more than a few cancer types.”