Copper ions could be key to blocking cancer metastasis

Researchers have identified that copper ions and their protein transporters, such as Atox1, are key to cancer cell movement and could be targeted by therapies. 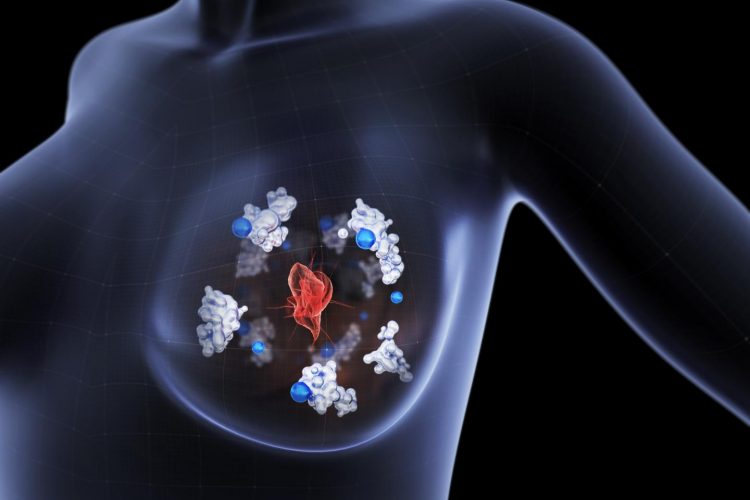 The copper-transporting protein Atox1 (illustrated in white) delivers copper (blue) to an enzyme which facilitates breast cancer cells to migrate away from the primary tumour (red) and metastasise towards other parts of the body (credit: Illustration: Boid).

A team exploring how breast cancer cells metastasise have discovered that Atox1, a protein involved in copper ion transfer and cell movement, could be a potential biomarker for breast cancer aggressiveness and a new target for therapeutics.

Previous studies have shown that cancers, including breast cancer, are associated with higher copper levels in the blood and tumour cells. While copper is vital for many cellular functions in controlled amounts free copper ions are toxic, so they are bound to proteins. The precise use for copper by cancer cells was previous unknown.

In their previous research, scientists at Chalmers University of Technology, Sweden, identified that Atox1, protein that acts as a copper ion transporter – transferring copper to other proteins, is not only upregulated in cancer, but also places itself along the leading edge of migrating breast cancer cells, so may be involved in cell movement.

…analysis of 1,904 breast cancer patient records on a database found that patients with tumours with high Atox1 levels had drastically lower survival times”

In their latest study, published in PNAS, the team used live-cell video microscopy to track how hundreds of individual cancer cells moved, with and without the presence of Atox1.

“We were able to demonstrate that the cells moved at higher speeds and over longer distances when Atox1 was present, compared to those same kinds of cells moving without the protein,” revealed Stéphanie Blockhuys, first author of the study and a Postdoctoral Researcher in Chemical Biology at Chalmers.

Through further experiments the researchers identified that Atox1 drives cell movement by triggering a reaction chain. Atox1 passes copper ions to a second copper transporter, called ATP7A, which then passes the copper to the enzyme lysyl oxidase (LOX). LOX is known to be involved in extracellular processes facilitating breast cancer cell migration and requires copper to function.

“When Atox1 in the cancer cells was reduced, we found LOX activity to be decreased. Thus, it appears that without Atox1, LOX doesn’t receive the copper required for its cell migration activity,” said Blockhuys.

The researchers also analysed 1,904 breast cancer patient records on a database and found that patients with tumours with high Atox1 levels had drastically lower survival times. They suggested Atox1 could therefore be used as a biomarker for cancer aggressiveness and to determine if a treatment to remove copper from the body could be appropriate.

They also suggest Atox1 could also become a target for drugs to block metastasis to increase survival times.

“What we have found could be important for all types of cancer. How cancer cells move is a fundamental process that we still don’t understand well enough,” concluded Wittung-Stafshede.

The team now intends to move their experiments to small animal models and investigate whether there are other copper-binding proteins involved.