Researchers show that the mutated huntingtin protein associated with Huntington’s disrupts the transport of essential proteins within the neuron, potentially highlighting an early cause of the disease. 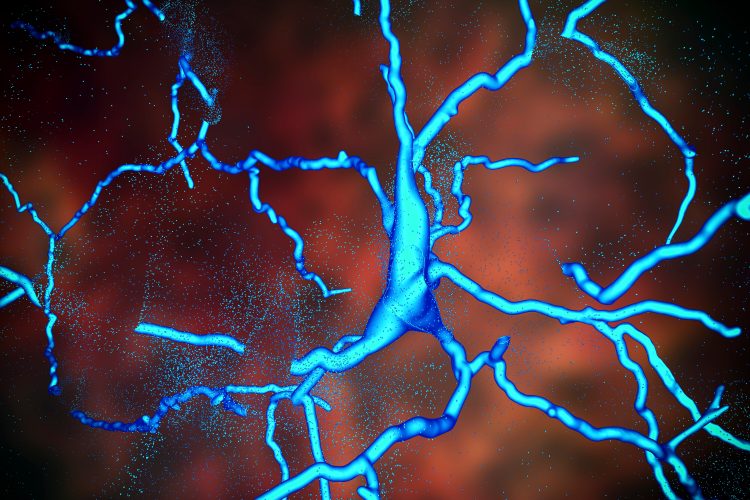 A new study reveals that the huntingtin protein (HTT), known to cause Huntington’s disease, may interfere with axonal transport, causing neurons to die off due to a lack of proteins essential to their function and health.

Axonal transport is the system by which vital materials, such as proteins and nutrients, travel along the axon of the neuron in vesicles. According to researchers, HTT is sometimes packaged along with other proteins within vesicles to be transported along the neuron; however, when mutated HTT, like that seen in Huntington’s, is packaged it can disrupt the movement of these vesicles causing defects in the synapses of the cells and cell death.

In their study on fruit fly larvae, the mutated form of HTT that causes Huntington’s disease disrupted the normal movement of vesicles, called endosomes, which contained HTT and the protein Rab4. This led to defects in the synapse; difficulties with crawling; and decreased lifespan. However, the team also identified a mechanism to overcome this: when larvae carrying the HTT mutation were engineered to also produce excess Rab4, some of these symptoms, including abnormalities in synapses, crawling and lifespan, were less pronounced.

“When it comes to finding therapies for neurological diseases, a lot of the research focuses on the pathology and aggregation of proteins, but that may not be the actual cause,” said Dr Shermali Gunawardena, associate professor of biological sciences in the University at Buffalo College of Arts and Sciences, US. “We want to try to figure out what might be going on earlier. We want to come in from a different angle and say, ‘are huntingtin and Rab4 normally present together in healthy neurons? And then, what are they doing in the context of a disease state?’”

Joseph White II, study co-first author and a UB biological sciences PhD graduate added: “This research helps shed light on the normal function of huntingtin and how it is altered in disease. Based on what we are seeing, HTT seems to be important for the transport of a particular type of vesicle known as endosomes within neurons. We believe this presents a potential avenue for therapeutics aimed at improving endosomal transport in Huntington’s disease patients.”

The research published in Acta Neuropathologica Communications, builds on past work in Gunawardena’s lab where they showed that mutated HTT can also perturb the movement of some other Rab proteins. Gunawardena explained that their findings suggest that potential treatments focusing on axonal pathways may need to be multifaceted, involving a number of drugs targeting different problems.

“The idea behind our work is to tease out these details about what is going on inside neurons,” she said. “It is really difficult to isolate what is going on inside the organism. But from what we have done in the lab, we can say now that huntingtin is in these different, specific kinds of cargoes. I think the bottom line is that this protein is doing a lot of different things.”