Researchers have found the TBK1 enzyme regulates the degradation and clearance of the huntingtin protein, making it a drug target for Huntington’s disease. 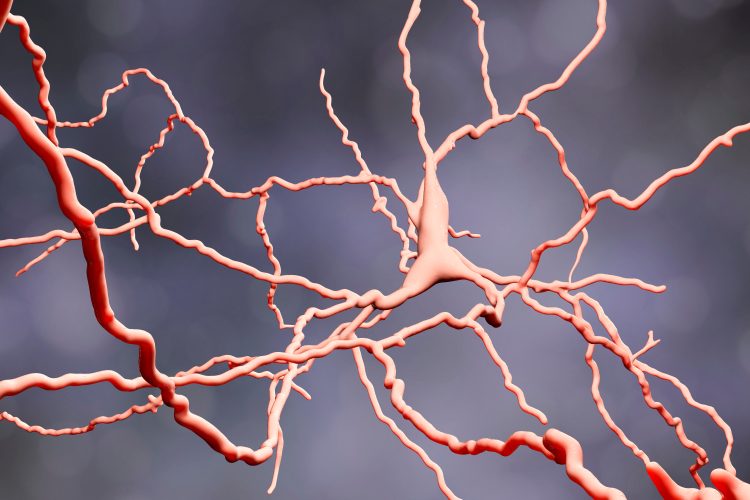 Scientists have identified an enzyme they say is an attractive drug target for Huntington’s disease. The researchers found that the enzyme plays a central role in regulating the degradation and clearance of the huntingtin protein and introduces chemical modifications that block its aggregation – process that lead to the disease progression.

The research was conducted by scientists at the lab of Professor Hilal Lashuel at École polytechnique fédérale de Lausanne (EPFL), Switzerland.

According to the researchers, Huntington’s is caused by a mutation in the gene that encodes the protein huntingtin, causing it to build an abnormally long tail of the amino acid glutamine. This tail prevents huntingtin from folding properly and as a result it aggregates inside neurons of the brain and eventually kills them.

The most popular strategy to combat the disease is to lower the levels of huntingtin, inhibit its aggregation or use a combination of both. The way to do this is to either “silence” the huntingtin gene or to activate cellular mechanisms that promote the degradation of the protein itself. Now, scientists at EPFL have identified a new enzyme called “TBK1” that does both.

The TBK1 enzyme is a kinase, which are enzymes that add phosphate groups to various biomolecules like proteins or DNA. Previous studies have shown that artificially adding phosphate groups to huntingtin can stop it from aggregating and causing Huntington’s disease.

“However, to explore the therapeutic potential of phosphorylation, we needed to identify the natural kinases that do the job inside the cell,” said Lashuel. “After screening hundreds of kinases, we were excited to identify TBK1, because it did the job with high specificity and efficiency.”

The researchers found that, when TBK1 adds a phosphate group anywhere in the first 17 amino acids of huntingtin, it inhibits its ability to aggregate. This was the case for both the normal and mutated versions of huntingtin. In addition, increasing TBK1 levels in cells leads to over-phosphorylation of a specific amino acid (a serine) in the huntingtin chain. This stabilises the protein and prevents it from aggregating. 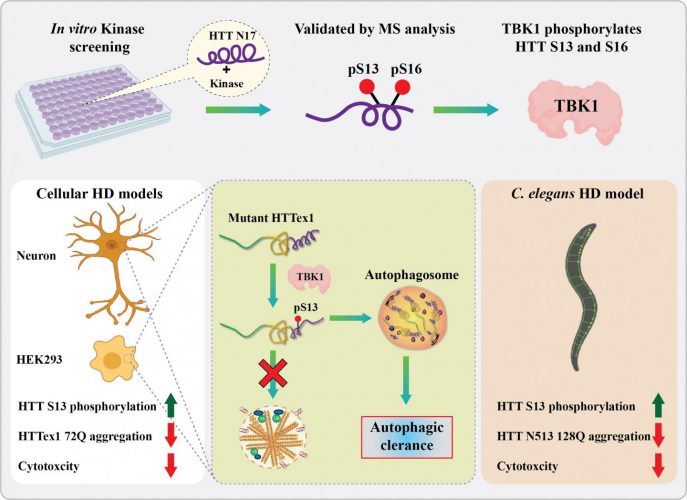 Using an in vitro kinome screen, the lab of Hilal Lashuel at EPFL identified a novel kinase (TBK1) that Phosphorylates the huntingtin protein at S13 and S16 and showed that it plays a vital role in regulating its aggregation, clearance and toxicity. In cells, TBK1 phosphorylates HTT at S13, leads to the reduction of mutant HTT aggregates in cells and C. elegans, and protects against HTT toxicity via a mechanism that involve increasing HTT S13 phosphorylation and/or promoting the clearance of soluble HTT via autophagy [credit: R.N. Hegde and H. Lashuel (EPFL)].

Finally, TBK1 was also found to signal the cell to degrade and clean out huntingtin before it aggregates. This lowered overall huntingtin levels, resulting in reduced aggregate formation inside the cell.

The scientists then tested this in an animal model of Huntington’s disease: the worm C. elegans. They confirmed that over-expressing the TBK1 kinase protected against mutant huntingtin toxicity in the worm, preventing the development of the condition. The researchers got similar results in cultured neurons.

“We are very excited about these findings,” said Lashuel. “TBK1 has also been shown to regulate the clearance and degradation of proteins implicated in other neurodegenerative diseases. Mutations in TBK1 have also recently been linked to ALS and result in impaired autophagy, which leads to the accumulation of aggregates. Our goal is to find small molecules or drug pathways and to develop these for multiple neurodegenerative diseases.”

The study was published in The Embo Journal.