The prodrug developed by researchers caused long-term remission in all murine models of high-risk or drug-resistant cancers with fewer side-effects than a comparable drug. 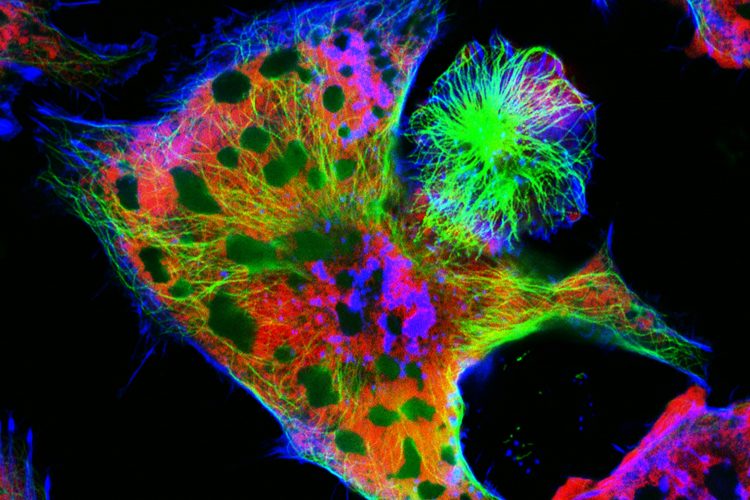 Neuroblastoma cells: nuclei are stained in red, microfilaments are in green and blue.

High-risk solid tumours, such as neuroblastoma, Ewing sarcoma and rhabdomyosarcoma remain challenging to treat because they show limited response to currently available therapies, including chemotherapy, and can quickly develop resistance. In addition to being ineffective, chemotherapy also causes severe and undesirable side-effects including diarrhoea, bone marrow suppression and secondary malignancies. These are particularly hazardous in the many children which suffer from these cancers.

In a new study, researchers demonstrated that an enhanced treatment developed in their lab can cause long-term remissions in 80 to 100 percent of mice with drug-resistant or high-risk solid tumours. The research, which the team said could soon lead to clinical trials, was published in Cancer Research.

“The results of our studies show that the cancer therapeutic we developed is highly effective in treating at least three different types of high-risk paediatric solid tumours with intrinsic or acquired drug resistance,” said Dr Garrett Brodeur, Director of the Cancer Predisposition Program at the Children’s Hospital of Philadelphia (CHOP) and co-senior author of the study, along with Dr Michael Chorny and Dr Ivan Alferiev. “Given that this treatment is also likely to be much less toxic than most cancer therapies for these types of tumours, in addition to showing remarkable therapeutic effects against aggressive disease, we think these results warrant further exploration of the agent in clinical trials.”

The agent the team designed is a prodrug, meaning it is inert until the body converts it into a pharmacologically active drug. The drug, called SN22, which this agent becomes belongs to a family of compounds called camptothecins. Camptothecins promote cell death and other family members have previously been used to treat solid tumours (eg, irinotecan and topotecan). However, they are often ineffective against high-risk disease because the tumours are either initially resistant to the drug or develop resistance over time. The team explained that irinotecan is also a prodrug whose active agent, SN38, shows limited efficacy because it rapidly gets inactivated and removed from the body, so only a small fraction of it reaches the tumour. At the same time, irinotecan cause serious side-effects, including bone marrow suppression and intractable diarrhoea.

To overcome the issues of poor efficacy and high toxicity, the researchers engineered a prodrug that links four residues of a pharmacologically enhanced drug through a breakable bond to a four-arm polyethylene glycol scaffold. By attaching the SN22 components in this way, the research team explained they were able to extend the drug’s circulation time, which in turn allowed 50 to 100 times as much drug to be taken up by the tumour.

The modified structure also protects SN22 from enzymes that could inactivate it and cell transporters that could transport the drug out of tumour cells, said the scientists. They added that the combination of these modifications allows more drug to accumulate in the tumour, where it stays without being exported, resulting in high drug levels that are sustained for hours and days.

In several mouse models of high-risk cancers, prodrug delivery of SN22 resulted in complete tumour disappearance in all models, and these complete remissions lasted for more than six months in 80 to 100 percent of cases. In comparison irinotecan had little or no effect. The models used included neuroblastoma with both intrinsic and acquired drug resistance, a chemotherapy-resistant Ewing sarcoma and a fusion-positive rhabdomyosarcoma.

Aside from its high efficacy, the team reported the engineered prodrug also had less toxicity than irinotecan. Where irinotecan led to elevated liver enzymes and altered blood counts, the SN22 prodrug did not, nor did it lead to any other adverse effects. The researchers added that delivery in a prodrug formulation reduces the exposure of healthy organs to the active drug and the increased potency of the treatment means less total drug is needed to shrink the tumours. As a result they were able to use a ‘low and slow’ approach that exposes tissues to a low level of drug over long period of time.

“Taken together, the superior efficacy and improved biocompatibility of our prodrug, which we demonstrated in several clinically relevant models of high-risk cancer, make it a highly promising new therapeutic capable of addressing the considerable limitations of current treatments,” said Chorny. “Our strategy is readily scalable, and we look forward to assessing its effectiveness and safety in patients.”