Using CRISPR to cut out fusion genes, scientists were able to specifically induce cancer cell death in murine models of sarcoma and leukaemia. 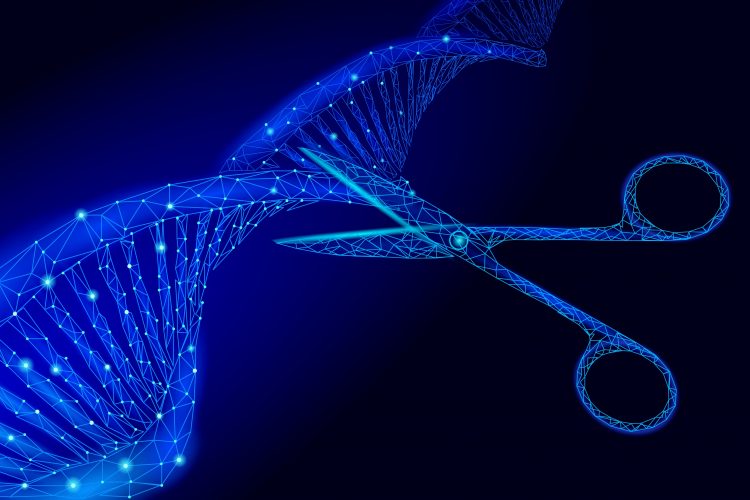 Researchers have used the CRISPR-Cas9 gene-editing tool to induce cell death in cancer cells containing fusion genes. The approach resulted in the elimination of tumour cells in cell lines and murine models of Ewing’s sarcoma and chronic myeloid leukaemia (CML). The team suggest their approach could open the door for highly specific cancer therapies, able to destroy cancerous cells without affecting healthy ones.

Fusion genes are caused by a chromosomal rearrangement during cell division. They are the result of two DNA fragments, often belonging to completely different chromosomes, joining so that two genes that were never intended to interact are brought together. If the error is not beneficial, then the cell will die – eliminating the fusion gene. However, some fusion genes confer a reproductive or survival advantage, allowing the carrier cell to multiply, forming a tumour. One example of this is BCR-ABL which causes CML.

“Many chromosomal rearrangements, and the fusion genes they produce, are at the origin of childhood sarcomas and leukaemias,” explained Sandra Rodríguez-Perales, leader of the Molecular Cytogenetics Unit at the Spanish National Cancer Research Centre (CNIO) and lead co-author of the study. Fusion genes are found in roughly 20 percent of all cancers including, among others, prostate, breast, lung and brain tumours.

Fusion genes do not occur in healthy tissues and are therefore a highly attractive drug target for cancer therapies, because any therapy targeting a fusion gene should be highly specific and have no effect on normal tissues.

The CRISPR gene-editing tools have become a favoured method for targeting fusion genes because they can be programmed to target specific sequences of the genome and cut and paste DNA fragments to induce modifications in a controlled way.

In their study, the CNIO team leveraged the CRISPR-Cas9 tool to eliminate tumour cells by cutting out the fusion gene driving tumour development. They performed their experiments in cell lines and mouse models of Ewing’s sarcoma and CML.

According to the researchers, this is the first time CRISPR has been successfully applied for the selective elimination of fusion genes in tumour cells. They added that earlier strategies were based on adding a DNA sequence that induces cell death at the junction between the two fused genes, but this method of introducing foreign sequences proved to be very ineffective at eliminating tumours.

Instead of introducing a sequence, Raúl Torres-Ruiz, co-author of the paper, explained that they used CRISPR to make cuts in the introns at either end of the fusion gene: “In trying to repair those breaks on its own, the cell will join the cut ends which will result in the complete elimination of the fusion gene located in the middle”. Fusion genes are essential for the survival of tumour cells, so this repair automatically causes the cell to die.

Rodríguez-Perales concluded: “Our next steps will be to carry out more studies to analyse the safety and efficiency of our approach. These steps are essential to know if our approach can be translated in the future into a potential clinical treatment. Furthermore, we will study whether our strategy, which we have already seen works in Ewing’s sarcoma and chronic myeloid leukaemia, is also effective in other types of cancer caused by fusion genes and for which there are currently no effective therapies.”