Using cryo-electron microscopy and site-specific mass spectrometry, researchers have mapped the glycans that shield HIV from the immune system. 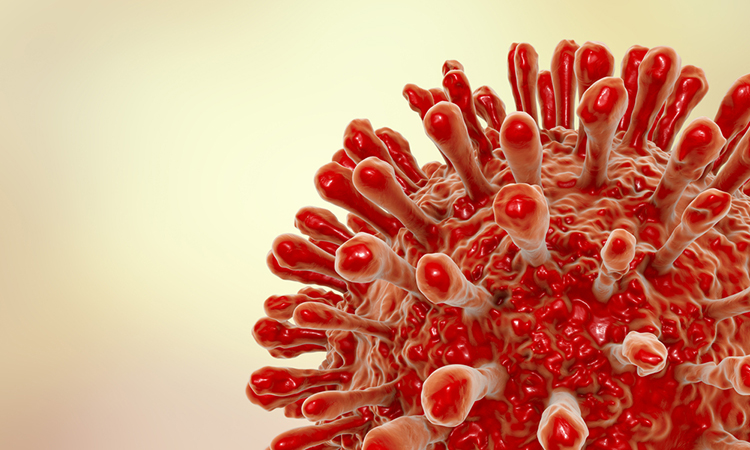 Scientists have devised a method for mapping in unprecedented detail the sugar molecules, or glycans, that help shield HIV from the immune system. The team was made of scientists from Scripps Research and Los Alamos National Laboratory, both US.

According to the researchers, mapping these shields will yield a more complete understanding of why antibodies react to some spots on the virus but not others and may shape the design of new vaccines that target the most vulnerable and accessible sites on HIV and other viruses.

The team say that the glycans are loose and stringy and function as shields because they are difficult for antibodies to grip and block access to the protein surface. The shields form on the outermost Spike (S) proteins of HIV and many other viruses, including SARS-CoV-2, because these viruses have evolved sites on their S proteins where glycan molecules – normally abundant in cells – will automatically attach.

“We now have a way to capture the full structures of these constantly fluctuating glycan shields, which to a great extent determine where antibodies can and cannot bind to a virus such as HIV,” said the study’s lead author Dr Zachary Berndsen, from Scripps Research.

The same flexibility that makes these sugary molecules resistant to antibodies has made them impossible for researchers to capture with traditional atomic-scale imaging. In the new study, the scientists developed techniques that, for the first time, allow these elusive molecules to be mapped in great detail on the surface of the HIV S protein, known as Env.

The team combined an atomic-scale imaging method called cryo-electron microscopy (cryo-EM) with sophisticated computer modelling and a molecule-identifying technique called site-specific mass spectrometry. By integrating cryo-EM with the other technologies, the researchers were able to recover this lost glycan signal and use it to map sites of vulnerability on the surface of Env. 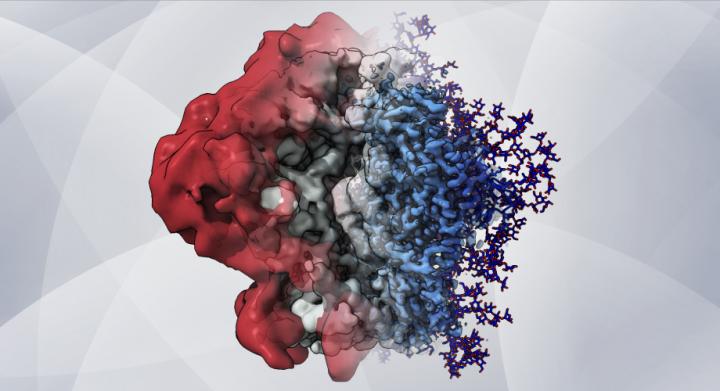 An artistic rendering – based on cryo-EM maps and computer simulations – shows how glycans create a shield that helps HIV hide from the immune system [credit: Dr Zachary Berndsen, Ward lab at Scripps Research].

“This is the first time that cryo-EM has been used along with computational modelling to describe the viral shield structure in atomic detail,” said Dr Srirupa Chakraborty, co-lead author from Los Alamos National Laboratory.

The new approach revealed the glycans’ structure and dynamic nature in extreme detail and helped the team better understand how these complex dynamics affect the features observed in the cryo-EM maps. From this, the researchers observed that individual glycans do not move around randomly on the S protein’s surface, but instead clump together in tufts and thickets.

“There are chunks of glycans that seem to move and interact together,” Berndsen said. “In between these glycan microdomains is where antibodies apparently have the opportunity to bind.”

Experimental HIV vaccines rely on modified, lab-made Env proteins to elicit antibody responses. In principle, these vaccines’ effectiveness depends in part on the positioning and extent of the shielding glycans on these lab-made viral proteins. Therefore, Berndsen and colleagues applied their method to map the glycans on a modified HIV Env protein, BG505 SOSIP.664, which is used in an HIV vaccine currently being evaluated in clinical trials.

“We found spots on the surface of this protein that normally would be covered with glycans but were not and that may explain why antibody responses to that site have been noted in vaccination trials,” Berndsen said.

The team say that this finding showed that Env’s glycan shield can vary depending on what type of cell is being used to produce it. In HIV’s infections of humans, the virus uses human immune cells as factories to replicate its proteins.

In another discovery, the team observed that when they used enzymes to slowly remove glycans from HIV Env, the entire protein began to fall apart. They suspect that Env’s glycan shield, which has been considered merely a defence against antibodies, may also have a role in managing Env’s shape and stability, keeping it poised for infection.

The team expect that their new glycan-mapping methods will be particularly useful in the design and development of vaccines, not only for HIV. Many of the techniques can be applied directly to other glycan-shielded viruses such as influenza viruses and coronaviruses and can be extended to certain cancers in which glycans play a key role, the researchers say.