By combining nanobodies targeting different regions of the SARS-CoV-2 Spike protein, researchers were able to protect cells from infection. 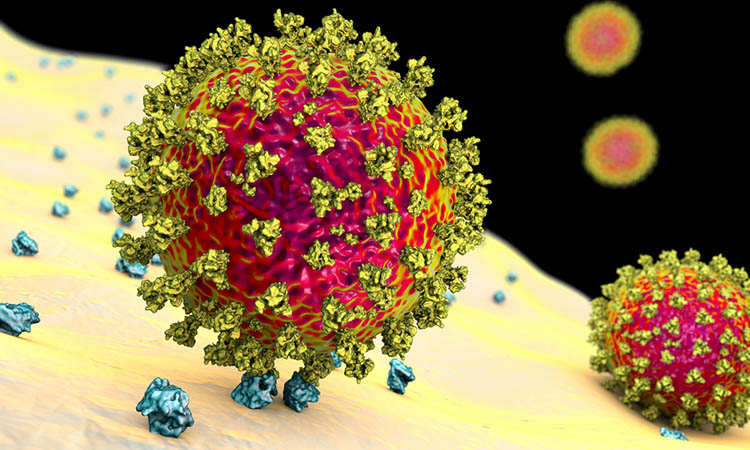 Researchers have developed combined nanobodies which can neutralise SARS-CoV-2, even if it mutates. According to the team, the nanobodies could be developed a drug treatment for use in those critically ill with COVID-19, the disease caused by SARS-CoV-2, or people that may not be able to receive a COVID-19 vaccine, such as the immunocompromised.

Nanobodies are small fragments of antibodies, also known as single-domain antibodies (sdAb), produced by camelids such as alpacas, llamas and camels. Some believe they may make better therapeutics than full-sized antibodies because they are significantly smaller, more stable and easier to produce cost-effectively on a large scale.

The binding of Spike (S) proteins on the surface of the SARS-CoV-2 coronavirus to angiotensin converting enzyme 2 (ACE2) receptors on human cells is what allows the virus to enter human cells. Therefore, scientists suggest preventing this interaction could prevent infection.

In a new study, researchers at Sweden’s Karolinska Institutet, in collaboration with researchers at the University of Bonn, Germany, and the Scripps Research Institute, US, generated and screened nanobodies for their ability to inhibit the interaction between the SARS-CoV-2 S protein and ACE2. They identified four with an exceptional ability to block the virus’ ability to spread among human cultured cells and then worked to combine them to create new structures that would continue to neutralise the virus even as it mutates.

“What is uniquely special here is that we have stitched together nanobodies that bind to two different places on the S protein of the virus,” explained one of the study’s corresponding authors, Martin Hällberg, a researcher at the Department of Cell and Molecular Biology at Karolinska Institutet. “This combination variant binds better than individual nanobodies and is exceptionally effective in blocking the virus’ ability to spread between human cells in cell culture.”

He said his ‘favourite’ nanobody was from the llama, because “it binds directly over the surface where the virus binds the host cell receptor ACE2” and also has a number of the amino acids critical for binding with ACE2. Because of this similarity to ACE2, it is unlikely that the virus will mutate sufficiently to develop resistance to this nanobody while retaining its ability to interact with ACE2. Hällberg also revealed that during their experiments the SARS-CoV-2 virus never managed to mutate sufficiently to escape one of their combinations, in which this llama nanobody was linked to one from an alpaca.

Dioscure Therapeutics, a spin-off company from the University of Bonn, will be conducting further testing of the nanobodies in clinical trials. Meanwhile, the researchers at Karolinska Institutet will attempt to improve the ability of the combined nanobodies to bind by changing individual building blocks in the nanobodies.