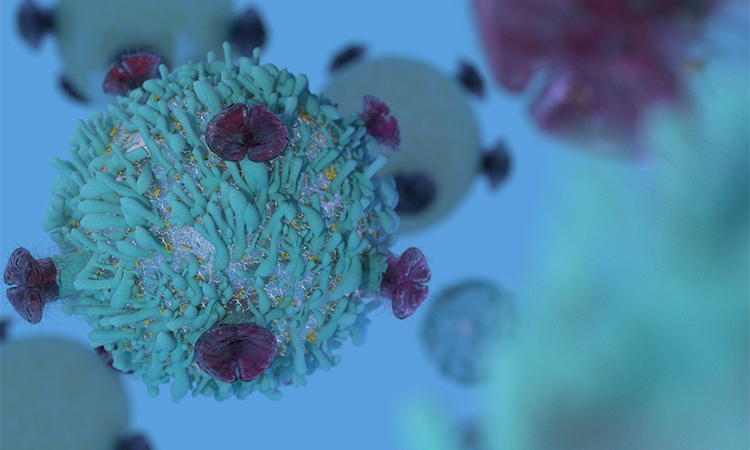 Cancer can often trigger T-cell exhaustion after forcing the body’s immune system to stay active to fight the disease, therefore causing T cells to lose their function of killing tumorous cells. In a new Nature Immunology study, University of Pittsburgh and UPMC Hillman Cancer Center, both US, researchers report that the low oxygen environment of tumours can prompt exhausted T cells to suppress the immune system instead of combating cancer.

“We often think about our immune system in absolutes: Certain types of cells are ‘good’ and some are ‘bad,’” said senior author Dr Greg Delgoffe. “The key takeaway from our work is that our immune system is critically sensitive to its local environment. In the right environment, cells typically thought to be anti-cancer can switch sides and work against us.”

The new study, which was led by Dr Paolo Vignali, also showed that targeting low oxygen levels reduced the suppressive nature of exhausted T cells and improved response to immunotherapy.

Delgoffe and Vignali elaborated on the study’s findings and how they could inform the next steps of developing therapies. The researchers used flow cytometry to validate CD39 expression.

What are exhausted T cells and what role do they play in cancer and other diseases?

Vignali: Exhausted T cells are an adaptive response to too much “signal.” These signals can come from pathologic sources, such as a cancer or a virus, but they also arise in healthy tissue, so we find exhausted T cells in autoimmune disease, where the immune system inappropriately attacks the host, and in the placenta where the mother’s immune system adapts to the growing foetus. In these settings, T cell exhaustion is a good thing: It helps control unwanted damage by activated T cells.

What did you learn about exhausted T cells in this new study?

Delgoffe: As exhausted T cells no longer do their job of killing cancer cells well, they have become the target of immune-based therapies for cancer. The idea is that if we can reinvigorate them, they will effectively kill cancer cells again. What we learned in our study is that when exhausted T cells enter tumours, they do not just become less functional themselves; they change the environment around them to actively turn off other cells nearby. In other words, exhausted T cells are not just failing to work for us; they are actively working against us.

Vignali: The idea that exhausted T cells are working against us in cancer opens new avenues for immunotherapy, such as developing treatments to target the pathway responsible for switching sides or engineering better T cells for cell-based therapies. While the immunotherapy field has rightfully been focused on correcting T cell loss of anti-cancer functions, our efforts show we should also be studying potential new behaviours gained by these cells.

Were you surprised by any of the results?

What do your findings suggest about therapies to target exhausted T cells?

Delgoffe: The observation that the local tumour environment dictated whether exhausted T cells were immunosuppressive was a clue. It told us that if we could reprogram or modulate the local environment, perhaps the suppressive nature of these cells could be reversed. And that turned out to be the case: We used drugs that do not specifically target T cells but rather change the battlefield they are fighting on by targeting tumour vasculature and metabolism. We found that making conditions more favourable was enough to get exhausted T cells within these treated tumours to temper those anti-inflammatory functions, which improved tumour response to several immune-based cancer therapies.

Vignali: The finding that we could reverse anti-inflammatory functions in exhausted T cells is particularly exciting. Many large, sophisticated studies have taught us that most features of exhausted T cells are irreversible — they are stuck being poor tumour killers. However, the battle between the immune system and cancer is a delicate balancing act. Here, our data show that we can target the battlefield and shift the balance in favour of immune cells, even in large aggressive tumours.

What are the next steps for this research?

Delgoffe: We are currently running several clinical trials in Pittsburgh using these environment-modulating drugs in cancer patients. The next big question will be whether we can reverse the immunosuppressive character of exhausted T cells in these patients. We are also interested in developing drugs that directly target T cells’ suppressive character in patients. Beyond cancer, exhausted T cells also appear in chronic infections like hepatitis and HIV, autoimmune diseases such as lupus and type 1 diabetes, and in the gut. Discovering the role for these cells and their suppressive character in other contexts will be a new direction for this research.

Dr Greg Delgoffe is an Associate Professor of Immunology at the University of Pittsburgh’s School of Medicine and director of the Tumor Microenvironment Center at UPMC Hillman Cancer Center.

Dr Paolo Vignali is a student at the University of Pittsburgh’s Medical Scientist Training Program.