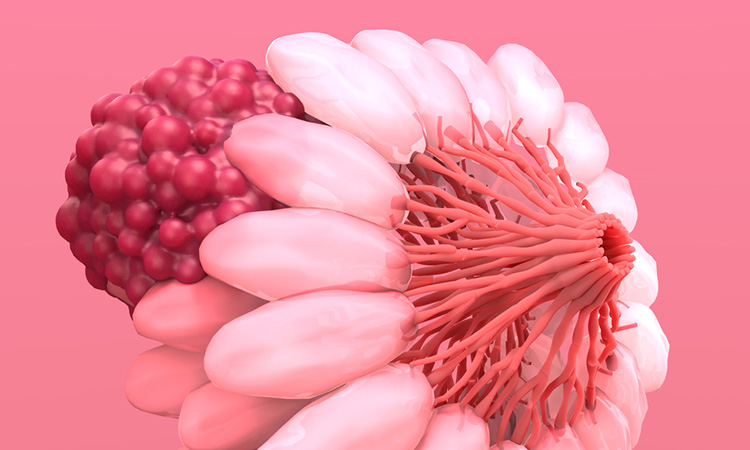 Scientists at the Georgia Institute of Technology, US have found a new way to create breast tumour models, which could be faster, more reliable and have significantly less immune variability than existing models. The breakthrough, recently published in Advanced Materials, has the potential to revolutionise the development of immunotherapy treatments and could also explain why patients with the same type of breast cancer respond differently to therapy.

By using a gel-like matrix as a scaffold to grow breast cancer tumours, the researchers were able to regulate how immune cells filter into a tumour’s microenvironment. In doing so, they created tumour models well-suited to immunotherapy drug testing. Furthermore, by modifying the scaffold, they were able to replicate immune microenvironments seen in treatment-resistant breast cancer patients. This research has provided new models to understand how tumour microenvironments could influence responses to immunotherapies, as well as potentially predicting what therapy a patient will respond to based on the immune characteristics of their tumour.

A disadvantage of current breast cancer models includes the inconsistency between preclinical advances in breast cancer immunotherapy and poor patient outcomes. These models often fail to mimic complex interactions between cancer cells and key immune cells present in the tumour microenvironment. To address this, breast cancer researchers began to inject the tumour cells alongside a commercially sold gelatinous protein mixture derived from mouse cells (Matrigel). However, its composition varies from batch to batch, which creates more unknown variables that can affect a mouse’s immune response in unpredictable ways.

Consequently, the team developed their own synthetic jelly-like matrix, into which they injected triple negative breast cancer (TNBC) cells, the most aggressive type of breast cancer, alongside the matrix as a scaffold to help them grow. They found that their breast cancer tumours formed at a rate of 100 percent and did so faster and with lower variability in growth than when using Matrigel. Most importantly, their scaffold limited the type of immune cells that infiltrated into the tumour microenvironment. Their approach resulted in a controlled environment that is ideal for experiments in immunotherapy drug testing.

Taking a step further, the team created different formulations of the gel matrix by incorporating biomolecular tags readily recognised by immune cells. The tags are made of peptides and serve to recruit key immune cells to the microenvironment. Incorporating the tags enabled the researchers to model different subtypes of immune environments often seen in treatment-resistant TNBC.

The findings show the essential role a patient’s tumour immune microenvironment plays in the success of immunotherapies, emphasising the importance of their new approach for future drug testing. This study carries broad potential for pre-screening immunotherapy drugs for individual patients.