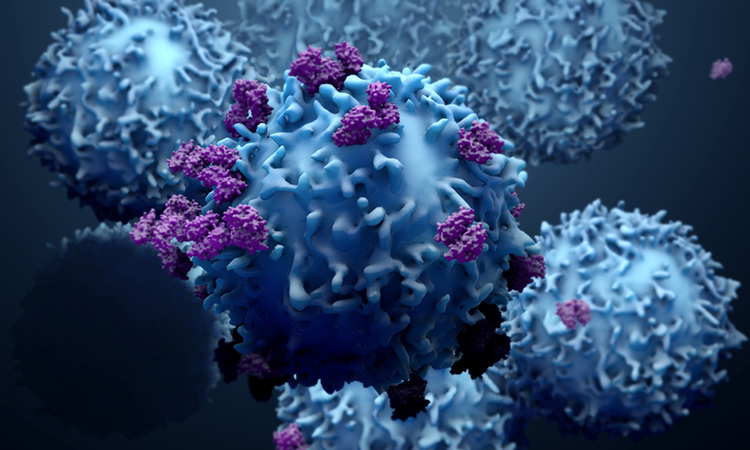 Researchers from Osaka Prefecture University (OPU), Japan have revealed findings that could aid the development of nanoplatforms for direct delivery to T cells to control their functions, a process useful for cancer immunotherapy. The study was recently published in the Journal of Materials Chemistry B.

The researchers performed an experimental study constructing a pH-sensitive delivery system into T cells and their subsets by using carboxy-terminal dendrimers (highly ordered, branched polymeric molecules) bearing phenylalanine (Phe) and hydrophobic acid anhydride (cyclohexanedicarboxylic anhydride, CHex), such as PAMAM-CHex-Phe and PAMAM-Phe-CHex. These dendrimers showed a higher association with splenocyte-derived T cells, which suggests that the hydrophobic effect significantly influences the association of dendrimers with immune cells.

The T-cell association of these dendrimers was examined at different pH and temperatures using fluorescence-activated cell sorting, where murine splenocytes stained with an anti-CD3 antibody were used. Along with this, the association of PAMAM-CHex-Phe and PAMAM-Phe-CHex with some culture cell lines and T cell subsets, such as CD4-positive helper T cells (CD3+CD4+), CD8- positive killer T cells (CD3+CD8+) and activated T cells (CD3+CD69+) was also examined. In order to confirm the internalisation of these dendrimers into T cells, the team used confocal microscopic imaging to observe the intracellular distribution of PAMAM-CHex-Phe and PAMAM-Phe-CHex.

“Although T cells play important roles in various immune reactions, there are only a few reports on delivery systems into T cells. In this study, we applied the Phe-modified dendrimers to a pH-sensitive drug delivery system into T cells. Dendrimers with different amino acids and acid anhydrides were synthesised and their pH-responsive association with T cells and their subsets was investigated,” said Associate Professor Chie Kojima.

This experimental study has successfully presented the findings in terms of synthesis and pH sensitivity of the carboxy-terminal dendrimers bearing Phe; pH-responsive association of the carboxy-terminal dendrimers bearing Phe with T cells and T cell subsets including activated T cells; and internalisation of PAMAM-Phe-CHex and PAMAM-CHex-Phe into T cells.

“Our results showed that Phe- and CHex-modified dendrimers have a delivery potential to T cells and their subsets. This will play a key role in cancer immunotherapy,” concluded Kojima.