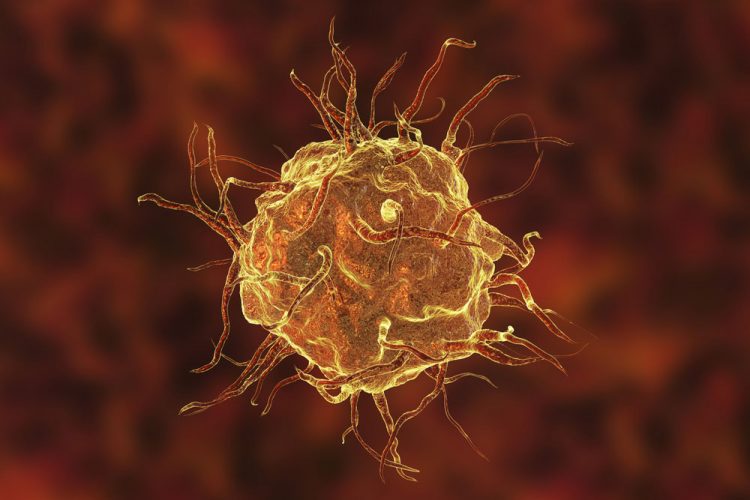 The mechanism our immune cells use to clear bacterial infections like tuberculosis (TB) might also be implicated in Parkinson’s disease, according to a new collaborative study.

The findings provide a possible explanation of the cause of Parkinson’s disease and suggest that drugs designed to treat Parkinson’s might work for TB too.

The most common genetic mutation in Parkinson’s disease patients is in a gene called LRRK2, which makes the LRRK2 protein overactive.

Drugs that block LRRK2 are a promising new treatment for Parkinson’s, with many pharmaceutical companies developing drugs to target LRRK2 and clinical trials underway. But how overactive LRRK2 causes Parkinson’s and why LRRK2 blockers work was a mystery. 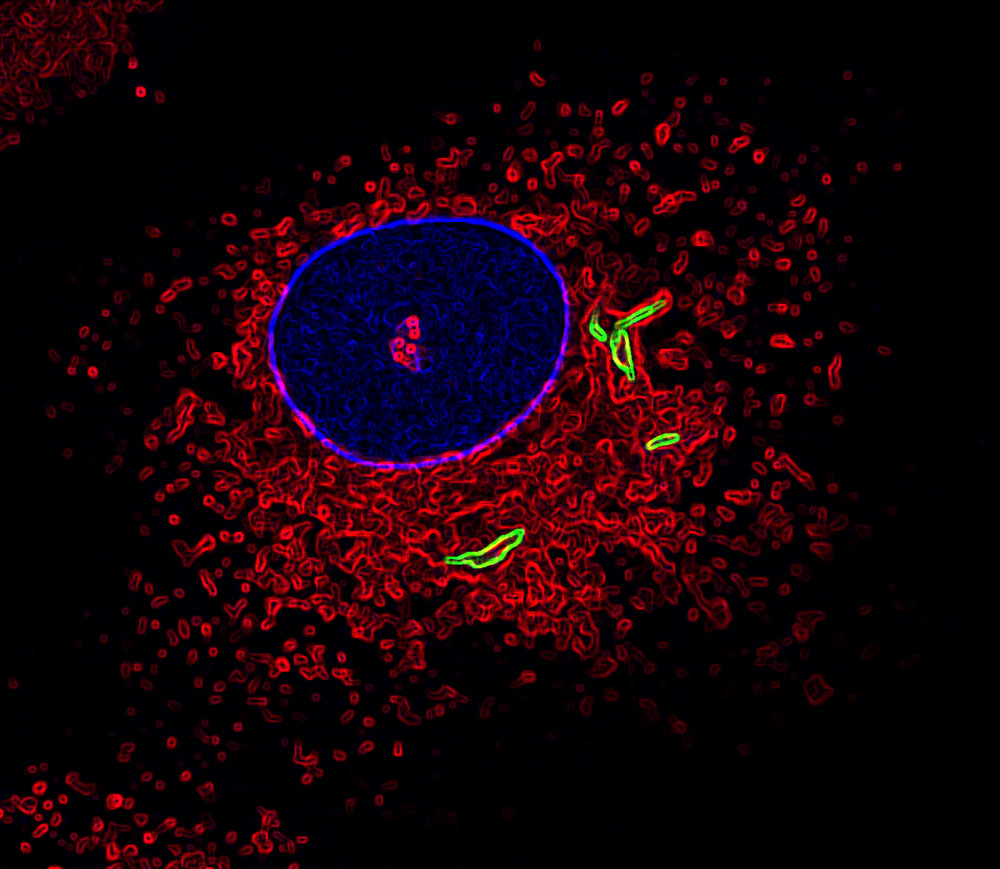 This is an image of a macrophage labelled for the nucleus (blue), fused lysosomes and phagosomes (red) and TB bacteria (green). (Susanne Herbst, Francis Crick Institute)

By studying what LRRK2 does in immune cells called macrophages that are infected with Mycobacterium tuberculosis (Mtb) – the bacterium that causes TB – researchers believe they have uncovered a potential cause of Parkinson’s.

Macrophages recognise and engulf Mtb securing it within tight-fitting internal compartments called phagosomes. Another part of the cell called the lysosome then fuses with the phagosome to destroy the bacterium inside.

Using a combination of experimental approaches the researchers found that LRRK2 prevents phagosomes from fusing with lysosomes in both human and mouse macrophages, making them less efficient at clearing bacteria. Deleting the LRRK2 gene or treating the cells with an LRRK2 blocker significantly reduced levels of Mtb.

These findings in cells were supported by experiments in mice. When the researchers deleted the gene for LRRK2 in mice, they found that they exhibited an enhanced early immune response to TB infection, and had significantly lower levels of Mtb in their lungs than control mice up to two weeks after infection.

“We think that this mechanism might also be at play in Parkinson’s disease, where abnormal masses of a protein called ‘Lewy bodies’ build up in neurons in the brain and cause damage,” said Susanne Herbst, joint first author of the paper and post-doctoral fellow at the Francis Crick Institute, .

The team suspect that LRRK2 might be preventing immune cells in the brain from degrading cell debris properly, leading to a build-up of protein in neurons that disrupts their function.

Dr Herbst added: “By studying TB, we have found a possible explanation for why LRRK2 mutations are a genetic risk factor for Parkinson’s disease. It’s exciting when different fields of research connect up in unexpected ways like this!”

Co-author Patrick Lewis, Associate Professor in Cellular and Molecular Neuroscience at the University of Reading, said: “The dogma in the Parkinson’s field has been to focus almost exclusively on what is happening to neurons in the brain to make them degenerate. But over the last few years, there has been a growing appreciation of the integral role of other cells in the brain and particularly the immune system in keeping neurons healthy. This study reinforces why we should think more broadly about the events that cause neurodegeneration, and that some of the answers to Parkinson’s disease might come from immunology.”

The findings also suggest that LRRK2 inhibitors could be a powerful new way of combating TB, which kills 1.67 million people every year.

“Drug-resistant TB is a serious emerging problem, and boosting the body’s own immune defence against TB is an important step in the battle against antibiotic-resistant strains,” said Max Gutierrez, Group Leader at the Crick and senior author of the paper.

“LRRK2 inhibiting drugs are already being developed to treat Parkinson’s disease and we’re trying to see if we can repurpose them as a potential new TB therapy. This should be relatively straightforward because TB infects the lungs, so the LRRK2 inhibitors wouldn’t need to cross the blood-brain barrier like they do in Parkinson’s disease.”

The study has been published in The EMBO Journal.