According to new research, the protein ALDH4A1 is a possible therapeutic target and diagnostic biomarker for cardiovascular disease. 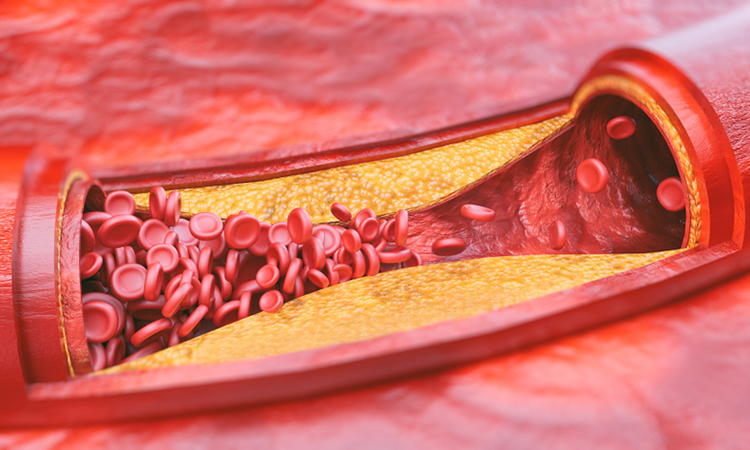 Scientists have identified a mitochondrial protein as a potential marker for the diagnosis of cardiovascular disease (CVD) and as a possible target for future treatments. The study was conducted at the Centro Nacional de Investigaciones Cardiovasculares (CNIC), Spain.

According to the researchers who studied the protein, the leading underlying cause of the blood clots triggering CVD events is atherosclerosis, a chronic inflammatory disease that produces plaques in blood vessel wall composed of cell debris, fats and fibrous material. Atherosclerosis manifests clinically as a thrombosis, which is the principal cause of acute myocardial infarction and stroke.

“We know that atherosclerosis includes an immunological component and that the innate and adaptive immune systems are both involved in the origin and progression of this disease,” explained study leader Dr Almudena Ramiro. However, he highlighted that little is known about the specific response of B cells in these processes or the repertoire of antibodies these cells produce during atherosclerosis.

The study characterised the antibody response associated with atherosclerosis in mice lacking the low-density lipoprotein receptor (LDLR-/-) and fed a high-fat diet. To study the repertoire of antibodies produced during atherosclerosis, the research team performed a high-throughput analysis based on isolating individual B cells and sequencing their antibody genes. According to the researchers, the analysis of the sequences of more than 1,700 antibody genes showed that mice with atherosclerosis produced a distinct antibody repertoire. The production of these antibodies allowed the team to study their targets and their functional properties. 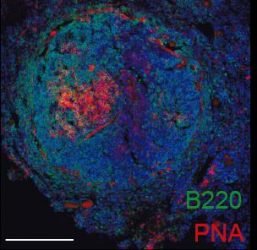 Germinal centre response (red) in the spleen of an atherosclerosis-prone mice [credit: CNIC].

“ALDH4A1 is recognised by the protective antibodies produced during atherosclerosis, making it a possible therapeutic target or diagnostic marker for this disease,” Ramiro said. “The study shows that ALDH4A1 accumulates in plaques and that its plasma concentration is elevated in the atherosclerosis-prone mice and in human patients with carotid atherosclerosis.”

The team also found that infusion of A12 antibodies into the atherosclerosis-prone mice delayed plaque formation and reduced the circulating levels of free cholesterol and LDL, suggesting that anti-ALDH4A1 protein antibodies have therapeutic potential in the protection against atherosclerosis.

“These results broaden our knowledge of the humoral response during atherosclerosis and highlight the potential of the ALDH4A1 protein as a new biomarker and of A12 as a therapeutic agent for this disease,” said Ramiro.

The study is published today in the journal Nature.