A new study shows that upregulating the activity of the ACE2 signalling pathway in kidney cancer cells enhances the effects of clinically used treatments. 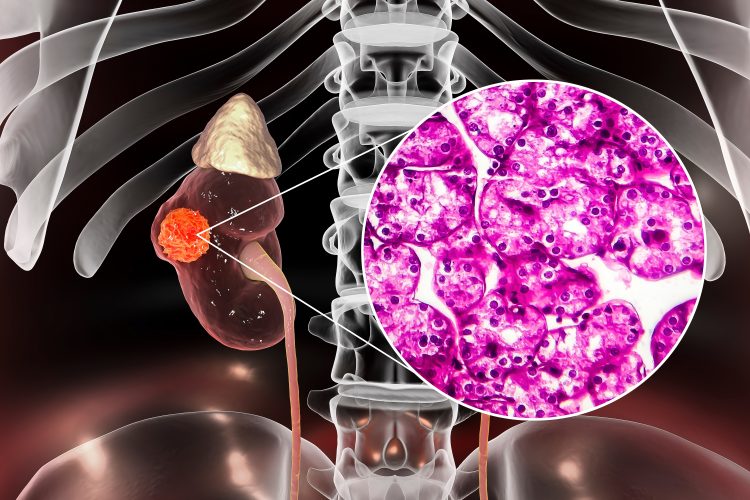 According to researchers, targeting the angiotensin-converting enzyme 2 (ACE2) receptor with a small peptide could increase the efficacy of current treatments for renal cell carcinoma (RCC).

RCC is the most common form of kidney cancer. It has a five-year survival rate of just 12 percent because most patients develop resistance to the existing treatments. Current treatments include inhibitors of the vascular endothelial growth factor (VEGF) and programmed cell death protein 1 (PD-1) pathways. Because resistance is so prevalent, researchers are working to develop new therapeutic combinations that can increase the efficacy.

New research, led by Beth Israel Deaconess Medical Center (BIDMC)’s Dr Rupal Bhatt and University College Cork, Ireland’s Dr Thomas Walther, has shown that ACE2 expression is a good prognostic factor in RCC, that loss of ACE2 mediates resistance to classical treatments and that in pre-clinical models, treatment with a drug that is downstream of ACE2 can improve tumour responses and significantly prolong survival.

“Our team reported that ACE2 is a new protective molecule for RCC and, building on this finding, we show that angiotensin-(1-7), a small peptide generated by ACE2, can be used to control tumour growth in pre-clinical models,” said co-corresponding Bhatt, a medical oncologist at BIDMC and associate professor of medicine at Harvard Medical School, US. “Our findings suggest that angiotensin-(1-7) could be developed in clinical trials as a promising therapeutic option in patients with RCC in combination with current standard of care treatments and has a strong potential to improve overall survival.”

ACE2 is an enzyme that antagonises the classical angiotensin II/AT1 receptor pathway. It is also the receptor SARS-CoV-2 uses to infect cells.

Bhatt, Walther and colleagues found that higher ACE2 expression correlates with better overall survival in patients with RCC. They also demonstrated that VEGF receptor inhibitors, such as sunitinib and axitinib, downregulate ACE2 expression in tumour cells in culture and in mouse models of RCC. Using various methods and techniques, the authors showed that this ACE2 downregulation by VEGF receptor inhibitors is what causes resistance to this approved class of drugs.

In the study, the team also revealed that triple therapy with VEGF pathway inhibitors, anti-PD-L1 and angiotensin-(1-7) is superior to the standard treatment with VEGR and PD-1 pathway inhibition.

“Our work shows that angiotensin-(1-7) could provide a promising therapeutic option in patients with RCC in combination with VEGF-pathway inhibitors,” said co-corresponding author Walther, Professor in Pharmacology at the University College Cork. “Resistance to VEGF-pathway inhibitors is a general problem in cancer treatment and therefore our findings have broader implications for VEGF-pathway inhibitor therapies that beyond RCC could be extended to other types of cancers.”

Study shows how to improve cancer treatment with anti-OX40 antibodies…