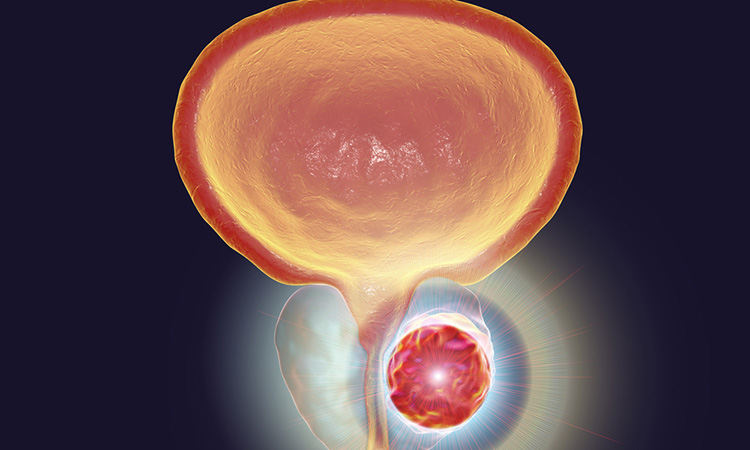 The team, from Baylor College of Medicine, US, found that inhibiting MAPK4 simultaneously inactivated both AR and AKT and stopped cancer growth in animal models. The researchers say the findings open the possibility of targeting MAPK4 in human prostate cancer to provide a novel therapeutic strategy.

“Scientists already knew that both the AR and the AKT pathways can drive prostate cancer,” said corresponding author Assistant Professor Feng Yang. “One complication with targeting AR (for instance, with medical castration therapy, including the most advanced agents such as enzalutamide, apalutamide and abiraterone) or AKT is that there is a reciprocal crosstalk between these pathways. When AR is inhibited, AKT gets activated and vice-versa; therefore tackling these pathways to control cancer growth is complex.”

In previous work, the Yang lab studied the little-known enzyme MAPK4. They found that it is unique because it does not work as conventional MAPK enzymes do. In their previous study, the team discovered that MAPK4 can trigger the AKT pathway, not only in prostate cancer but in other cancers as well, such as lung and colon cancers.

In the current study, the researchers found that MAPK4 also activates the AR signalling pathway by enhancing the production and stabilisation of GATA2, a factor that is crucial for the synthesis and activation of AR.

Further experiments showed that MAPK4 triggered the concerted activation of both AR and AKT pathways by independent mechanisms and this promoted prostate cancer growth and resistance to castration therapy, a standard medical treatment for advanced/metastatic prostate cancer. Importantly, genetically knocking down MAPK4 reduced the activation of both AR and AKT pathways and inhibited the growth, including castration-resistant growth, of prostate cancer in animal models. The researchers anticipate that knocking down MAPK4 also could reduce the growth of other cancer types in which MAPK4 is involved.

“Our findings suggest the possibility that regulating MAPK4 activity could result in a novel therapeutic approach for prostate cancer,” Yang said. “We are interested in finding an inhibitor of MAPK4 activity that could help better treat prostate cancer and other cancer types in the future.”

The findings are published in the Journal of Clinical Investigation.