A range of imaging and computational techniques were used by researchers to discover the structure of the PH domain of PLEKHA7. 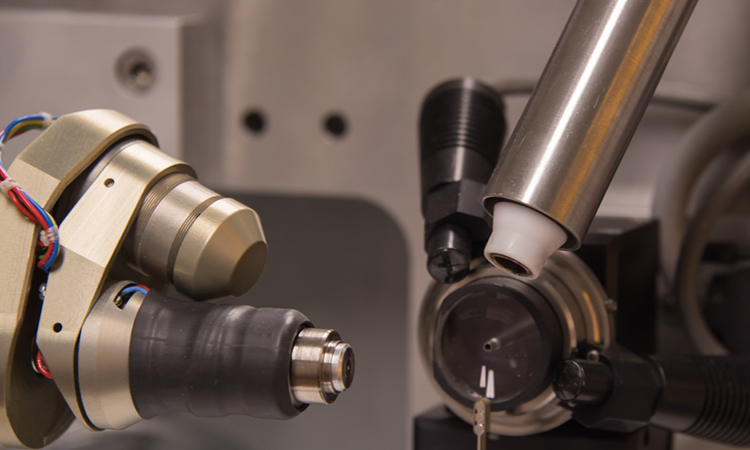 Scientists at Sanford Burnham Prebys, US, have identified, at an atomic level, how a part of a protein called PLEKHA7 interacts with a cell’s membrane to regulate important intercellular communications. According to the researchers, this research points to hotspots within PLEKHA7 as targets for drugs, which could be key in designing treatments for advanced colon, breast and ovarian cancer. 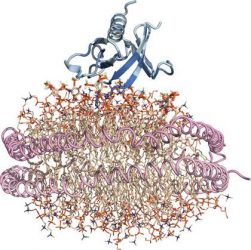 Nanodisc ‘substitute’ cell membrane: Protein is blue, lipids are wheat and the two helical lipoproteins that corral the lipid nanodisc and hold it together are pink [credit: Sanford Burnham Prebys].

The domain in PLEKHA7 that the researchers examined, pleckstrin homology (PH), is commonly found in proteins that regulate the movement of cells as well as other important cellular activities. If the interaction between the PH domain and the lipids that comprise cell membranes is disrupted, diseases such as cancer can occur.

“PH domains have been studied for some time but examining their interactions with membrane-associated lipids has been challenging,” said Professor Francesca Marassi, corresponding author of the study. “We optimised our structural investigations by using an artificial membrane disc several nanometres in size. This nanodisc is a ‘substitute’ cell membrane and has been an important tool in overcoming obstacles in studying structural aspects of fatty interfaces, such as those involving lipids.”

The investigators used several techniques to detail the precise areas where the PH domain interacted with lipids in a cell’s membrane. Each of the three techniques was equally important: X-ray crystallography provided a snapshot of the structure; magnetic resonance showed the precise association of the PH domain with the lipid membrane surface; and computer simulations put all of this information together to generate a dynamic movie of the interaction.

“We were able to determine that the PH domain interacts with the cellular membrane at several locations simultaneously, thereby demonstrating the key role of the membrane as a platform for directing cell signalling and adhesion,” said Marassi. “We found at least three sites along the PH domain that are engaged in binding lipids. Having multiple sites is crucial, because if you think of the PH binding sites as a zipper between proteins and lipids, each additional notch engaged by a zipper makes the binding stronger and more resistant to being pulled apart.”

One of the reasons the scientists were interested in exploring PLEKHA7 was that the protein has recently been identified as a potential anticancer target. However, its molecular mechanism of action has been uncertain. Additionally, the researchers were interested in the PH domain because it has been implicated in advanced breast, renal and ovarian cancers and most prominently plays an important role in colorectal cancer.

“Clinicians have shown that PLEKHA7 is elevated in patients with colorectal cancer and its levels increase as the disease worsens. It has also been shown that inhibiting PLEKHA7 decreases cellular proliferation and migration,” said Marassi. “Therefore, the PLEKHA7 PH domain might be a useful drug target, but more work is needed to develop agents with greater potency and optimised pharmacological properties.”

The scientists hope to share their structural images for researchers to screen for drugs that target the PH domain and lipid membrane binding sites.

The study was published in the journal Structure.