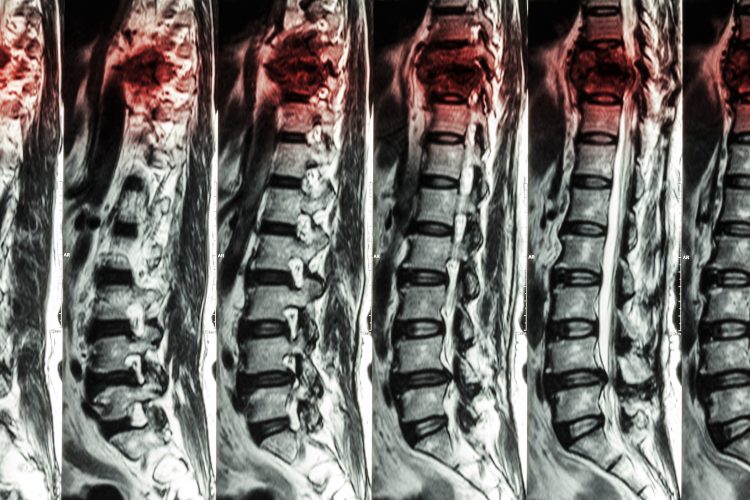 “We are the first to show that spinal cord injury results in an energy crisis that is intrinsically linked to the limited ability of damaged axons to regenerate,” said Dr Zu-Hang Sheng, study co-senior author, senior principal investigator at the US National Institute of Neurological Disorders and Stroke (NINDS).

According to the team, energy levels are damaged because the mitochondria that produce adenosine triphosphate (ATP) for neurons are located in the axons. When damaged, the mitochondria are unable to produce ATP at the same level.

“Nerve repair requires a significant amount of energy,” said Dr Sheng. “Our hypothesis is that damage to mitochondria following injury severely limits the available ATP and this energy crisis is what prevents the regrowth and repair of injured axons.” 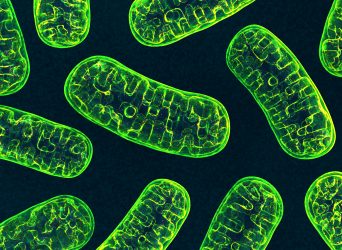 The scientists suggest that this is compounded by the anchoring of mitochondria in adult cells alongside the axons, so once damaged they are hard to replace.

Using a murine model, called a Syntaphilin knockout, where mitochondria are free to move along the axons, the researchers showed that when mitochondria are more mobile, mice have significantly more axon regrowth across the site of SCI compared to control animals. The paper also demonstrated that newly-grown axons made appropriate connections beyond the injury site, leading to functional recovery of motor tasks.

They hypothesised that increasing mitochondrial transport and thus the available energy to the injury site could enable repair of damaged nerve fibres.

When fed creatine, a compound that enhances the formation of ATP, both the control and knockout mice had increased axon regrowth following injury, compared to mice fed saline instead. More robust nerve regrowth was seen in the knockout mice that received creatine.

“We were very encouraged by these results,” said Dr Sheng. “The regeneration that we see in our knockout mice is very significant and these findings support our hypothesis that an energy deficiency is holding back the ability of both central and peripheral nervous systems to repair after injury.”

Dr Sheng highlighted that despite the promising results of the study published in Cell Metabolism, genetic manipulation was required for the best regrowth as creatine produced only modest regeneration. He concluded that further research is required to develop therapeutic compounds that are more effective in entering the nervous system and increasing energy production for the treatment of SCI.

Experiments exploring the role of immune and glial cells in wound healing and neural repair has revealed that Plexin-B2, an axon guidance protein, is essential for their organisation after SCI.

The researchers suggest their findings could aid in the development of therapies that target axon guidance pathways for treatment of SCI. 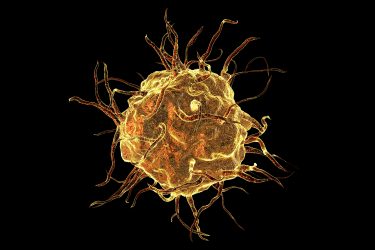 An artist’s impression of a macrophage.

The paper published in Nature Neuroscience reveals that Plexin-B2 on macrophages and microglia is essential for the process of corralling, where microglia and macrophages are mobilised and form a protective barrier around the site of SCI, separating healthy and necrotic tissue. In this study, researchers found that corralling begins early in the healing process and requires the ability of Plexin-B2 to steer immune cells away from colliding cells.

When they deleted Plexin-B2 from the microglia and macrophages in tissues, it led to tissue damage, inflammatory spillover and hindered axonal regeneration.

The lead investigator Dr Hongyan Jenny Zou, Professor of Neurosurgery and Neuroscience at the Icahn School of Medicine at Mount Sinai, US, said the results were “quite unexpected.”

She concluded that understanding the signalling pathways and interactions of glial cells with each other and the injury environment is fundamental to improving neural repair after a traumatic brain or spinal cord injury.

Microglia surround macrophages at the site of a CNS injury

Another study exploring the interactions of macrophages and microglia has revealed that in the central nervous system (CNS), microglia interfere with macrophages preventing them from moving out of damaged regions of the CNS.

“We expected the macrophages would be present in the area of injury, but what surprised us was that microglia actually encapsulated those macrophages and surrounded them – almost like police at a riot. It seemed like the microglia were preventing them from dispersing into areas they should not be,” said Jason Plemel, a medical researcher at Canada’s University of Alberta and a member of the Neuroscience and Mental Health Institute. 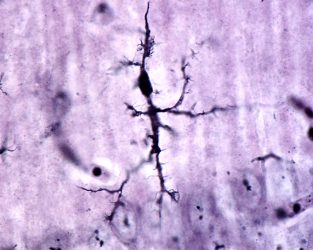 A microglial cell stained with Rio Hortega’s silver carbonate method under the microscope.

Plemel said that more research is required to ascertain why this is happening, but they found that “both the immune cells that protect the CNS, microglia and the immune cells of the peripheral immune system, macrophages, are present early after demyelination and microglia continue to accumulate at the expense of macrophages.

The scientists said that this observation was only possible because they were able to distinguish between microglia and macrophages, which has historically not been possible. Using this technique, they established than one type of microglia responded to demyelination. The results were published in Science Advances.

“The indication of at least two different populations of microglia is an exciting confirmation for us,” said Plemel. “We are continuing to study these populations and hopefully, in time, we can learn what makes them unique in terms of function. The more we know, the closer we get to understanding what is going on (or wrong) when there is neurodegeneration or injury and being able to hypothesise treatment and prevention strategies.”

NSCs have the potential to differentiate into many neural cell types depending on the environment and have been the subject of investigation in both the field of SCI repair and neurodegenerative disease therapies.

However, the senior author of this study Dr Martin Marsala, professor in the Department of Anesthesiology at University of California (UC) San Diego School of Medicine, US, explained the current delivery techniques involve direct needle injection into the spinal parenchyma – the primary cord of nerve fibres running through the vertebral column, so “there is an inherent risk of (further) spinal tissue injury or intraparenchymal bleeding.”

The novel technique Dr Marsala proposed in a paper published in Stem Cells Translational Medicine, is to inject these cells into the spinal subpial space – an area between the pial membrane and the superficial layers of the spinal cord.

“This injection technique allows the delivery of high cell numbers from a single injection,” Dr Marsala explained. “Cells with proliferative properties, such as glial progenitors, then migrate into the spinal parenchyma and populate over time in multiple spinal segments as well as the brain stem. Injected cells acquire the functional properties consistent with surrounding host cells.”

The team now intend to move their experiments from rats to larger pre-clinical animal models, more anatomically similar to humans. “The goal is to define the optimal cell dosing and timing of cell delivery after spinal injury, which is associated with the best treatment effect,” concluded Dr Marsala.

And the award goes to…

Dr Mohamad Khazaei is the recipient of the STEM CELLS Translational Medicine’s (SCTM) Young Investigator Award for his work on SCI.

The award recognises advancements in the field of stem cells and regenerative medicine made by young researchers. The recipient is the principal author of an article published in SCTM that, over the course of a year, is deemed to have the most impact. 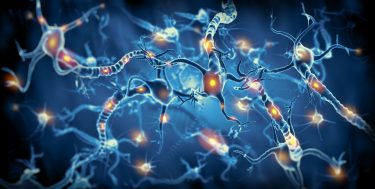 His winning paper details how Dr Khazaei and his team used neurons and oligodendrocytes to obtain better functional recovery after SCI.